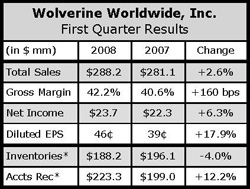 Continued strong performance by Merrell and  to a lesser extent Patagonia  prompted Wolverine World Wide, Inc. to raise its earnings guidance for 2008.  The company now expects 2008 earnings per share in the $1.83 to $1.90 range from the companys previous guidance of $1.80 to $1.88.  Revenues should still be in the $1.23 billion to $1.26 billion range. The earnings per share estimate amounts to growth of 6% to 11%, or roughly twice revenue growth of 3% to 6%.


Krueger said sales by WWWs Outdoor Group, which consists of the Merrell and Patagonia brands, increased in the upper single-digit range primarily on the strength of Merrell. Earnings from the two brands grew three times as fast as sales and both brands order backlogs ended the quarter with strong double-digit percentage increases.  The Outdoor Group continues to be the companys largest revenue and earnings generator.  Krueger said the backlog skewed toward orders due for delivery in the third and fourth quarter, indicating good demand for fall.

“The entire product line performed well in Q1, but Merrell had an especially strong spring season in the multi-sport category, including the new aqua sport Chameleon Speed and the women's Siren product line and the women's Casual category,” said Blake Krueger, CEO and president.  “The quality of Q1 sales was even stronger when compared to the prior year as the sales mix for the quarter included substantially less close out and discontinued merchandise.”

Profits rose 6.3% to $23.7 million, while earnings per share rose 17.9% to 46 cents, thanks to a stock buyback. Gross margins rose 160 basis points to 42.2% from the year-ago quarter with the bulk of the improvement, or 70 basis points, coming from gains on the conversion of euro profits back into the dollar.  An improved mix of higher margin goods and better initial pricing margins accounted for 40 and 50 basis points respectively. Steve Gulis, VP and acting CFO, said he expected margin growth to slow by half over the remainder of the year.

Wolverine generated 40% of sales and 70% of profits offshore during the first quarter, even as the European, and particularly the U.K. economy, appeared to soften, Krueger said.

Revenues rose 2.6% to $288.2 million for the quarter. Gulis said the companys Merrell and Sebago brands, owned-retail operations and royalty-based licensing and distributor businesses had the strongest revenue growth rates.  Currency benefits of 2.6% offset fewer re-orders for the companys other brands, which include Wolverine and Hytest in the work boot market, Hush Puppies in casual footwear, Bates in the military/law enforcement market and licensed brands Harley Davidson and Caterpillar.

First-quarter selling and administrative expenses rose 70 basis points to 29.6% of revenue, or $85.2 million. Most of the increase reflects increased spending on product marketing and retail placement initiatives, particularly for Merrell, which is launching its apparel line. Sales of Merrell apparel are expected to hit $12 million to $15 million this year, Krueger said. Total Merrell sales were $400 million last year.

Wolverine ended the quarter with 4% less inventory and attributed a 12.2% rise in accounts receivable to strong spring shipments towards the end of the quarter. Day sales outstanding remained below 60 days.

Krueger said retailers pulled back on their at-once orders during the front half of the quarter, but that pre-season orders picked up on the back half as dealers got a better handle on the Spring season. All retail channels were going “narrower and deeper,” Kruegers phrase for buying more of fewer, top-selling models. He said independent specialty retailers appear to be managing their inventory well, in part by delaying at-once and pre-season orders.

However, he warned that inventory could accumulate in department stores if their comparable store sales continue to decline. He said he thought retailers inventory of athletic shoes was higher than their stores of brown shoes.

WWW continued to build Merrells global retail footprint by adding 15 new shops in the quarter. It now has more than 500 concept stores 0in place in more than 100 countries.  The companys first company-owned Merrell store in Whistler, Canada is exceeding expectations and plans are proceeding to open more U.S. stores, including a flagship store on Union Square in San Francisco. Krueger said comp sales at all Wolverines 91 stores were down 1-2% during the quarter. That includes about 72 outlet stores and 19 Merrell stores and Track and Trail stores. E-commerce sales were up 40%. 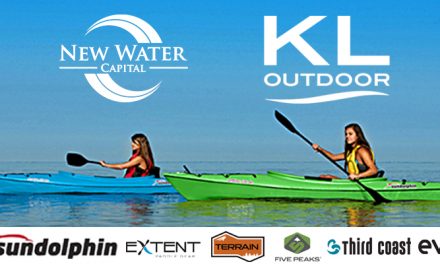