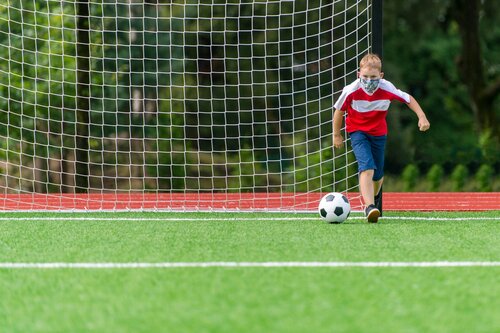 An SFIA webinar headlined by executives at LeagueSide and Morning Consult provided some optimism from community youth sports organizations on recovery prospects as teams have found a way to return to play over the summer and early fall. However, a warning about potential disruptions as winter sports gets underway was also heard.

During the seminar, Evan Brandoff, CEO and co-founder of LeagueSide, a  youth sports sponsorship platform, and Alex Silverman, senior reporter, business of sports at Morning Consult, an online survey research technology firm, presented the latest results of its surveys on the recovery of youth sports from COVID-19.

Morning Consult surveyed 482 parents with kids playing organized sports between July 6-10. LeagueSide polled 137 organizers or board members of entities operating youth sports programs in the U.S. between June 21 to July 21. The poll was a follow-up on similar surveys taken in early May by Morning Consult and April by LeagueSide.

The findings were encouraging with 29 percent of league organizers commenting that their program was at risk of shuttering permanently due to COVID-19, down from 46 percent in the LeagueSide’s April survey.

Brandoff said close to 80 percent of youth sports organizations in LeagueSide’s network of 10,000 organizations returned to play this fall season.

“Warm weather seemed to curb COVID-19 to a certain extent, and leagues were able to get back in action during the fall,” said Brandoff.

Confidence appears to have grown as funds arrived with the restart of leagues. LeagueSide’s April survey found 60 percent of programs generate more than three-quarters of their revenue from registrations.

The latest survey also found 29 percent of organizers received some sort of government support, such as the Paycheck Protection Program or Economic Injury Disaster Loans.

More broadly, the survey found parents of kids playing sports still have major concerns about the safety of play and the viability of local sports programs. Fifty-five percent of parents in the June Morning Consult survey indicated they are worried a program their kid participates in could close, up slightly from 54 percent in May.

Another concerning finding cited during the seminar was the latest national survey of sports parents commissioned by the Aspen Institute which found parents’ fears of illness from COVID-19 increased for its third consecutive survey despite kids returning to play.

“It’s unfortunate that there isn’t one source that is trusted by all where scientifically people could speak to whether it’s safe to return to play or not,” said Brandoff. “All that said, at Leagueside, we acknowledge that people are returning to play, regardless of whether we think it’s right or wrong, and it’s our job to just make sure that as they return to play, they’re able to do it safely. And we’re connecting their organizations with the right sponsors to provide them with the right resources, the money and the PPE (personal protective equipment) they need to make sure that kids are returning safely.”

Looking ahead, Brandoff said the surveys and anecdotal data show that winter sports will likely represent a challenge to the recovery of youth sports including “a chance that COVID gets worse again” as people head indoors during colder months.

Brandoff also said that it appears that the low rate of COVID-19 during summer play was helped by the virus’ inability to spread as much in warm weather, and cold weather may increase infection risk. Finally, he said that cold weather leads to indoor sports, which could require more sterilization of equipment, more limits on spectators, and other safety measures versus outdoor activity.

“There’s a high probability that we’re not going to have sports, as usual, this winter,” said Brandoff. “Indoor facilities might be closed, or the cost may be prohibitive.” He’s heard gyms charging significantly more to use their space because of the cleaning costs and other safety protocols required to ensure safe indoor play.

Brandoff is encouraging LeagueSide’s network of sports program providers to “start being creative” and rethink their sport due to the safety and costs challenges. For instance, in semi-cold climates, some organizations have proactively shifted their basketball program to outdoor soccer programs to play on a blacktop surface to give kids a place to stay outdoors and active.

“Maybe it’s not the same type of programming that you were doing last winter, but it’s about making sure that kids are staying active this winter, whether it’s finding an outdoor space that you can shift your basketball program to or switching to do a sport that’s more conducive for outdoors,” said Brandoff. “Just doing something to keep kids active is so important.”

Brandoff pointed to the many positives of being active in youth development including kids that play sports being healthier both physically and mentally as adults and being more likely to do well in school and go to college. He pointed to a study that showed 95 percent of Fortune 500 CEOs played sports in their youth.

Said Brandoff, “I think it’s going to take a lot of preparation from organizers, being creative, being scrappy, to figure out unique ways to create sports programs outside of the norm of the past few years and that preparation needs to start now.”

He also noted that while virtual training and practice has taken off and is part of the solution, it doesn’t come close to matching the benefits of playing games in person. He said, “Playing sports over Zoom just isn’t as much fun as being with your friends in person.”

The study found the majority of programs are limiting attendance and enforcing social distancing among spectators but mask requirements remain a struggle.

Other insights from the seminar include:

The webinar can be viewed here.