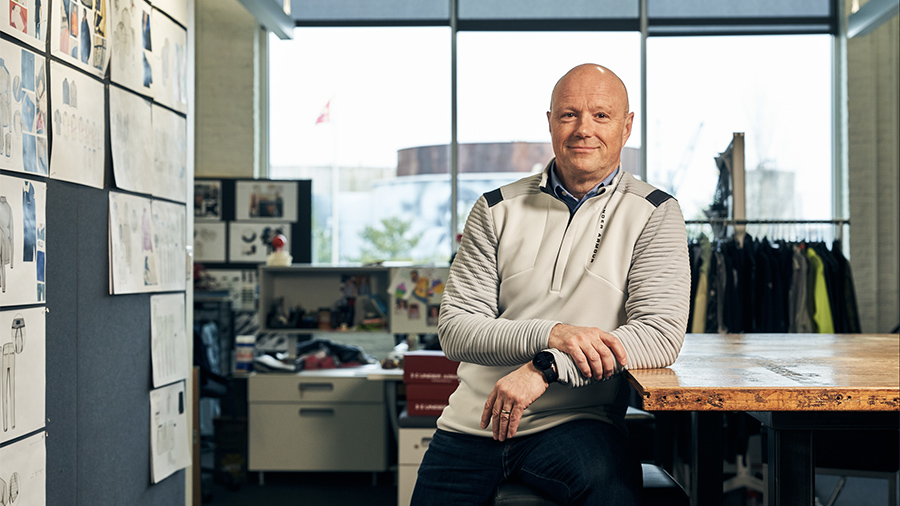 Last week’s news that Under Armour CEO Patrik Frisk is stepping down next month after a little more than two years in the position was met with expectations that the company would prioritize growth, but two analysts on Wall Street downgraded the company’s stock as Frisk’s departure creates uncertainty about the company’s direction.

Effective June 1, Frisk will step down but stay as an advisor to support the transition through September 1, 2022. Under Armour’s board has initiated a search for his replacement.

Colin Browne, COO, will become interim president and CEO, effective June 1. Browne joined Under Armour in 2016 as president of global sourcing, served as chief supply chain officer between 2017 and 2020 and has been COO since February 2020.

Frisk has earned praise for executing a multi-year restructuring that has streamlined inventories, culled unprofitable divisions and endorsements, and optimized the company’s global go-to-market strategy.

During his tenure, Under Armour’s revenues increased by $704 million, and its operating margin expanded to 9.3 percent from a trough of 3.1 percent in FY17.

However, Under Armour’s stock has sharply declined so far in 2022, including a 24-percent one-day drop on May 6 after the company reported results for its March quarter that slightly lagged Wall Street expectations and provided weak guidance for the current year as it continues to deal with supply chain disruptions and COVID-related lockdowns in China.

A roundup of Wall Street analysts and their take on Under Armour’s CEO transition follows.

Morgan Stanley lowered its rating to “Equal-weight” from “Overweight” and reduced its price target to $11 from $14. “Today’s CEO departure announcement, on top of pre-COVID performance challenges and last quarter’s miss and full-year guide below, impair our confidence in the turnaround,” wrote analyst Kimberly Greenberger.

The downgrade follows an upgrade in February by Morgan Stanley, but Greenberger admitted that the call was wrong because supply chain disruption was worse than expected, leading to elevated freight expenses and order cancellations. China has also underperformed for Under Armour due to COVID-related lockdowns.

Greenberger further wrote that while industry channel checks suggested ongoing UA momentum in the marketplace, “this anecdotal evidence has not shown up concretely in results.”

Finally, she said Frisk’s departure “signals a potential lack of confidence that the turnaround is on track and/or nearing an inflection point.”

Williams Trading downgraded Under Armour from “Buy” to “Hold” and slashed its price target from $22 to $10 when the news of Frisk’s departure was released.

Analyst Sam Poser said the weaker-than-expected FY23 guidance was primarily due to supply chain challenges, and he added that he had been impressed by the progress made under Frisk at improving Under Armour’s execution.

“Mr. Frisk’s departure appears related to UA’s board’s need for revenue growth,” wrote Poser. “Patience is often a virtue especially coming off all the macro upheavals of the past two years. Now it’s unclear who’s going to drive the car, when someone will be seated and how much time the board will give the new CEO to win the race, or if the new CEO will be capable of doing so. Yesterday’s announcement is disappointing given our view that Under Armour is a much better company today than it has been over the past 6-or-7 years.”

Poser added that he did not believe that the pending CEO departure meant Under Armour would miss its FY23 guidance, “but it does mean that the uncertainty about what’s happening at UA makes it difficult to step up and buy the stock at its current level.”

Komp said investors could take a favorable view of a potential change in direction for UA with its stock significantly down year-to-date and underperforming peers. Komp wrote, “While we believe UA made significant progress in improving operations, inventory management and overall brand health in recent years, we also are optimistic that the brand can attract the right candidate who can help restore confidence in the longer-term potential for faster and profitable growth.”

Cowen kept its “Outperform” rating at a $17 price target. Analyst John Kernan said the CEO transition added some uncertainty to the stock. He wrote, “The Under Armour narrative gets a new reset following a challenging stub quarter and initial guidance to start FY23 with Patrik Frisk stepping down from his role as CEO. Our $17 price target is 21x FY24E EPS. We see a path to $1 in EPS by FY26 but expect macro uncertainty and a heightened competitive environment to create additional volatility in sentiment and the financial model.”

Stifel kept its “Hold” rating at a $15 price target. Analyst Jim Duffy wrote, “Patrik Frisk’s departure comes as a surprise, though we expect continuity under the interim leadership of Mr. Browne. Mr. Frisk is a clear thinker and talented executive, and his contributions to Under Armour have been tremendous over the past five years. Importantly, he leaves Under Armour a much stronger company than when he joined. Looking forward, we see Under Armour at an interesting juncture with the stock now valued on tangible earnings power versus the structural potential for margin improvement. Accordingly, we see value creation more dependent on revenue growth and believe Under Armour’s CEO search should prioritize global brand leadership talent with a proven track record for unlocking incremental growth.”

BMO Capital Markets maintained its “Outperform” rating at a $19 price target. Analyst Simeon Siegel wrote, “UA’s decision to pivot CEOs presumably signals a desire to push past restructuring and reignite growth. Although COVID-19 helped companies focus on profits over growth, it seems the board is ready for growth. But why? UA remains a large business, likely still under-earning and we believe shares are too inexpensive. As it embarks on its next chapter, we hope it remembers that growth at all costs got it (and others) into trouble in the first place. At these prices, focusing on brand health can prove the easier path to upside.”