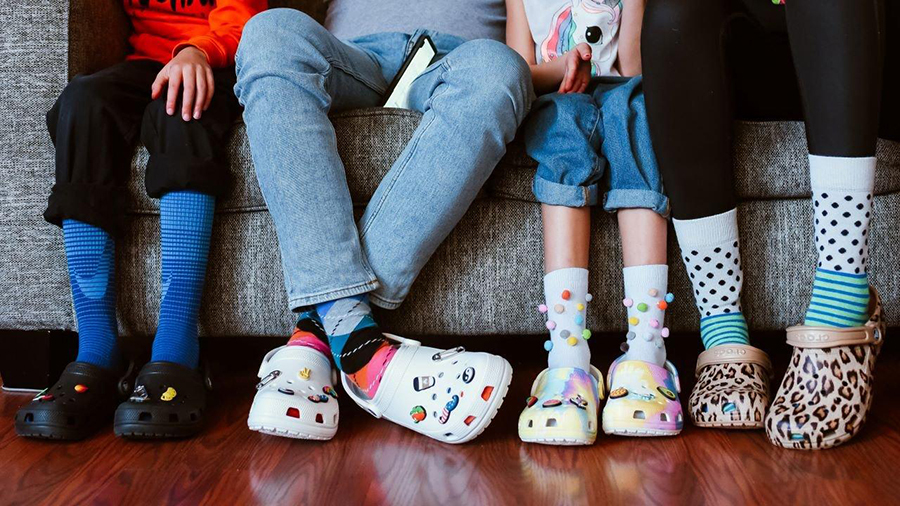 Analysts issued largely bullish reports following Crocs unveiling a five-year plan at its Investor Day that calls for a nearly tripling of its sales, driven by major growth targets in digital, sandals and China.

The following is a summary of analyst views on Crocs’ five-year plan:

»Williams Trading reiterated its “Buy” rating and increased its price target from $193 to $200.

Analyst Sam Poser said the presentation “reinforced and improved our already positive view of the current trends and future opportunities for the Crocs brand and the CROX stock price.”

He noted that for the first time, Crocs “clearly admitted” to its past mistakes of over-expanding its product line, over distributing products and opening too many stores that happened before new management led by Andrew Rees began to arrive in 2014.

Poser wrote, “We are confident that CROX is positioned very well to achieve its long-term targets. We have believed for some time that targeted distribution of innovative product that builds upon the sensibilities of the Crocs’ iconic clog and enhanced by innovative marketing and taking authentic actions such as supporting front line health care workers led to the recent success of both the CROX stock and the Crocs brand.”

The analyst expects growth to get help by an expanded TAM (total addressable market) for clogs, seen growing to $8 billion globally from $6 billion, secular tailwinds behind casualization, comfort and personalization and an enhanced brand positioning due to its link to “supporting self-expression.” He also cited underpenetrated areas in sandals and Asia, particularly China.

Komp also sees ESG (environmental, social and governance) investments paying off for Crocs as the brand elaborated on plans to introduce bio-based Croslite in its Classic Clogs in early 2022 and its targeted 50 percent reduction in its carbon footprint per pair of shoes by 2030. With other community/inclusion initiatives, the ESG emphasis is expected further enhance its relevance. Komp wrote, “ESG becoming a brand strength.”

»B. Riley Securities reiterated its “Buy” rating on Crocs and raised its price target to $174 from $151.

“We believe there is still significant room for CROX to grow as CROX’s innovation, comfort, personalization, new products, social marketing, and inclusivity drives significant penetration among consumers,” wrote analyst Susan Anderson. “Additionally, we see growth opportunity internationally in both top-line and margin, further expanding top-line growth in the U.S., and growth in non-clog styles. With CROX laying out a clear plan to maintain their industry-leading margins coupled with strong growth, we believe there is still significant upside as management kicks off their plan to expand beyond clogs and grow the international business.”

Anderson called out the opportunity in China as it represents less than five percent of Crocs’ revenue despite its footwear sales accounting for 20 percent of the global footwear market. She stated, “As management continues to invest and build brand awareness in China and COVID restrictions subside, we expect growth to accelerate. We note CROX has already partnered with actress Yang Mi and is continuing to see strong follower growth on Douyin (Chinese version of TikTok).”

Among products, she believes Crocs “has now cracked the code” in sandals with various styles of personalized sandals, including slides, two-strap and flip flops, and she believes the growth targets for Jibbitz “could prove conservative.” Anderson also noted that Crocs’ officials indicated they are exploring new categories such as socks, bags and t-shirts to drive incremental revenue over the next five years.

Analyst Jim Duffy wrote, “We are impressed by execution to date, sustainability goals and view the confident growth outlook and repurchase program as an endorsement of growth opportunities for the foreseeable future.”

He called out the brand’s sustainability ambitions, describing them as “a standout in footwear and apparel and illuminates a position of relative advantage in sustainability versus the peer set.”

Duffy wrote, “Crocs has demonstrated an impressive turnaround, driving improvements in brand relevance and desirability. Multi-year reductions in SG&A expense introduce opportunities for operating leverage on sales growth. The concentration of strength in a single region (North America) and single silhouette (clogs 72 percent of FY20 footwear mix) is concerning and subject to fashion risk. Accordingly, we believe it prudent to be valuation sensitive.”

»Piper Sandler raised its price target to $212 from $185 and reiterated its “Overweight” rating.

Among the growth drivers, digital’s growth is expected to be boosted by further scaling third-party marketplaces and their own dot com and the launch of a dedicated Crocs app. Murphy wrote of the app, “We believe this could mirror that of the SNKRS app from the perspective that it allows Crocs a permanent portal for their hot collaborations and frequent drops. Too, consumers who download apps tend to be stickier consumers which convert at higher rates.”

While Vietnam is Crocs’ largest manufacturing region, Murphy added that the company is not expecting any near-term impact from factory shutdowns in the region and appears less concerned than athletic shoe vendors. The analyst wrote, “While the extent to which southern Vietnam remains shuttered from here could impact Q4 (from our perspective), we believe the company is working to accelerate manufacturing in China (and other regions). Too, unlike other footwear companies, the simplicity of the Crocs product (simple, injected-molded product) allows for a lot more flexibility versus other athletic peers.”