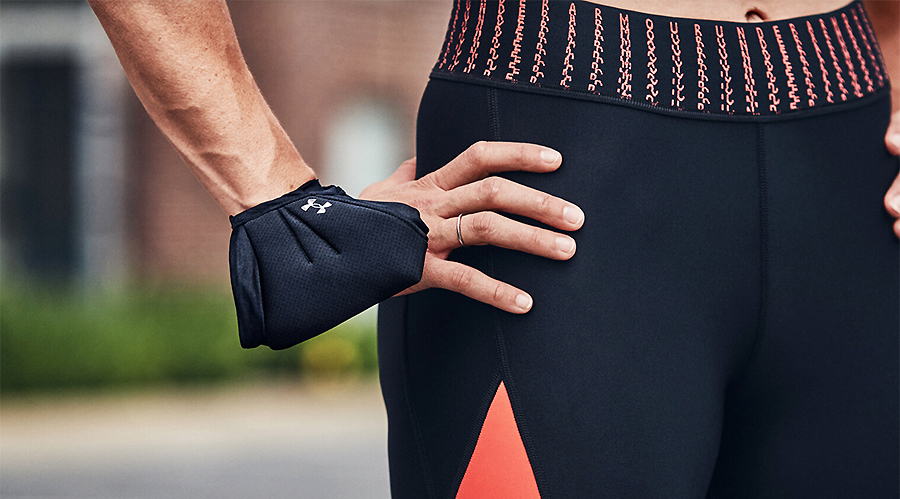 Under Armour Inc.’s revenues tumbled 41 percent in the second quarter, but significant declines are also expected in the second half – in the range of 20-to-25 percent – due to uncertain consumer spending, inventory constraints and a likely promotional climate.

›First, as consumers returned to stores, “it is difficult to forecast the rate at which normalization might take place, as well as demand related to shopping behaviors and conversion.”

Under Armour noted that as its own and wholesale partner doors have reopened, the overall rate of conversion is higher, but traffic trends continue to be considerably lower than the prior-year period, and traffic trends are expected to remain lower for the remainder of 2020.

Bergman also said the pandemic’s impact, including possible retrenchments, is difficult to predict.

›Second, Under Armour’s inventory was up 24 percent at the quarter’s end to $1.2 billion, but the brand significantly reduced planned inventory purchases in the quarter with the pandemic’s emergence and “may not have adequate supply” should the second half recover at a higher rate than planned.

›Third, due to store closures and the inability to reduce supply as fast as demand, a “highly promotional” environment is expected to materialize in the second half. Combined with “a critical mass” of merchandise expected to be sold in off-price channels in the third and fourth quarters, the expected promotional climate “should contribute to meaningful gross margin pressure for the balance of the year,” said Bergman.

On the positive side, Under Armour’s President and CEO Patrik Frisk said second-quarter results came in better than expected with significant e-commerce growth and a sharp pickup in engagement through its Connected Fitness platforms, led by MapMyRun. The company was also encouraged by some recovery seen in June and July and is making progress resetting the brand to jumpstart growth, but he also didn’t predict a quick recovery.

“We continue to anticipate a significant impact on our business in the near term due to the pandemic based on a high level of uncertainty around consumer sentiment and shopping behaviors,” said Frisk. 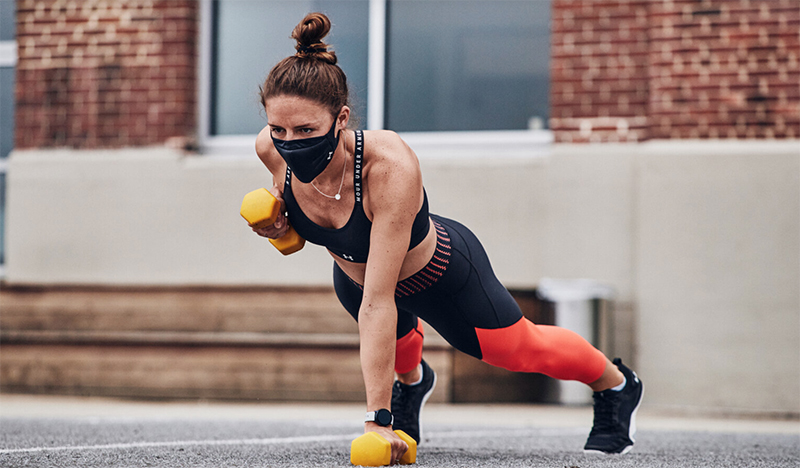 Q2 Revenues Drop 41 Percent
In the quarter ended June 30, revenue was down 41 percent to $708 million and off 40 percent on a currency-neutral basis. About 80 percent of the locations where Under Armour is sold globally were closed in mid-May due to COVID-19. The decline was still better than the 50-to-60 percent decline that UA previously anticipated due to more favorable results across both wholesale and direct-to-consumer (DTC).

DTC business was down 13 percent to $368 million as store closures were only partly offset by strong eCommerce growth.

Licensing revenues plunged 75.5 percent to $6.2 million driven by demand impacts related to COVID-19 and ongoing challenges with its licensing business in Japan.

North America Impacted By Store Closures And Fewer Off-Price Sales
By region, sales in North America declined 44.9 percent (44.8 percent currency-neutral) to $449.8 million. The decline reflected the wholesale door closures coupled with significantly lower year-over-year sales to the off-price channel. As of Friday, most owned and wholesale partner doors in North America have reopened.

In the EMEA region, sales fell 38.7 percent (37.2 percent currency-neutral) to $89.1 million, driven by store closures offset by strength in eCommerce. As of Friday, most doors have reopened in the EMEA region.

Asia Pacific’s revenues were down 20.0 percent (16.8 currency-neutral) to $123.3 million, driven by lower brick & mortar traffic offset by online strength. Most stores have reopened in the region.

In Latin America, sales plunged 71.9 percent (68.4 percent currency-neutral) to $11.1 million. Less than half of owned and partner retail locations were open by the end of June and about two-thirds are now reopened.

Gross margin in the quarter increased 280 basis points to 49.3 percent, driven by channel mix which benefitted from significantly lower sales to the off-price channel as well as a higher mix of DTC sales partially offset by the negative impact from COVID-19-related discounting.

The operating loss in the quarter was $170 million. Excluding the impact of restructuring and impairment charges, the adjusted operating loss was $131 million.

Under Armour ended the quarter with cash and cash equivalents of $1.1 billion.

During the quarter, the company amended its credit agreement to provide improved access to liquidity during this period. Under the amended $1.1 billion revolving credit facility, $250 million was outstanding at the end of the quarter.

Additionally, the company issued $500 million of convertible senior notes utilizing $440 million of the proceeds to reduce the amount outstanding under its revolving credit facility. 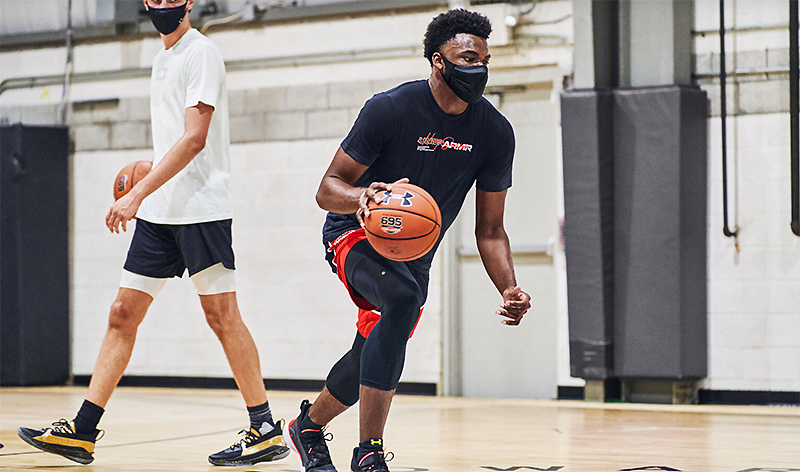 Four Near-Term Objectives For Under Armour
On the call, Frisk highlighted four main areas Under Armour is “hyper-focused” on currently.

“First, we’re working to rebuild the brand through increased engagement and consideration with our target consumer – the focused performer. Second, we’re further evolving our operating model to simplify the way we work and collaborate, including accelerating the digitization of our go-to-market process to drive greater efficiency and speed. Third, we’re reprioritizing a DTC-first approach to elevate our brand experience and deepen our connection with Under Armour consumers. And finally, through all of these efforts, we’re heightening the discipline on profitability and reconstructing our ability to drive sustainable shareholder value over the long term.”

Elaborating on the early payback from some of these initiatives, Frisk noted that Under Armour saw a “significant increase” in the usage of its digital apps as well as “steady meaningful” increases in new users throughout the quarter as targeted content, social events and key influencer workouts reached fitness enthusiasts looking to workout at home.

Said Frisk, “After six months of activating our reengineered marketing and brand platform, we believe that consumers are getting more consistent clarity about who we are and what we stand for – the human performance company with products designed to make you better.”

To support a premium positioning in the marketplace, the company in April and May reduced inventory purchases for the back-half of the year against its original plan by nearly 30 percent in response to COVID-19-impacted demand expectations. The move comes after Under Armour ended 2020 with the “healthiest global inventory position that we’ve had in several years.”

Part of that effort includes reducing sales to the off-price channel. Bergman noted that off-price sales are still expected to represent a mid-single-digit percentage of overall global sales in 2020, which he called “another meaningful year over year stepped down.”

Under Armour is also elevating the importance of e-commerce and full-price retail to deepen its brand connection with consumers with a particular focus on North America in the near-to mid-term. Upgraded personalization and content will be a focus online.

Fourth Run Cushioning Platform Arriving In 2021
On product, Frisk noted that the Hovr Machina continues to be a top seller in running that supports the overall Hovr platform and helped nearly double footwear activations year-to-date. In apparel on the run side, the Fly-By and Launch Shorts as well as the ISO-Chill short-sleeve shirt are seeing healthy demand.

Said Frisk, ‘Overall, we remain very encouraged by the emerging strength of our run category. And as we look toward the back half of 2020, after years of development, we’ll introduce our fourth cushioning platform which will launch first in basketball and then quickly move to run for Spring/Summer 2021 — further capitalizing on the momentum we’re building as we offer Under Armour’s most pinnacle running footwear expression yet.”

In women’s, strong demand was seen in the quarter for the Play Up short, the Infinity and Mid-Crossback sports bras, and the Meridian joggers pants.

After donating 5 million masks and 4 million gowns to local hospitals across Maryland, the launch of the UA Sportsmask for consumers has seen an “extremely strong” initial launch. Frisk added, “We are working hard to catch up with orders as quickly as possible.”

The company is also testing a number of new concepts at retail to encourage full-price selling as part of its overall goal of improving its ability to be profitable over the long term.

Frisk concluded, “When the global markets stabilize, however, the new normal is defined, we believe that the efforts we’re putting into building the Under Armour brand, strengthening our supply chain, prudently managing inventory, employing a more favorable cost structure, and harnessing a reengineered demand creation engine, puts us in a better position to benefit from shifts in consumer behavior and an increasingly more-discerning athletic consumer.”