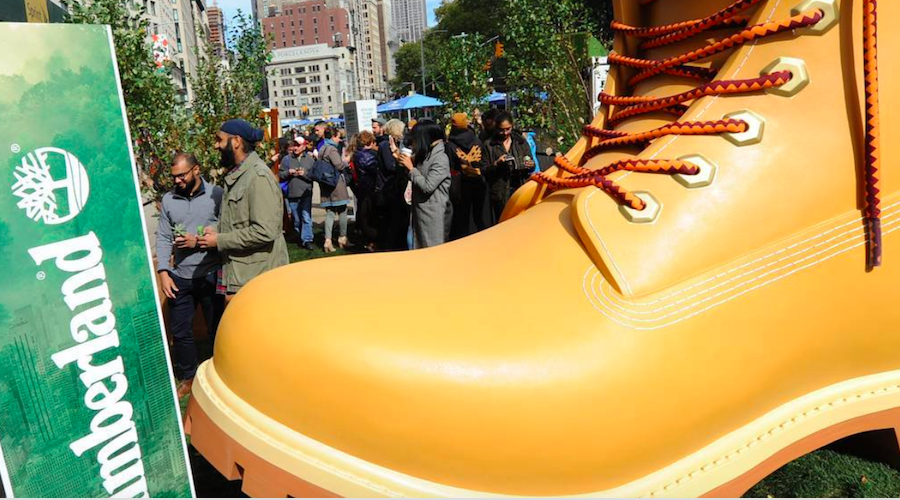 Timberland saw a small sales decline in the second quarter ended September 30 due to the impact of a customer bankruptcy in the workwear channel and the timing of shipments. VF Corp., the brand’s parent, still expects Timberland to show a gain of 2 to 4 percent in fiscal 2019.

Sales in the quarter were down 2 percent for the brand and slid 1 percent on a currency-neutral basis.

“Results for Timberland were muted for the quarter,” said Steve Rendle, VF Corp’s chairman, president and CEO, on a conference call with analysts. “However, we have visibility to improve performance in the second half of this year, and we remain confident in our long-term aspirations for the brand.”

By channel globally, DTC (direct-to-consumer) was down 3 percent for Timberland in the quarter although digital was a bright spot, expanding more than 25 percent. Wholesale revenues declined 2 percent due primarily to shipment timing in EMEA as well as a customer bankruptcy impacting revenues of Timberland PRO, the brand’s work boot offering.

The diversification of Timberland’s business continues with Non-Classic footwear up double digits in both men’s and women’s. Apparel increased globally at a mid-single digit rate.

The 3 percent decline in the Americas overall reflected a 5 percent wholesale decline. DTC growth was ahead 8 percent, boosted by digital growth of more than 10 percent.

VF said Non-Classic footwear sales in the Americas region were up more than 20 percent. The Courmayeur and Sutherlin Bay models were standouts in women’s. VF also noted that excluding the impact of the bankruptcy of a retail partner, Timberland PRO’s sales would have increased high-single digits in the Americas driven by Hypercharge.

In Europe, sales were down 2 percent in the second quarter. Wholesale revenues dipped 1 percent due to shipment timing. DTC sales slumped 7 percent, but DTC digital ran up more than 20 percent.

In the APAC region, the 3 percent gain was driven by a 16 percent hike in wholesale revenues. DTC declined 9 percent due to brick & mortar closures and softness in Japan and Taiwan. DTC digital was still strong, expanding more than 20 percent. Highlights in the APAC region include China, which was up nearly 100 percent with balanced growth across both wholesale and DTC. The Teeboolang 2 marketing campaign drove consumer engagement in China.

Timberland, which was acquired by VF in 2011, remains far off VF’s five-year goal set in September 2014.

At that time, VF said it planned to grow Timberland’s revenues by $1.4 billion during the next five years to reach $3.1 billion by the end of 2019, representing growth of 13 percent per year. The growth was expected to be driven by “industry leading innovation and product diversification, consistent channel discipline, meaningful expansion of its direct-to-consumer business and a significant amplification of how Timberland communicates and connects the brand with consumers.”

VF officials have talked up the potential for the brand to expand beyond the iconic Classic Yellow Boot, reach urban consumers through the brand’s “Modern Trail” campaign, and tap underserved categories like men’s apparel and markets like China.

Timberland, however, has achieved only modest gains in ensuing years, including increases of 2 percent in 2017, 1 percent in 2016 and 2 percent in 2015. In 2014, sales grew 13 percent. VF officials have reset the brand’s targets to mid-single-digit annual growth.

On the company’s second quarter conference call, Rendle said the company remains bullish on Timberland’s prospects to improve revenues in the second half and the years ahead.

Rendle said, “We remain very confident in our Timberland brand. And I think what’s giving us that confidence is the work that we’re doing to diversify the offer beyond just the Classics collection of the core boots. We’re seeing momentum in our women’s business, continued success in apparel and most importantly, success–I mean our non-Classics footwear, both men’s and women’s. The PRO category continues to do extremely well, and that sets a really strong technical halo for that boots business.

“So really confident as we look across the product categories. The work we’ve done in Asia over the last 12 months, the marketing that we’re doing with our TeeBooLang marketing campaign, has shown really strong results and great–really good selling in our China marketplace. And I guess the last point would be the work that we’re doing to build a strong product foundation, the integrated marketplace, merchandising strategy that will allow us to have that diversified approach here in the U.S. market where we’ve got the most work to do, a lot of confidence about as we look at that mid-single-digit growth profile on a long-term basis.”