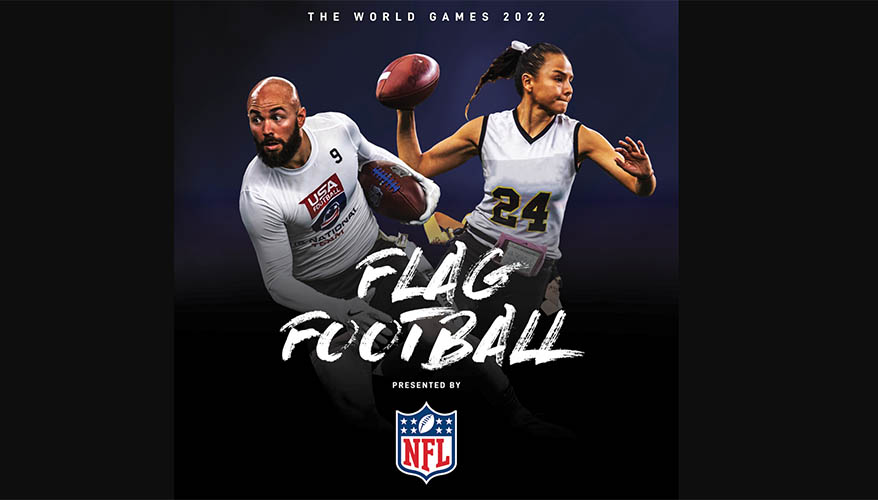 Hosted at Birmingham’s historic Legion Field, Flag Football @TWG2022 Presented by the NFL will feature eight men’s teams and eight women’s teams from around the world. As the current reigning world champions, the United States men’s and women’s teams both pre-qualify for The World Games 2022. The remaining teams will be selected through the IFAF qualifying process.

“We are grateful that the NFL recognizes the significance that The World Games 2022 will have as the first major international sporting event in the United States coming out of this global pandemic,” said Nick Sellers, CEO of The World Games 2022. “The world is longing to reconnect, and Birmingham, AL will play a pivotal role in that reconnection. The NFL’s partnership sends a signal to every company in the world that associating their brand with this special event is important for the world to see.”

As a Premier Partner of The World Games 2022, the NFL will serve as the presenting sponsor of flag football and will promote The Games across its international platforms over the next two years.

“Being a part of the sports program in The World Games 2022 formalizes flag football as an international sport, which promotes the values and benefits of the game to fans around the world,” said Troy Vincent, NFL executive vice president of Football Operations. “Flag football affords men and women, boys and girls, of all ages, body type, and athletic skill the opportunity to enjoy the values, fun and competitive environment that only football offers.”

“The addition of flag football to the World Games brings tremendous global value as the NFL looks to expand the NFL FLAG brand worldwide,” said Izell Reese, executive director of NFL FLAG. “With support from NFL Global Ambassador and NFL FLAG Chairman Russell Wilson, we’ve committed to creating more opportunities for athletes around the world to play flag, and we look forward to teaming up with the City of Birmingham and the World Games Committee to share the NFL FLAG experience with even more athletes and fans.”

NFL FLAG is an NFL licensed property of more than 1,600 locally-operated leagues and over 500,000 youth athletes across all 50 states. Operated by Reigning Champs Experiences (RCX), NFL FLAG has regular participation from more than 3 million youth and adults in the United States.

“We are so excited to bring flag football to the international stage during The World Games 2022 in Birmingham,” said Seattle Seahawks quarterback, Super Bowl champion and NFL FLAG Chairman Russell Wilson. “Flag football expands the sport of football by providing easier access to our game for men and women from all walks of life. With a huge international platform like this, we’ll create opportunities for kids and adults around the world to experience and learn the game of football, while helping grow the sport’s global popularity.”

“We are excited for flag football to join the official lineup of The World Games in 2022, a competitive stage for football players from around the globe to showcase their skills,” said Damani Leech, NFL Chief Operating Officer of International.  “The NFL is committed to opportunities for athletes from around the world to participate in all levels of football and has been supportive of IFAF’s work to bring flag football to The World Games, a great step forward in their long-term Olympic pursuits. We will be closely following the qualifying events which determine the top men’s and women’s flag football teams to compete in Birmingham.”

In its first appearance as a sport of The World Games, Flag Football @TWG2022 Presented by the NFL joins wheelchair rugby, lacrosse and duathlon as the fourth invitational sport for The World Games 2022. In addition to the official sports selected by the IWGA, Birmingham, as a host city, has the opportunity to select up to five invitational sports to include in its sports program.

“We are delighted to confirm the official collaboration with the IWGA and the Birmingham Organizing Committee for The World Games 2022, where we will see flag football on a global multisport stage for the very first time,” said IFAF President Richard MacLean. “The great thing about flag football is that it appeals to every level in the sport. This dynamic and exciting sport is as accessible to children as it is to adults at a grassroots level and we hope that the elite players taking part at The World Games will be a catalyst for global growth, inspiring a new generation of football participants and talent around the world.”

“Football is a staple of Southern sports and will be a welcome addition to The 2022 World Games lineup,” added Birmingham Mayor Randall Woodfin. “Non-contact sports like flag football are a great way to open up the competition to all skill levels. That type of accessibility and inclusion is what The World Games is all about, providing incredible experiences and lasting memories for participants and spectators to enjoy. Birmingham can’t wait for the world to join us in 2022.”

Birmingham City Council President William Parker added, “Adult flag football is a very competitive and growing sport globally. There’s no better place to showcase The World Games 2022 flag football experience than at Legion Field, ‘The Football Capital of the South.’ This partnership with the NFL is just the beginning of a long-term relationship that the city plans to develop with the league.”

“American football was an invitational sport back at The World Games 2005 and 2017,” said Joachim Gossow, CEO of the IWGA. “Being a great sport deeply rooted in Birmingham, Alabama, the Birmingham Organizing Committee was enthusiastic to host flag football, a dynamic non-contact discipline of American football, at The World Games 2022. When the IFAF and the NFL jointly backed the application to participate in order to promote further and showcase flag football in the United States and worldwide, the IWGA Board followed BOC’s request to add flag football to the sports program in 2022.”