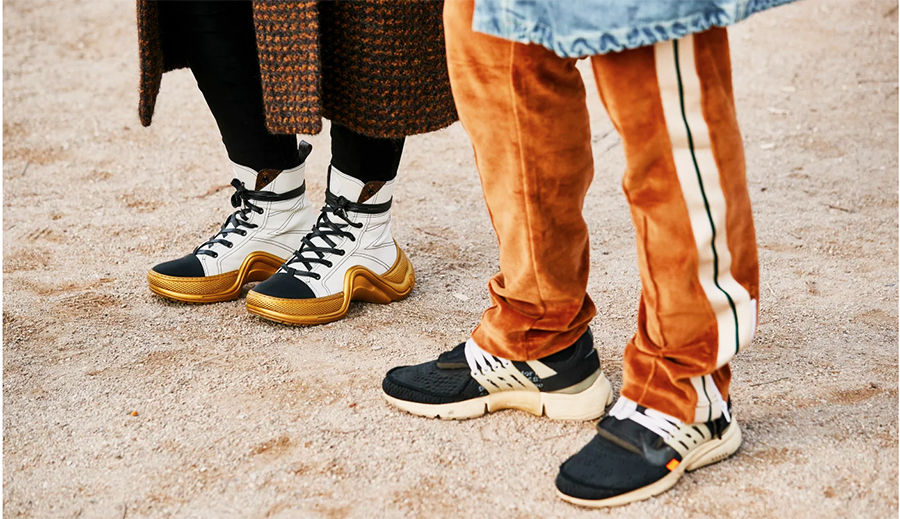 Sneaker culture is alive and well among teenagers, especially males, even as teens’ overall spending has declined amid the coronavirus, which has quickly become one of their top concerns.

That was one of many key takeaways from investment bank Piper Sandler, which published its semi-annual Taking Stock With Teens Survey* this week.

The survey, whose full results can be found by clicking here, was “conducted during a time of significant upheaval as the world (and U.S. teens) grappled with the realities of COVID-19,” said Erinn Murphy, Piper Sandler senior research analyst. “In fact, we believe the majority of our responses came from teens taking the survey from their own homes. Not only was ‘Coronavirus’ listed as the No. 2 social/political concern among teens, but we saw a significant uptick of teens worried about the economy along with a corresponding 13 percent drop in ‘self-reported’ spending versus just last year.”

Male spending on footwear has increased from an average of less than $200/year to $334/year, for a 70 percent increase over the last 15 years, according to the survey.

Crocs made a nice jump, moving up to No. 12 spot—its highest springtime reading ever— from No. 19 a year ago.

The losers in the spring survey included Under Armour, which fell out of the Top 10 to No. 14. The struggling brand ranked No. 9 last fall and No. 12 last spring. Sperry (owned by Wolverine Worldwide) dropped to No. 15 from No. 11 last year.

Looking more broadly at how active-lifestyle brands performed in the teen survey, Nike ranked first among Top Clothing Brands, while Adidas was third. Nike also ranked second among Top Shopping Websites behind only Amazon. Lululemon tied for fourth in that category.

“As it relates to brand preferences, we continue to see casualization of fashion march higher—Nike gained share as the No. 1 brand and Lululemon hit a new survey high as the No. 6 preferred brand,” Murphy said.

Lululemon — “Lululemon moved up again within the Top 10 preferred apparel brands to No. 6 (a new peak) versus No. 8 last year. Among all females, it was No. 4, and among all males, it was No. 15. Looking at upper-income females, it was the No. 2 apparel brand (versus No. 5 last year) at a substantial 10 percent share—40 bps away from No. 1 American Eagle; among upper-income males, it ranked No. 7. As an athletic brand, LULU ranked No. 2 after Nike for all upper-income teens at 19 percent share, a 400 bps Y/Y gain. It ranked in the Top 5 websites for the first time.”

Nike — “As a preferred footwear brand, 47 percent of teens named Nike as their No. 1 brand—this is up 600 bps in share versus Spring 2019. It saw the largest incremental share gain among females. We saw male teens indicate spending gains for footwear sequentially and Y/Y—the only place in the wallet that didn’t see declines this Spring. As a preferred apparel brand, it held 25 percent share versus 22 percent last year; while both genders gained in share, the larger incremental gains were among males. Nike is the No. 2 preferred website (after AMZN).”

Crocs — “Recall seasonality plays a big role in our survey results—Crocs typically ranks highest in Fall periods (following the summer season as teens go back to school) and lowest in Spring periods (following the winter season). This Spring, Crocs ranked the highest we’ve seen it in our Spring survey history at No. 12. This compares to No. 19 in Spring 2019, No. 17 in Spring 2018 and No. 38 in Spring 2017. We note, however, this is not as high as the No. 7 ranking in Fall 2019. It saw balanced rankings across all gender and both income data sets. Post Malone, a recent collaborator with the brand, was named as the No. 6 favorite celebrity—a strong increase versus a No. 14 ranking last Fall.”

Key Top 10 Lists Related To The Active Lifestyle Space In The Survey Are:

* The Piper Sandler Taking Stock With Teens Survey is a semi-annual research project that gathers input from 5,200 teens with an average age of 16.2 years. Discretionary spending patterns, fashion trends, technology, and brand and media preferences are assessed through surveying a geographically diverse subset of high schools across the U.S. Since the project began in 2001, Piper Sandler has surveyed more than 185,000 teens and collected over 46.2 million data points on teen spending.