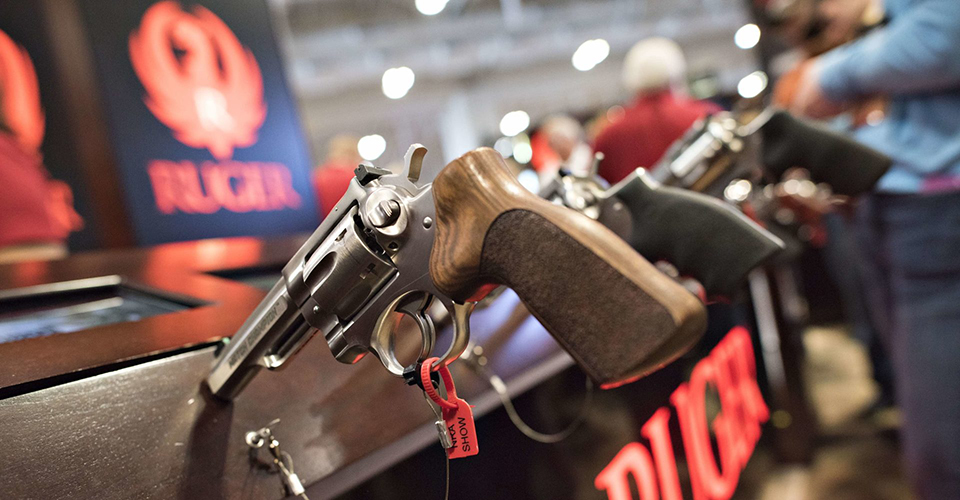 Sturm, Ruger & Company Inc. reported another quarter of double-digit declines with so signs of a pickup in the firearms market while yet again facing a number of gun-control activists at its annual meeting.

One activist speaking in the Q&A session at the meeting was from Catholic Health Initiatives, which spearheaded a shareholder resolution in 2018 for Ruger to produce a report on the risks related to gun violence. About two-thirds of votes were cast for the measure. Ruger released a document in early February that outlined safety features, improved background checks and other steps Ruger has taken related to gun violence.

On Wednesday, Colleen Scanlon, representing Catholic Health Initiatives, noted that while Ruger’s gun-safety report was completed, “the report still left us with concerns.”

One was Ruger’s stance that it’s not feasible to improve internal tracking systems to learn when its weapons might be associated with violent events. Scanlon said, “Shareholders believe the company has both a business and a moral obligation to overcome perceived challenges and work with both law enforcement and its distributors to close gaps and help prevent its products from getting into the wrong hands and causing harm.”

A second issue was Ruger’s unwillingness to invest in “smart gun” technology on the belief that it’s not worth pursuing. She said, “We read that several companies are working to bring safe guns to market in the near term. We find management’s position dangerously shortsighted. It ignores a significant business opportunity, as well as one of the most promising prospects for reducing gun violence.”

Finally, Scanlon said “perhaps what’s most disturbing” is Ruger’s resistance “to engage with its shareholders to discuss these concerns, in an effort to find a responsible path forward.” She called the unwillingness “unreasonable and counterproductive” to the interest of Ruger, shareholders and overall society. Scanlon concluded, “We still believe that Sturm, Ruger can contribute to solutions that will address the plague of gun violence. The potential victims of gun violence, their future, as well as the future of Sturm, Ruger depends on it, and we hope you’ll reconsider that policy and talk with your shareholders.”

A second activist shareholder, Laura Krausert, representing Adrian Dominican Sisters, said her group has concerns that the company still does not recognize the reputational and financial risks associated with gun violence.

Krausert said, “We understand that you believe that you are worried about alienating your customer base if you succumb to actions that can be perceived to be politically motivated, but we disagree. The risks posed by escalating gun violence are increasingly damaging in our opinion to both reputation and financial viability.”

Krausert noted that since the mass shooting at Marjory Stoneman Douglas High School in Parkland, FL in February 2018, 26 states and the District of Columbia have passed 67 laws to prevent further gun violence. The U.S. House also recently passed two notable background check laws this year, the first such legislation on the issue in over two decades.

Krausert added, “So, we believe the tides are turning, and we think it might be shortsighted to believe that this groundswell will not ultimately reach the company and call upon you for contributing to solutions. “

Krausert also said that while her group believes Ruger’s aversion to taking further steps in stemming gun violence is because the company doesn’t want to offend its core customers, gun owners are also looking for leadership on the issue.

“A gun manufacturer willing to step out as a leader in gun safety and gun violence prevention efforts is long overdue,” said Krausert. “We believe the tide is turning, even amongst gun owners, and we welcome solutions to the epidemic of gun violence throughout the country. This is an opportunity for Sturm, Ruger to lead into a future where sensible solutions to preventing violence can peacefully coexist with Second Amendment Rights. And we ask that you will consider this.”

Christopher Killoy, Ruger’s president and CEO, presented an update on the company as part of the annual meeting and part of his presentation called out the leadership the company has long taken on gun safety.

Killoy noted that in 1955, only a few years after the company was founded, Ruger pioneered the practice of running full-page safety ads in the most popular firearms magazines.

In 1987, Ruger pioneered the practice of shipping pistols with a gun lock with no legal obligation to do so and has since expanded the program. Since 1988, Ruger has shipped more than 19 million gun locks to consumers.

Ruger has also long supported Project ChildSafe, which he said is the largest and most comprehensive firearm safety education program in the U.S. Since it started in 1999, Project ChildSafe has distributed more than 37 million free firearm safety kits that include safe gun handling information and a cable gun lock. Together, Ruger and the NFSF have distributed more than 55 million locks to firearms owners.

Most recently, Killoy noted that the company spent considerable time on the gun-violence risks report. He told shareholders the report highlights many of the safety-related patents Ruger has secured over the years but not “dozens” of other patents the company has obtained.

He said, “The long term viability of Ruger and its attractiveness as an investment to shareholders depends mainly on listening to our customers and serving the best interest of consumers who demand safe, rugged, reliable firearms.”

Directly addressing the activist shareholders’ questions, Killoy noted Ruger’s board held its quarterly board meeting the prior day and one item on the agenda was improving shareholder engagement. Some follow-up actions are being taken to the board but greater communication is expected. Said Killoy, “We reached out to several large institutional shareholders in advance of this meeting to discuss their concerns. And likely, we’ll be doing more of that in the future.”

But Killoy said the company remains skeptical about the overall potential market demand for smart guns. He noted that Ruger has a section called “e-mail the CEO” on its website and no interest in smart guns has come in from consumers. Said Killoy, “I get hundreds of questions a week. Usually, it’s related to, ‘I want to see a new caliber and a new gun, a new frame size, a new platform.’ Occasionally, it’s a customer service issue. ‘Why did you do this?’ ‘Why don’t you go this direction?’ I don’t get any of our customers asking for a smart gun. It’s not a question of saying we’re not going to look at that. It’s a question of, we genuinely do not think there is a market for that, in addition to the technology not being ready.”

However, he added, “But remember, we’re a firearms manufacturer. We are making what we consider to be great firearms for our customers.”

“It wasn’t the NRA who boycotted Smith & Wesson,” Killoy said. “It was consumers who boycotted Smith & Wesson. Our consumers at the time almost put the company out of business. Overnight, we lost close to 50 percent of our core business. That was driven by customers and that was before the days of the Internet where things like boycotts and bans take hold overnight.”

As such, Killoy said the company remains “very skeptical” about the activist’s concerns over its reputation risks.

Killoy concluded his formal presentation by also underscoring Ruger’s commitment to safe firearms use. He said, “We, and our 1,800 loyal, hardworking employees take great pride in our role as arms makers for responsible citizens. We remain dedicated to developing new products to satisfy the needs of the market and for the safe and responsible use of firearms. We’re proud of our heritage, confident in our commitment to the Second Amendment and excited about our future. As I’ve told our team here at Ruger many times, this is a tough market. But I like our chance is a whole lot better than the competition, and I hope you do too.”