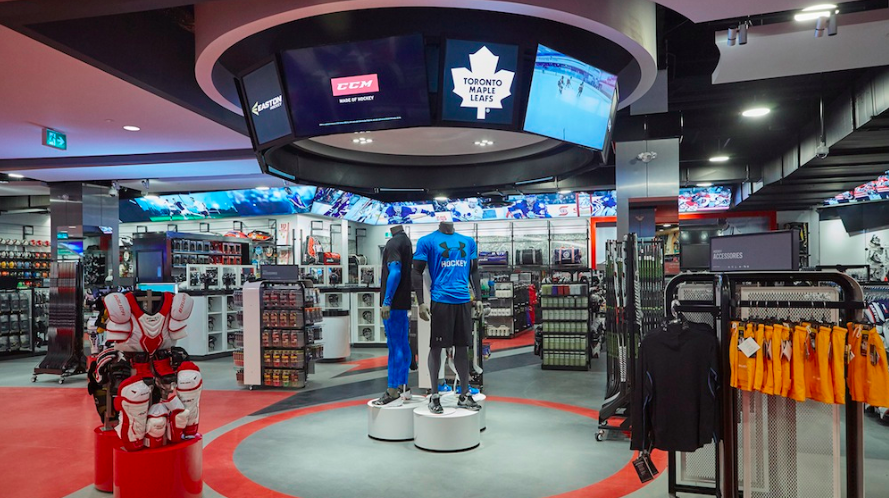 The comp gain came on top of last year’s comp increase of 5.9 percent.

Total retail sales – including sales from both corporate and franchise stores – in the latest quarter grew 1.9 percent.

In a statement, Canadian Tire said the gains in the quarter came despite unseasonable weather in December and were helped by targeted pricing and promotions strategies “in what was a highly promotional and competitive environment.” The SportChek segment saw a lower margin rate due to the pricing and promotion strategies to drive sales and traffic.

Among categories, accessories, outerwear, and athletic apparel were the top performing categories in the quarter and its owned brands penetration increased over the prior year driven by Woods and Helly Hansen. SportChek also benefited from a significant growth in e-commerce sales.

“At Sport Chek, we’re very pleased with the results as the quarter delivered a 2.5 comp in spite of the weather and a highly promotional environment,” said Allan MacDonald, Canadian Tire’s EVP of retail, on a conference call with analysts. “We saw strong results in our owned brands driven by brands like Ripzone, Helly Hansen and Woods. And Woods has been a huge success for us. Its premium outerwear lines went from a $0.5 million in sales in 2017 to over $10 million.”

On July 2, 2018, Canadian Tire acquired Helly Hansen for C$766.3 million with the purchase also including loans from the previous owners and other related items. Last year also saw Sport Chek launch Woods, a rugged winter outerwear line, and Ripzone, which is more of a lifestyle outwear collection.

Added MacDonald, “I’m pleased that our owned brand strategy has now taken root at Sport Chek where we have to compete with some of the greatest brands in the world.”

MacDonald said Canadian Tire’s ambition is to seek out owned brands that “differentiate us” rather than having a goal of expanding in-house brands as a percent of sales. He inferred that differentiation could still come from national brands. He added, “It’s not about the absolute number although there are areas where we think it should be higher. I mean Sport Chek can be a great example of that. By the way, growing owned brands in Sport Chek is no small task. You’re up against some of the best brands in the world there. But it’s really about the brands we’re investing in and ones we’re calling out.”

For the year, the SportChek segment’s same-store sales were up 1.9 percent and retail sales – including sales from both corporate and franchise stores  – grew 2.5 percent. Net revenues were up 0.8 percent to C$1.99 billion.

Canadian Tire estimated that if the acquisition had occurred on the first day of fiscal 2018, Helly Hansen would have contributed $586.9 million of revenue and $30.1 million of net income, before intercompany eliminations, for the year.

On the call, Stephen Wetmore, Canadian Tire’s president and CEO, described Helly Hansen as “an exceptional fit, combining CTC’s capabilities and Helly Hansen’s trusted global brand to create opportunity in Canada and internationally. When we bought Helly Hansen, we knew they had an aggressive plan and a winning team with a track record of delivering results and driving growth.

“2018 performance exceeded our expectations. And looking ahead, Helly Hansen will continue the execution of their plan with strong growth planned in the core U.S. and UK markets and the acceleration of the direct-to-consumer channel. While it’s early days through the integration with the CT banners, we expect revenue growth in Canada to accelerate in 2019 by almost 30 percent.”

Beyond the expansion of owned brands, achievements for the SportChek segment in 2018 included:

Canadian Tire said that in 2019 it will continue to broaden its appeal with new assortments available from Helly Hansen, representing urban and sports-specific clothing for skiers and sailors, an expanded kids assortment, and a wide range of casual and winter footwear. Investments are also planned at SportChek in new tools and technology to improve customer service and store productivity.

At the end of the year, the SportChek segment had 409 stores, down from 411 at the close of 2017. The SportChek banner’s door count remained the same at 194, Sports Experts increased to 105 from 102, Atmosphere’s count declined to 66 from 68, and Other (Pro Hockey Life (PHL), National Sports, Sports Rousseau, Hockey Experts) reached 44 against 47 at the close of 2017.

Companywide, earnings in the quarter were down slightly year over year due to a one-time charge related to a financial services deal with Scotiabank. Earnings reached $254.3 million or $3.99 per share, compared to a profit of $275.7 million or $4.10, a year ago. Normalized earnings, which exclude the $50-million financial services charge, amounted to $4.78 per share, up from $4.10 a year ago, and ahead of analysts’ average expectation of $4.69. Revenue in the quarter totaled $4.13 billion, up from $3.92 billion.

Consolidated comparable-store sales were up 2.2 percent, against a gain of 2.7 percent the prior year and 4.7 percent in 2016.

As it warned earlier in the year, Canadian Tire said it did not achieve its aspiration for  more 3 percent same-store sales growth in 2018 due in part to the unseasonable weather in April and December. The company said it remains committed to plus-3 percent consolidated comparable sales growth on an annual basis. The company also said it is on track to meeting its EPS and ROIC financial aspirations for three years ending 2020.