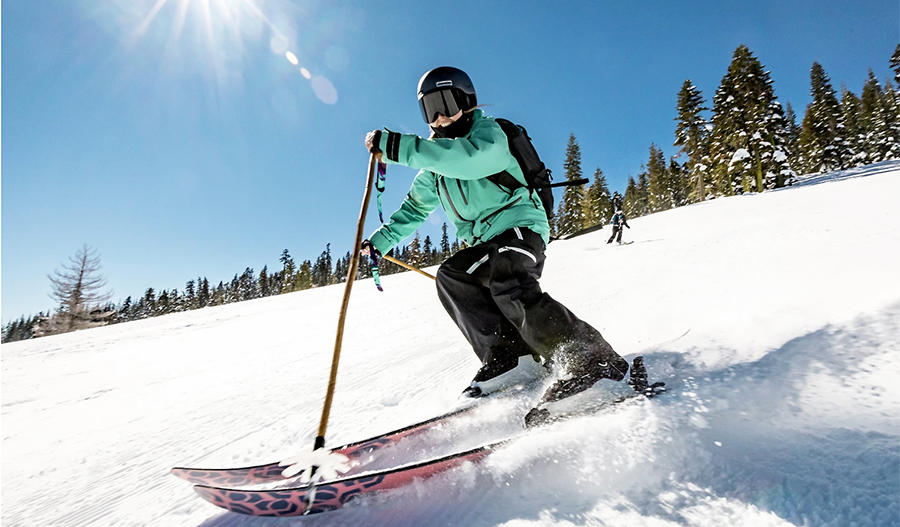 Gordon Geiger is a third-generation co-owner of Geiger’s, the snow sports, outdoor and apparel shop that his family has run in the Cleveland, OH, area for 88 years.

He joined his family business after graduating college in 1979 and now owns the independent retailer with his older brother Chas Geiger, who came aboard a few years earlier.

In the nearly half-century since the siblings have worked at Geiger’s, they haven’t seen anything as devastating to the store’s top and bottom lines as the coronavirus (COVID-19), which has emptied resorts and shuttered snow sports specialty shops across the country, effectively ending the ski season at least a month early.

This unprecedented disruption has wiped out the all-important spring season and should cause more damage in the coming weeks and months.

“In our snow sports business, we’ve certainly been through the highs and lows of snow, climate, recession, 9/11,” Geiger told SGB Executive. “But this is the worst, no doubt. There’s no playbook on this one.”

No More Nest Egg
Geiger views the coronavirus pandemic from two perspectives. Not only is he a shop owner, but he’s also serving a two-year term as president of the National Ski and Snowboard Retailers Association (NSSRA), the national nonprofit that advocates for winter sports retail businesses across the U.S.

NSSRA is one of a handful of organizations working with snow sports specialty retailers on how to navigate what has proved to be a disastrous time. The coronavirus shuttered ski resorts for the season and then shops like theirs just as the busy spring period was kicking off.

Even shops that weren’t forced to go dark by mandate of their state or municipality chose to do so to promote social distancing and help prevent the spread of the coronavirus. So over the last two weeks, stores around the country have relied on their e-commerce channels for clearing out the season’s inventory of hardgoods and softgoods.

But that’s easier said than done for many smaller, independent retail shops.

“Our e-commerce sales year-to-date are about the same as last year,” Geiger said. “It hasn’t grown; it hasn’t gone down. But it’s only 10 percent of our business, so to make up the other 90 percent would be a big wish, and not conceivable.”

The other big hit for ski shops has been the rental business, which is harder to replicate via an online channel and which should have been through the roof amid spring break trips and the crush of riders seeking soft turns on long, sunny days.

Dave Nacke, president and CEO of Golden, CO-based specialty retail buying group Sports Specialists Ltd. (SSL), said the timing of mid-March for the industry-wide shutdown was hugely problematic and could have lasting ramifications as retailers get stuck with winter inventory and now face difficulties in moving it.

“For most specialty retail shops, there was about 20 to 25 percent—depending on where you are in the country—of the ski season remaining, so there’s that much of the selling season also remaining,” he told SGB Executive. “From a price perspective, everything started to go off-price right around Presidents Day weekend. But this 20 to 25 percent is critical to small businesses because of spring break, which it’s the second-highest period for rentals and is a really profitable part of the business. It’s also one of the highest periods for accessory sales, which are the higher-margin items. What it does is allow a lot of specialty shops to build that nest egg to get through the summer months and into the next season.”

A Silent Spring
As retailers’ sales and rental business have ground to a halt, they’ve been forced to offer alternatives for customers to return gear they rented for the season while also quickly transitioning to summer revenue streams, according to Tom Gately, president of the buying group Snowsports Merchandising Corp. (SMC).

“Our stores are all being affected as March is a strong month—especially for the ski area shops,” Gately told SGB Executive. “But now, some have closed, some have reduced hours, some are instituting creative ways to service the customer like curbside drop-off of seasonal leases. Some that are in the bike business are offering curbside drop off for seasonal tunes.”

Matt Gold, the CEO of Lakewood, CO-based Christy Sports Ski and Snowboard, said temporarily closing the chain’s stores, which are in cities and ski resort towns alike, wasn’t a tough decision. It was the right thing to do for employees, customers and the larger community to prevent the spread of the coronavirus.

Still, he admitted, these early, unprecedented companywide closures are a blow for snow sports retailers, most of whom were banking on one last busy month until summer.

“My peers and I in snow sports specialty or shops at the resorts all said, ‘Wow, if we could have just made it through March, then the business picture and the impact on the seasonal aspect of what we do would have been somewhat alleviated,’” Gold told SGB Executive. “But we lost some really important spring break business.”

With March and April such a critical time for these shops—a bridge to get many of them into their summer season—Nacke some shops won’t survive the shutdown, even with their blowout clearance sales and early pivot to summer product lines once they can reopen.

“I’m probably going to lose some people,” he said. “I know of one shop that I’m already losing—he hasn’t made it public yet, but he said, ‘I’ve done this for 45 years in my local community and with the infrequency of the snow with climate change, and now you just throw the fact that I have to close my store because I want to safeguard my employees and myself, that’s the last straw. I’m just done.’”

Also, the online channel is a stopgap, but it doesn’t tap into a specialty shop’s true differentiation: in-person experiences such as equipment tuning and boot fitting, in addition to advice on what skis are best suited for the local terrain or which snowboard boots are the best fit for a particular rider.

“We all live online, but you can’t replicate those services,” Nacke said. “And that’s the unfortunate part because that’s the role of a wide base of specialty ski shops. That’s the service they continue to provide to their customers that online is just not designed to do.”

#CurbYourTurns
The early closure of the season has been difficult across the industry. Ski resorts will lose an estimated $2 billion, according to the National Ski Areas Association. And ski and snowboard suppliers and retailers will post severe revenue declines and implement unfortunate layoffs.

“With our industry down for even a short period of time, the impacts are widespread, especially with smaller suppliers and in our mountain communities that depend on the revenue that would be generated over the next couple of months: at the resorts, but also the small businesses, specialty retail and with the employees whose livelihoods depend on local spending that the resorts drive,” Nick Sargent, president, Snowsports Industries America (SIA), told SGB Executive. “SIA is following all of the federal guidelines and working remotely until the situation improves. As an industry, we are resilient and together, we will get through this. We’re here for our members and will be issuing continued guidance and providing valuable resources to help them manage this tough and uncharted territory.”

SIA, the Park City, UT-based snow sports trade association has provided resources for helping suppliers and retailers, including partnering with Locally. The service “helps guide shoppers to nearby retailers and facilitates order for curbside pick-up and same-day delivery in over 300 cities, both of which have now become the expected norm by consumers.”

“These are two simple ways to help manage shoppers’ needs and expectations,” SIA said. “Despite what we may experience with communities going into lockdown over the next few weeks, adopting retail strategies that help the consumer feel safe and welcome in their local store will be paramount now and in the coming months.”

For some shops, the solitude and openness of the backcountry was a quick fix as many rushed to rent alpine touring (AT) gear for skiers who committed to earning their turns if they couldn’t ride a lift. But while touring typically adheres to strict social distancing, parking lots and uphill tracks quickly became more packed than usual in response to lifts no longer spinning. Soon, backcountry hotspots resembled a crowded gathering more than an isolated activity.

Last week, SIA unveiled a social media campaign, dubbed #CurbYourTurns, in hopes of reducing the number of people flocking to the backcountry.

“As winter outdoor enthusiasts, we love any opportunity to make turns,” SIA wrote in an email promoting the campaign. “Get outside responsibly because now more than ever we need to act sensibly to help slow the spread of COVID-19 and ensure that we are not taking up any bandwidth from our heroic first responders. Flattening the curve has to take priority over everything, even if it’s riding fresh pow.”

‘We Will Get By, We Will Survive’
Even with some safety nets in place, including the recently passed $2 trillion stimulus bill—details of which SGB Executive will soon dissect —Nacke is bracing for some specialty shops to close their doors for good.

“I hope that that doesn’t happen,” he said. “But we have to be realistic that some businesses just don’t have the scale to survive this kind of a setback. I pray that I’m wrong.”

Christy Sports’ Gold said the businesses that have run a tighter ship and have a sound summer business model will be the ones who withstand this inflection point, even if they have to endure some pain points in the interim.

“For many, it will come down to their financial picture, including liquidity—that is going to be a key driver,” he said. “Operators that have their house in better order will be able, in terms of capital, to weather the storm and be able to keep their teams. This is a very people-driven business. Those that have very sound partnerships with vendors can figure out mitigation plans to manage their inventory in healthy ways. Those that do all those things, including us, will come out of this, make it to the other side and be well-positioned for the future.”

Brian DeFouw, head buyer at Confluence Kayak and Ski, in Denver, CO, said the independent ski shop initially stayed open, albeit with shorter hours, when the resorts closed because so many of its customers rely on Confluence’s backcountry gear and expertise.

The shop’s employees were using the increased downtime for spring cleaning, merchandising of the new seasonal gear and getting the shop ready for its transition into paddling and other summer gear. With such a long “to do” list, Confluence was able to give employees the “hours they need to survive” while waiting for the chance to eventually resume normal business operations, DeFouw told SGB Executive.

It speaks to the resiliency of not only that shop in particular, but a proud specialty channel that’s based on a passion for snow sports and the people it serves amid a fierce battle against lost rental revenue, excess inventory, and the prospect of layoffs and extended closures.

Even with no map to navigate the coronavirus, no formal playbook to follow, shops will seek ways to survive, driven by the hope of a better season in 2020/21.

“Only time will tell what will happen,” DeFouw said, “but we are not going anywhere.”