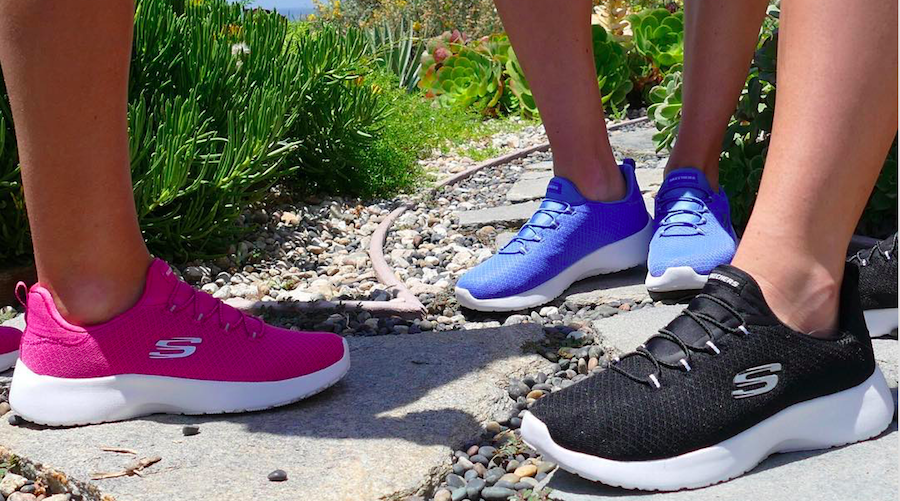 Skechers USA Inc. reported second-quarter sales easily exceeded expectations due to double-digit growth at its own retail stores and internationally as well as solid mid-single growth at domestic wholesale accounts given the challenging climate.

Earnings gains, however, continue to be restrained by costs to support its over-sized international growth. EPS came in short of Wall Street’s targets for quarter ended June 30 and the company provided EPS guidance for the third quarter that was below Street targets.

Shares of Skechers still wound up largely unchanged on Friday –  up 26 cents to $28.57, in trading later in the day – as the company stood out for being one of the few footwear manufacturers managing double-digit growth.

Sales in the second quarter reached a record $1.03 billion, a jump of 16.9 percent. When it reported first-quarter results on April 20, Skechers said it expected to achieve net sales in the range of $950 million to $975 million.

On a conference call with analysts, David Weinberg, EVP, COO and CFO, said the double-digit growth in the quarter was the result of sales increases in all its business segments, including company-owned global retail stores of 28 percent, international wholesale of 18.6 percent, and domestic wholesale of 6.4 percent.

“We’re particularly pleased that the growth came across all three of our distribution channels, especially our domestic wholesale business which was flat in the first quarter,” said Weinberg. “With low double-digit backlogs globally, our planned retail expansion and the development and delivery of our new products, we believe our momentum will continue in the second half of 2017.”

By segment, the 6.4 percent gain in its domestic wholesale business reflected an 11.4 percent increase in pairs shipped while the average price per pair decreased 4.5 percent.

The leading growth categories in the quarter were its men’s and women’s casual, women’s Skechers GOwalk, active, sandals and BOBS from Skechers. Among new products, NEW by Skechers and Skechers Street “sold in strong” while its Energy Light collection for boys and girls “also performed well at wholesale,” said Weinberg. GO GOLF grew mid-double-digits.

“We continue to be the leading walk, work and casual footwear brand and are second for the categories of all footwear and all casual athletic, accomplishments we are proud to have achieved and maintained,” said Weinberg. “While the domestic retail environment remains challenging with the closing of numerous stores in 2016 and through the first half of 2017, we believe our product is unique and will appeal to those seeking comfort, style and value.”

Skechers share in footwear remained flat at 5.9 percent while sales increased in the high low-single digits in the calendar first half through June 2017, according to SSI Data, powered by SportsOneSource. The solid sales growth outpaced the overall footwear business trend in the period in the SSI Data Measured market.

The mid-single digit growth bested the company’s guidance calling for flat to slightly positive sales increases in domestic wholesale. Weinberg said that in part reflected the pull-forward of shipments the last few weeks of June, which the company saw as evidence of strong demand for its product.

“Our July shipments have been strong as well and we remain optimistic and poised to move quickly to fulfill consumer demands and our dedicated wholesale accounts,” said Weinberg. “We’re looking forward to robust sell-throughs for our back-to-school product. And in the third quarter, we are delivering new offerings in our active, casual and sport categories for men, women and new Lighted footwear for the holiday.”

Total international wholesale sales climbed 18.6 percent, or $56.5 million. The gains reflected growth of 19.4 percent or $44.8 million in its subsidiary and joint-venture businesses and 16.1 percent or $11.7 million in its distributor business. Driving the increases was double-digit growth in key markets globally, from the pan- Asia region to South America and Europe to the Middle East.

Skechers’ wholly-owned international subsidiary business grew 5.2 percent due primarily to growth in Germany, Spain, Benelux, Italy, France and Chile. The Alpine region was essentially flat on pairs shipped, but down in dollars due to currency. U.K. was negatively impacted by a bankruptcy.

Joint venture sales surged 62.4 percent for the quarter, led by double-digit gains in China and the addition of sales from South Korea, which is now one of its largest joint ventures, with 53 stores. International distributor sales expanded 16.1 percent in the quarter. Growth came primarily from Australia, Indonesia, Taiwan, Russia and the UAE.

International wholesale comprised 35.1 percent of its total net sales for the quarter while international overall, including retail, made up 45.6 percent.

Gross margins in the quarter improved to 47.6 percent compared to 47.4 percent in the prior-year period.

General and administrative expenses were $305.3 million, up 25.5 percent. As a percent of sales, G&A expenses increased to 29.8 percent from 27.7 percent a year ago. Weinberg said the increase supported both short and long-term global growth initiatives.

“This is evident in both the expansion of our company-owned global retail business, which had the highest net sales dollar on percentage gained, followed by our international wholesale business,” said Weinberg.

He added, “We believe the greatest opportunity for expansion is international and we will continue to invest in our infrastructure and marketing to support this progress.”

Domestic wholesale G&A expenses increased $13.5 million during the quarter, primarily due to increased headcount in the U.S. to support its expansion worldwide as well as its expansion into new categories and brands.

Looking ahead, Weinberg said that with low double-digit increases in backlogs on a worldwide basis as well as a strong July in regards to both shipping and incoming order rates, “we believe we are on track for record sales growth in the back half of 2017,” said Weinberg.

Said Weinberg, “With the investments we have made in our business globally and our strong cash and inventory position as well as new product initiatives we are delivering, we believe we are well-positioned for continued sales growth in the second half of 2017 and into 2018.”

Skechers predicted third-quarter earnings would land in the range of 42 to 47 cents a share, which was down from Wall Street’s consensus estimate of 57 cents a year ago. Sales guidance was pegged between $1.05 billion to $1.075 billion, the upper end of Wall Street’s average target of $1.06 billion. Skechers said its projection includes flat sales in its domestic wholesale business and double-digit increases in both its international wholesale business and global company-owned retail stores.