The past week saw a flurry of numbers hitting the market as OIA and SIA both published retail sales data for the month of January, and SportScanINFO, a service of The SportsOneSource Group, published sales data for February.  While January was marked by falling average selling prices and much higher units sold, February saw sales bounce back and average selling prices increase over the same period last year and the fourth quarter.


SIA is reporting that snow sports sales declined 2.7% in January 2009 compared with January 2008. Retailers reported heavy discounting and lower margins in an effort to attract customers who are quickly becoming accustomed to 70% off sales. These most recent numbers published in the SIA Retail Audit indicate that consumers are still buying items like hats, gloves, and goggles, but they are a bit more hesitant to buy higher price points.
“We lost of lot of business because people are holding off on their ski vacations and are just not buying big ticket items,” Bill Langlands from Darkside Snowboards told SIA.  “They are buying accessories for $30, but they wont spend $500 for a new jacket or new equipment.  One piece of equipment they are buying is reverse camber boards, we should have quadrupled our order on those.”

That note was echoed by others as the technology is seen by many as the most important shift in the snow sports industry this season. It could well re-define the way boards are manufactured, much like the shaped ski did for the industry in the 90s.
The SIA report indicated that retailers are offering deep discounts on equipment. Alpine ski and snowboard equipment sales decreased 5% overall, but were heavily leveraged by sales of carryover equipment, or equipment that was sold at less than wholesale price. Carryover sales accounted for 29% of all alpine skis sold and 24% of all snowboards sold so far this season.  Overall snow sports apparel sales were down 3% in January, but snowboard apparel, shell parkas and fleece sales remained strong.  Accessories sales were up 3% compared to this time last season.  Hats, goggles, gloves, and wax led the market.
The Specialty channel saw the steepest declines in sales in January with a 5% decline.  Chain store equipment sales continued to decline in January, with a total decrease of 18%, while apparel sales decreased 2%.  Sales of accessories in chain stores increased 2%. Internet/catalog sales saw continued growth in January, increasing by 13%.
Outdoor Industry Association also released its Outdoor Topline Report last week, reviewing industry sales for the month of January. According to the OIA numbers, the new year has started out on a “mixed note” in terms of core outdoor sales. Retail sales for Chain, Internet and Specialty outdoor stores increased 3.7% from $350.1 million to $363.2 million.

The Internet channel alone saw a 35% increase in sales, while Specialty stores sales declined 2% and Chain stores sales fell 8%.
The popular “recession sales” that many retailers held in January had a notable impact on numbers and profitability  as retail prices dropped across the board in January and units sold shot up. Retailers were trying to finish the fiscal year with lean inventories and aged or discontinued merchandise sales leapt to record amounts in January.
Packs, climbing gear, winter equipment, hiking and winter boots, trail running shoes and multisport shoes all saw growth in Specialty stores the first month of 2009, as did accessories.
In Chain stores, sales were also driven by bargains. The entire channel was up 5% in unit sales, but fell 8% in dollars as plunging retail prices ate away gains from increased volume. Nearly every product category saw retail prices slip significantly from January 2008. Carryover product sales reportedly soared in almost every category, moving from 2% of all Chain dollar sales last January to 7% in January and contributing to the overall decline in retail prices. The equipment accessory category was the only major product category to gain dollar sales in January, inching up 1%.
The category that fared the best from all three outdoor store channels was paddlesports, growing 7% in dollars in January. Both Specialty stores (+6%) and Internet (+46%) sales felt a boost this year as Chain stores fell 14%. Unfortunately, January typically makes up a small fraction of the years paddlesports sales.
According to data collected by SportScanINFO, the outdoor market is seeing some strong categories as the new retail fiscal year kicks off – and some that have been clearly impacted by the economic downturn. The data is painting a very different picture than the previous month.
The SSI data reveals that outdoor apparel showed respectable sales gains for the month of February. Much of the growth was driven by gains in average selling prices, which were up considerably compared to February of last year, due in large part to continued outerwear sales. Outdoor outerwear saw a February with decent growth, likely due to colder weather, rain and snow in many of the major metro areas in the Northeast. While jackets and parkas showed double-digit increases, rainwear was by far the strongest category for the month.

Most performance-oriented outerwear lagged behind and remained flat for the month. The sole exception was performance wind shirts and jackets, which saw strong double-digit increases. The business was also driven by increases in womens outdoor/adventure apparel, notably shorts, dresses, skirts and skorts, as well as outdoor/adventure travel apparel for both men and women. Short sleeve base layer tops were also strong for the month.
While an improvement from Q4, the February numbers werent getting the market back to normal.
“It [February] looks a little better than the Q4 of 08 We were able to have a nominal sales increase, but the margin is flat to last year. Its definitely not healthy,” said Backcountry.com CMO Dustin Robertson. “Were cleaning out our winter goods now and spring, which we hope to be a full-margin season, is just ramping up. Well see in March and April if the market is going to be able to handle full-margin sales.”

There are some clear shifts in the share of the top 10 outdoor apparel brands. Consumers are clearly looking for value-oriented products from well-known brand names.
“We are seeing some real nice interest in sales if the buy is good [and] very attractive. Value-oriented gear and clothing is going very well,” said Joe Royer, co-owner of Outdoors Inc., based in Memphis, TN. “The buyer has never been more important because the colors and the styles that are right on the spot are selling well We are buying some styles a little down-market just slightly in clothing.”
“Consumers are coming into stores looking for a very specific look and price,” Royer remarked, “and if the product is a bit off from their intended purchase, they wont buy it. Therefore, buyers need to be extremely attentive to current trends and arm themselves with as much information as possible.”
While many brick and mortar retailers are shifting their apparel buy to include more entry level price-points, Backcountry.coms Robertson said that they are not. “We havent changed the product mix at all No matter what, were staying high-end,” he said.
The SSI data revealed that sales of outdoor equipment showed mixed results in February. The largest category, backpacking equipment, saw relatively flat sales in February with a slight up-tick in average selling prices. Backpacking tent sales were up in the double-digits while sales of family tents remained relatively flat and sleeping bag sales were up in the mid-single-digits.
Royer said his companys sales were a mixed bag early on in the year, but he is seeing a “really strong” high-end market in hardgoods, reinforcing the up-tick in average selling prices recorded by SportScanINFO. “Were seeing at our stores [an interest in] value but were also selling high-end kayaks and high-end bicycles that sell for $4,000 or higher.”
Technical packs and bags saw a slow month in February, with a low-single-digits decline in sales. This was driven primarily by declines in technical day pack sales. Internal frame pack sales were actually up in the low-single-digits in February. Lifestyle packs and bag sales were also down for the month. Both categories saw double-digit increases in average selling prices.
Travel bag and pack sales were also down for the month with a smaller increase in average selling prices.
Hydration saw mid-single-digits growth for the month, led by big increases in waist pack/bottle combos and hydration accessories. Sales of hydration systems were down for the month.
Paddlesports were particularly strong in February with double-digit sales increases. These gains were primarily driven by strong kayak sales, but canoes saw high-single-digit increases, as well.
Sales of outdoor footwear lagged in February with double-digit declines overall. There is a clear shift in consumer buying patterns towards purchasing footwear online and the channel reported strong double-digits growth in outdoor specialty products.
As for footwear, Royers comments reflect the data compiled by SportScanINFO. “Our footwear has been a little soft, but were following the buy real close,” he said.  “We worked with a key vendor and they allowed us to send some styles back and replace them with other styles. Wed bought colors that didnt work, but the shoe was good.”
The SSI data saw only two categories of outdoor footwear with growth for the month: approach/multisport footwear and outdoor casual footwear. Technical hiking, light hiking and hybrid/water footwear all declined.  In trail running, performance trail running footwear showed strong double-digit increases for the month, while fashion/value trail running showed heavy declines.
Looking ahead, most retailers polled by The BOSS Report commented that they are remaining cautious.
Greg Caracciolo, general manager of Northern Lights in Bozeman, MT, said the company is remaining “cautious” and trying to remain even to last years numbers. However, he feels that Northern Lights was more impacted by weather in February than by the economy.
Royer said he believes companies would be most successful if they stick to their core values instead of floundering between popular trends. “If you have a real core authenticity to your business and [are] very professional, then I feel really good about this spring, this summer and the future I feel optimistic, overall, about the business, [but] it was a little scary there around Christmas.” 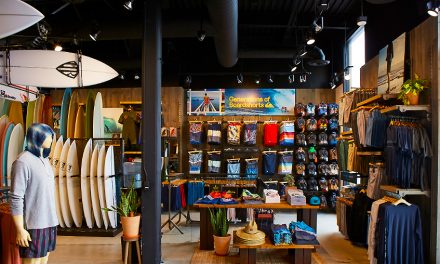