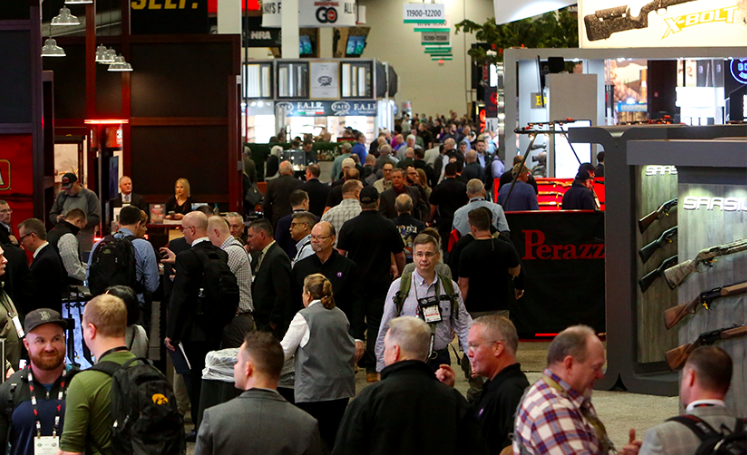 The 41st SHOT Show saw a record number of exhibitors amid signs in recent quarters that the firearms industry may finally be stabilizing. But the industry remains only cautiously optimistic that growth can resume in 2019 with political battles likely to intensify heading into the 2020 presidential election.

In his State of the Industry address at the show, Steve Sanetti, CEO of the National Shooting Sports Foundation (NSSF), said the firearms industry may be facing “the most serious challenges our industry has ever faced,” and definitely the biggest in the 41 years he’s been in the industry

“Unfortunately no longer do we face dispassionate debate on the various forms of proposed gun control regulation for their actual effectiveness in reducing violent crime, which is something that we all want,” said Sanetti. “We now face an onslaught of name calling, virtue signally and identity politics where those who differ with us don’t just disagree with us, they despise us for reasons sometimes understandably misguided but often fueled by just plain blind rage.”

He called on the industry’s participants to “counter the raw emotion and anger with the facts” and also tout the industry’s positive messages, including the 100 million law-abiding firearms owners and the industry’s extensive efforts to stem gun violence.

“We are resolved to not let our many good works go unnoticed or be wrongly credited to others, and we will not be defined by others,” Sanetti said.

The gun industry as a whole has suffered plunging sales and profits under the Trump administration, because consumers are no longer driven by fears of more restrictive gun control with a Republican in the White House who’s been endorsed by the National Rifle Association (NRA). During the years under the Obama administration, the industry had seen a boon in sales, often trigged by legislative talk of tightening gun laws following a mass shooting.

Gun sales even spiked in the months before the 2016 election with many expecting Hillary Clinton to win.

Some Wall Street analysts who attended the SHOT Show pointed to some signs of optimism in talks with attendees with some publicly-held gun manufacturers seeing a healthier sales trends, but uncertainty was also heard amid the political headwinds.

“The tone at this year’s SHOT Show was notably mixed, with trends continuing to bounce along the bottom and some participants hoping for potential improvement amidst potentially heated gun control rhetoric heading into the 2020 Election,” wrote Dave King at Roth Capital Partners in a note. “Vista Outdoor noted a typical benefit heading into similar elections, while American Outdoor indicated somewhat mixed trends on that front.”

In a separate note, Michael Kawamoto at D.A. Davidson wrote that the firearms industry appears “a little more cautious” based on his team’s conversations at the SHOT Show. But the felt the industry’s players are still optimistic that 2019 can show improvement over the sluggish conditions seen in 2018.

“Due to a tougher than expected environment over the past couple of years, as evidenced by the NICS data, industry participants were modestly more cautious on their outlook for next year,” wrote Kawamoto. “With that being said, several key participants have given more positive commentary and shown improved results in recent quarters.”

Kawamoto noted while the December NICS data had not come out yet by the time his report was distributed on January 25th, D.A. Davidson wasn’t expecting any bounce back in the month as the firearms category anniversaries the Remington bankruptcy and some of the promotional activity that occurred following the merger of Bass Pro and Cabela’s.

Wrote Kawamoto, “The first part of 2019 may be volatile as we anniversary the Parkland shooting, but trends should improve throughout the year. We continue to believe that well-positioned companies that offer a point of differentiation will continue to outperform the industry.”

December’s NICS data arrived on December 28 and showed no signs of improvement. FBI background checks for firearms fell 7.8 percent for the month on an NSSF-adjusted basis. The checks are seen as key signal of demand for guns.

Other factors not completely political have played a role in the challenges facing the firearms industry.

Gander Mountain filed for bankruptcy in March 2017 and closed all 152 of its stores. Camping World acquired the leases and has so far re-opened 60 of the locations as Gander Outdoors with less of a focus on hunting. Many Gander locations are now supporting RV sales as well.

Bass Pro completed its acquisition of Cabela’s in September 2017 and that led to some heightened promotions in the marketplace as the merged giant cut back on purchases. Bass Pro last year began converting and opening some stores that adds a Tracker Boats boat center and expanded fishing and apparel departments to reflect Cabela’s expertise.

A politically-driven disruption facing the industry last year was the bankruptcy filing on March, 26 of Remington Outdoors. The legendary gun maker emerged by May 17 with a plan that converted over $775 million in debt into equity. Remington’s trip to bankruptcy court was partly due to performance as sales were down 27 percent in the first nine months of 2017, resulting in a $28 million operating loss.

But its heavy debt was partly because Cerberus Capital Management LP, Remington’s previous owner, had borrowed heavily by buyout investors who wanted Remington divested from their portfolio. The calls came after Remington’s Bushmaster rifle was used in a school shooting in 2012 in Sandy Hook, Connecticut, in which 20 children died.

Brian Rafn, a gun industry analyst with Morgan-Dempsey Capital Management, LLC, in a note last year wrote that he believes the “Trump Slump,” as some are calling the softening in firearms sales, is more of a market correction.

He pointed out that the surge of gun sales during Barack Obama’s presidency was bound to “come back down to earth.”

“From 1945 to about 9/11 (2001), the gun industry was a 3-million-to-6-million-unit-per-year business in the United States,” Rafn wrote in a note published around the time of Remington’s bankruptcy. “We went from a 3-million-to-6-million-unit-per-year business to 16, 17, 18 million units per year. It was triple the post-World War II high. We have an absolute motherlode of guns. … You’re seeing some rationalization in supply.”

Despite the challenges facing the firearms sector, the SHOT Show remains by all indications a vital trade show and is even facing capacity constraints inside the Sands Expo and Convention Center.

Speaking to the Las Vegas Review Journal, Chris Dolnack, SVP and chief marketing officer for the NSSF, which owns and operates the show, said prior to the show that he expected attendance would be slightly down from the 60,000 visitors in 2018 due to the industry’s slowdown. The show has also tightened requirements to hone in on buyers or sellers.

The NSSF later came out with a release that indicated that it saw more than 58,000 industry professionals come to the Sands for the four-day event, from January 22 to 25.

On the positive side, the number of exhibitors exceeded 2,400, a new record. Their booths covered more than 692,000 net square feet of exhibit space.

Dolnack further told the Las Vegas Review Journal that he expects SHOT Show attendance to soar to 80,000 over the next two years as the show expands into the MGM Grand Conference Center in 2020 and Caesars Convention Center in 2021. Attendance has ranged between 60,000 and 68,000 over its ten years at the Sands.

The latest show also attracted approximately 2,400 members of the media.

For exhibitors, a particular recent success has been the Supplier Showcase, which began two years ago and this year more than doubled in size to 540 original equipment manufacturers (OEMs). The two-day event for manufacturers, engineers, purchasing agents and research specialists will move to the MGM Grand next year and expand to four days.

Another newer success was the one-day Pop-Up Preview that this year gave visibility to more than 230 new exhibitors displaying apparel, footwear, camping and other hunting and outdoor gear.

More than 400 companies displayed products in the show’s New Product Center, sponsored by U.S. Concealed Carry Association. In a continuing effort to provide space for companies on the exhibitor waiting list, the NEXT Pavilion gave first-time vendors welcome visibility and potential new customers.

Dolnack also pointed to expanding female attendance at the show as a healthy sign for the industry with the overall increase in women shooters. Women account for 11 percent of SHOT Show attendees, he estimated.

But Sanetti’s State of the Industry presentation at the show underscored the many challenges the industry faces in the years ahead given the political landscape.

He said that industry is too often negatively portrayed in the media and that its many programs that promote safety — such as Project ChildSafe and Operation Secure Store — are not sufficiently acknowledged for helping to stop firearms accidents, thefts and misuse. He also called out the urban and suburban public’s “ignorance of our way of life” and noted how tolerance of difference lifestyles is what unites communities.

Finally, he said while many gun-ownership critics are misinformed, what he believes is irrational fear following mass shooting incidents is also something industry will have to find ways to manage.

“Fear is a powerful emotion,” said Sanetti. “It locks out rational thought and those who would exploit this fear know this all too well. Now, powerful wealthy forces –  combined with a willing and equally complacent media – have dropped all pre-text of objectivity. We now see financial institutions, religious groups and students allied in an all-out attack on firearms and anyone associated with them. Clearly we are now David to their Goliath. It is they who have declared war on us and all that we believe. And they have tremendous resources with which to attain their goals. As an example they spent over $35 million on last year’s midterm elections.”

He added, “So because of all this emotion, this is a struggle in which we have no choice but to prevail and we will prevail because firearms ownership by responsible citizens is enshrined in our constitution and practiced every day by over 100 million firearms owners. They don’t commit crimes. They don’t shoot up our schools. They don’t attack police. They store their gun safely. They follow the law and they matter. But the other side will be spending millions attacking, shaming and intending to restrict the wrong people, further dividing our country at a time when we most need to come together to fight our common enemies: the violent criminal and the forces of hate.”

He said NSSF will be “embarking on an unprecedented effort to get our positive messages out about our industry” over the next few years to ensure the industry can be a “critical part of the solution” while noting that the industry already has many effective programs in place to combat the misuse of firearms.

He concluded, “If America is genuinely serious about doing something that actually works to make America safer, persons of good will need to see through their bias against America’s firearms industry and join us in our real solutions.”

Sanetti’s full presentation is below.