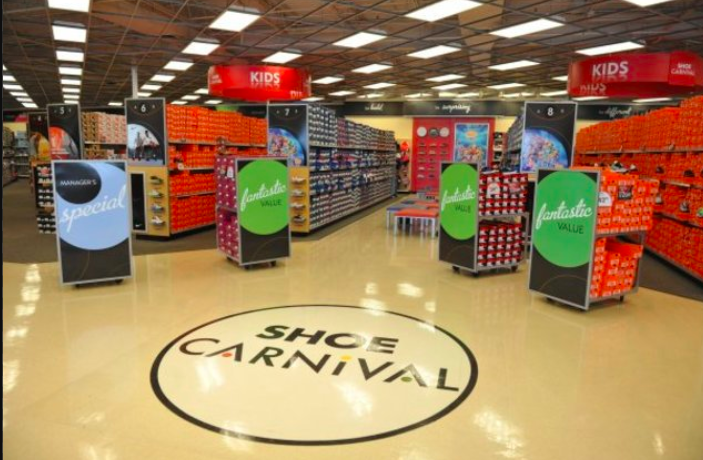 Boosted by ongoing momentum in the athletic and athleisure trend, Shoe Carnival reported better-than-expected third-quarter results and raised its outlook for the year.

On a conference call with analysts, Cliff Sifford, Shoe Carnival’s president and CEO, said traffic was down low single digits, particularly due to the three hurricanes affecting Texas, Florida and Puerto Rico. But a mid-single-digit increase in units per transaction and a low-single-digit increase in conversion boosted overall comps. Each geographic region from the North to the deep South, with the exception of Puerto Rico, all reported positive comparable-store sales increases for the quarter.

The CEO credited his merchant team that ”provided our customer with a great selection of the season’s most important styles.”

By department, women’s nonathletic comped down low single digits. As expected, women’s boots “got off to a slow start” as the chain planned boot receipts later in the quarter. Added Sifford, “We were pleased with our sandal categories as we saw positive results in sport and athletic sandals for back-to-school.”

Men’s non-athletic was up mid single digits on a comparable basis due to broad-based gains across dress, casual and boots. Children’s footwear jumped high single digits, benefiting from “having the right styles from the right brands for our back-to-school time period.”

Adult athletic was up mid single digits, and Sifford again credited on-demand buys by his merchant team in the category. He also noted that the company earlier this year indicated it was shifting more buys from nonathletic to athletic categories “so we could elevate the athletic business to where we thought our customer demand was going to be, and I believe we did exactly the right thing.”

Inventories ended the quarter down 4.3 percent on a per store basis, in line with expectations. The plan remains to end the year with per store inventories down mid single digits.

Gross margins were basically flat at 29.8 percent against 29.9 percent in the same period a year ago. This decrease was driven by an 80 basis point decrease in merchandise margin, partially offset by a 70 basis point decrease in volume distribution occupancy expenses as a percent of sales. The merchandise margin decrease was attributed to the quarter being “more promotional” versus the year-ago quarter and the sale of more athletic footwear, which is typically the lowest-margin category for the quarter, and less women’s boots, typically the highest-margin category in the fall quarter.

SG&A expenses increased $1.2 million to $67.8 million due to incentive compensation, consulting fees related to its CRM initiative and its retirement savings plan, but declined as a percent of sales to 23.6 percent compared to 24.3 percent a year ago due to the sales leverage.

Shoe Carnival will close 16 underperforming stores during the fourth quarter and, as stated on its second-quarter conference call, has identified an additional 30 to 35 that may close in 2018 if their performance doesn’t improve. Said Sifford, “Even though this would reduce our overall sales volume, we would realize long-term improvement in operating income and EPS.”

New store openings for 2018 will be in the low-single-digit range. Added Sifford, “We remain committed to long-term strategic store growth. However, with the changing landscape in brick-and-mortar stores, we believe more attractive real estate opportunities will be available to us if we exercise patience.”

In Puerto Rico, three of its nine stores are open with one more store also working on opening by the end of the year. Some of the remaining five may be closed permanently. The company has impaired seven Puerto Rico stores in the fourth quarter of 2016 due to past underperformance.

Beyond sharp buys, Sifford said Shoe Carnival is benefiting from efforts to enhance the store experience through the addition of shop in shops and other steps. The company also re-platformed its e-commerce site “to enhance performance and reliability,” launched an SMS program to enable customers to hear about new shoe arrivals through texts and shifted its marketing away from traditional media toward a “more robust, always-on digital program.”

Sifford said the company is in the final stages of implementing a CRM strategy that will “leverage customer insights to better engage current and reach new customers.” Over the next year, Shoe Carnival will also enhance its Shoe Perks loyalty program. Online, it’s in the process of creating key brand landing pages on its website and will add vendor drop ship in 2018.

Due to strength in the third quarter and ongoing momentum, Shoe Carnival raised its guidance for the year for EPS to a range of $1.42 to $1.49 from $1.35 to $1.45 previously. Sales are now expected in the range of $1.02 billion to $1.025 billion, up from $1.006 billion to $1.019 billion under its prior guidance. Comparable-store sales are now projected to be flat to up low single digits versus flat to down low single digits.

“We are excited about our exceptional results in the third quarter,” said Sifford. “We believe the positive athletic and athleisure trend happening in the family footwear channel will continue, and we have reallocated inventory dollars to those specific categories for the fall season to take advantage of this trend.”

He noted that as stated on the second-quarter call, Shoe Carnival plans to be less promotional this fourth quarter than last year. To that point, Shoe Carnival decided not to open its stores on Thanksgiving Day. Said Sifford, “Although this strategy will have an impact on sales, we expect to experience higher merchandise margin on the seasonal product. However, as I mentioned earlier, we’ll be closing approximately 16 stores during the quarter, which will impact merchandise margin as we clear through the inventory owned in those stores.”