Russell Brands LLC, formerly Russell Corp., has decided to close its Atlanta offices and shift most of those functions to sister companys Fruit of the Looms campus in Bowling Green, KY. The relocation is a continuation of the integration process since Russell was acquired by Berkshire Hathaway in 2006 and became a division of the FTL subsidiary.

Two years ago, the dealer sales force of Russell Athletic, Spalding and Bike were combined so that each rep sold all three brands. Over the last year, Spalding moved its headquarters from Springfield, MA, to Atlanta. In an exclusive interview with SportsOneSource, Gary Barfield, EVP in charge of Russell Athletic and Spalding, described the latest move from Atlanta to Bowling Green as the “next step” in the ongoing effort to better share resources across Russells brands and FTL.

“What this really does it gives us a position us to grow the business by integrating our corporate strategy, streamlining operations and bringing product innovations to market quickly,” says Barfield. “We feel we can support all our brands and ultimately provide better service to our customers by centralizing operations and getting everybody under one roof.”

Barfield said a “few” jobs may be eliminated in the process as duplicative responsibilities become obvious. But he said the purpose of the relocation was to consolidate forces and eventually make the company more competitive.

“This is really not a downsizing move. In fact, were doing our best to move those talented people in Atlanta to Bowling Green,” says Barfield. “This basically positions those brands for the long term. Hopefully at the end of the day well end up being a more profitable and service-oriented company.”

Regarding business conditions, Barfield admits that “the economy is the economy,” and Russell is seeing mixed results in the environment.

“Our team business is strong and our licensed bookstore business is doing well,” said Barfield. “At retail, its a little more of a struggle on the Russell side.”

Barfield said Russell Athletic is making a concerted effort towards regaining share in the basics side of the business, noting that the brand “was known for sweatshirts and t-shirts and we let that get away from us.” But Russell Athletic also continues to invest on the premium side in its Extreme Compression jerseys in football and Dri-Power collections.  At Spalding, a new iHoop system with iPod capabilities and speakers is being launched at the upcoming NBA All Star game being held in Phoenix.

“Were still doing a lot of innovative and revolutionary things on both brands,” said Barfield. “Given the economy, we feel good about where we are. It could be better but it could be a lot worse.” 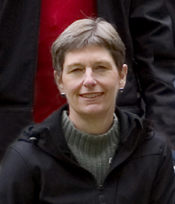