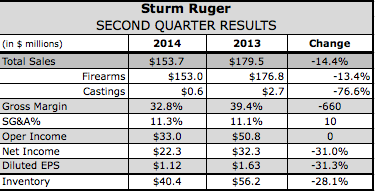 Concerns over tighter regulations for the sale of weapons boosted sales over the last year following a series of tragic shooting incidents, including the Boston Marathon attack in August 2013 and the shootout at the Sandy Hook Elementary School Newtown, CT in December 2012.

“The second quarter of 2013 last year was the high water mark in the company’s history and frankly we are facing tough year-over-year comparisons now,” said Chief Executive Officer Michael Fifer on a conference call with analysts.

The main drivers of the reduced operating margins were the lower sales volume, a product mix shift away from unusually strong sales of higher-margin firearms accessories last year, and increased depreciation expense.

Fifer noted that that in the first half of 2014, a “significant industry-wide reduction in firearms demand” occurred. And while Ruger reported in the first quarter that it was not as adversely affected as the whole industry, the reduction in second-quarter “affected Ruger too.”

Ruger attributed the estimated distributor sell-through decline to the reduction in overall industry demand, aggressive discounting by many competitors “while we maintained our price discipline,” and the absence of recent significant new product introductions from the company.

New products represented $57.1 million or 18 percent of Ruger’s firearm sales in the first half of 2014. Fifer noted that the launch last week of the LC9F striker fire lightweight compact pistol sold well with some sellouts. But despite a ramp up in R&D and capital expenditures to develop new products, “we’ve been experiencing delays and have not met our planned launch schedules,” he said.

He added, “We remained committed to new products. We will not cut costs or work hours for short-term gains or risk jeopardizing our long-term strategy of driving demand through innovation.”

The company plans to invest $40 million in research to develop new product lines this year and has set up a $26 million facility in Mayodan, NC, dedicated to the production of new lines of rifles. The Mayodan facility, which Sturm Ruger announced last year, is its first major expansion in more than 25 years. Production at the plant started during the first quarter.

Ruger also announced it will expand its share buyback program from $25 million to $100 million and declared a dividend of 45 cents a share for the second quarter.

Fifer said the company has been managing production lines to keep inventories and labor costs in line with the weak market conditions. Distributor inventories of the company’s products increased by 120,800 units during the first half of 2014, and “we believe they now approximate a reasonable level to support rapid fulfillment of retailer demand.”