Ross Stores, Inc. reported earnings per share of $1.37 for the first quarter ended May 2, 2015, up from $1.15 in the prior year.  Net earnings grew to $282 million, compared to $244 million for the same period in 2014.  These earnings results include a benefit of about $.04 per share mainly from the favorable timing of packaway-related costs that are expected to reverse in subsequent quarters.  Adjusting for this expense timing, first quarter 2015 earnings per share rose 16 percent over the prior year period.

Sales for the fiscal 2015 first quarter rose 10 percent to $2.938 billion, with comparable store sales up 5 percent over the prior year.

Barbara Rentler, Chief Executive Officer, commented, “We are pleased with our better-than-expected sales and earnings in the first quarter.  Our results continue to benefit from value-focused customers responding favorably to our fresh and exciting assortments of name brand bargains.  Operating margin for the first quarter grew to 15.7 percent, up from 14.6 percent in the prior year, driven by a combination of higher merchandise margin, strong expense controls, and the aforementioned favorable timing of packaway-related costs.”

Rentler continued, “During the first quarter of fiscal 2015, we repurchased 1.7 million shares of common stock for an aggregate price of $176 million.  As planned, we expect to buy back a total of $700 million in common stock during fiscal 2015 under the new two-year $1.4 billion authorization approved by our Board of Directors in February of this year. 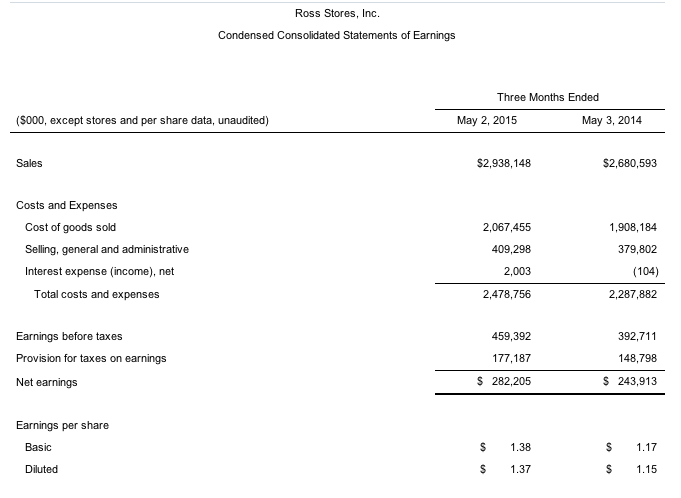