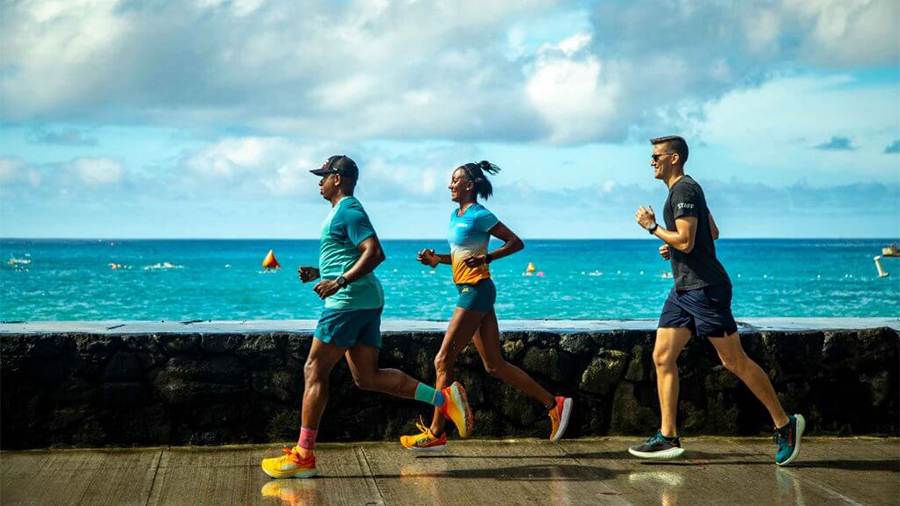 U.S. Athletic Footwear Down 9 Percent
U.S. athletic footwear sales declined 8.7 percent year-over-year from January to June. Units were down 10.6 percent, and the average selling prices (ASP) were up 2.1 percent.

He also noted that 2021 received a boost from government stimulus checks, and comparisons will become easier in the second half of 2022. He also noted that athletic footwear sales were down 2 percent for the third quarter of 2022.

Among genders, women’s faired better in the six months, down 5.8 percent compared to a decline of 9.6 percent for men and 16.0 percent for kids. Powell believes reaching women continues to be the sporting goods industry’s “greatest failure,” with athletic sales in the category about one-third smaller than men’s. Powell said, “My opinion is those businesses should be relatively equal in size. More brands are now making shoes specifically made on a women’s last that will fit them properly. I think that’s going to be a driver to the business.”

Among categories, sports lifestyle, which makes up over half of the revenue in the athletic footwear category, saw a decline of 14 percent in the half. Running, the next largest category, was down 6 percent and work was up 6 percent. Powell said work had remained a “very strong category” during the pandemic and one of the key drivers is more women joining the trades.

Bright spots include walking footwear, which saw a 13 percent gain to build on year-ago gains. Powell believes walking footwear is among the categories benefiting from a renewed interest by many U.S. consumers to get healthier, as many during the pandemic had pre-existing health conditions. Continued interest in social distancing is also believed to be supporting walking as an activity. Said Powell, “Those activities where I can stay fit and stay socially distant are the ones that are going to continue to win.”

Other athletic footwear categories showing revenue gains in the first six months include skate, up 1 percent and soccer/football, up 20 percent.

Average prices for athletic footwear increased for most categories in the first six months of 2022 versus 2021, but the price hikes are generally not as high as those in 2021. Powell said that while the higher prices reflected pricing actions taken by vendors to offset supply chain costs, some moderation in ASP is expected in the fourth quarter as promotions would be necessary to clear elevated inventories in the marketplace. He said NPD’s data showed an increase in promotions in athletic footwear in the second quarter that were not evident in the first quarter.

U.S. Active Apparel Sales Down 5 Percent
U.S. active apparel sales were down 4.9 percent in the first six months of 2022, dropping 9.0 percent in units, offsetting an increase in average selling prices of 4.6 percent.

By category, most top classes in apparel declined year-over-year but remained up double-digits versus 2020.

Within classes, knit shirts, the largest, were down 11 percent in the six months. Pants, driven by sweatpants, were up 4 percent. Shorts were down 12 percent and swimwear was off 14 percent against a strong 2021. Sweatshirts had the most substantial growth during the pandemic in athletic apparel and added 12 percent in the first six months of 2022. Powell said the category, more recently, has shown signs of slowing. Underwear, another strong category during the pandemic, has also started to slow, down 9 percent in the six months.

Powell said there are “far greater inventory issues in activewear” than in footwear, and promotional pressures should drive ASPs down in athletic apparel over the holiday period.

Sports licensing was a bright spot in active apparel, which had a “big jump” in sales over pre-pandemic levels. Powell noted that a newer catalyst to the category’s growth spurt is the expansion of legalized gambling. He said, “If you now can make a bet on a team or a player, you may want to wear their colors just to try to give your bet a little bit more mojo.”

Total sports licensed apparel sales were up 2 percent in the first six months to $912 million, building on a significant recovery in 2021 as canceled leagues and shortened seasons impacted 2020 sales. Sales were $566 million in the first half of 2020. Men’s drove 89 percent of sports licensing’s growth.

In men’s, all leagues and NCAA/college sports licensing apparel experienced a strong comeback in 2021, but some gave back ground in 2022. NFL, the largest property in sports licensing sales, saw sales decline 4 percent in men’s in the first six months. NCAA/college sports licensing sales were up 16 percent in the first six months, with Powell attributing the gains to schools returning to more-normal play schedules. MLB and MLS sales were down 10 percent. Gains continued in the half for NBA licensed apparel, up 18 percent, and NHL, up 25 percent.

Team Sports Equipment Sales Dip 1 Percent
Team sports equipment sales were down 0.9 percent in the first six months. A 9.9 percent decline in units was offset by a 10 percent jump in ASPs. Sales were up 48.6 percent versus the pre-pandemic first half of 2019.

Average retail prices across most classes in the team sports equipment category continued to increase at slower rates than in 2021.

Categories posted mixed results in the 2022 period against the year-ago period. Golf, the largest sub-category in team sports equipment, saw a sales decline of 6 percent in the first six months of 2022. Powell said golf was one of the pandemic’s “shining stars” but is now expected to return to more normalized growth rates.

Among scholastic businesses, many equipment categories benefited this year as sports seasons still faced restrictions in 2021, and many classes were taking place virtually.

Powell said scholastic equipment categories grew slowly in the third quarter and expected them to return to more normalized rates of low-single-digit gains or declines.

One highlight was the 8 percent growth in racquet sports equipment, helped by the expanding popularity of pickleball. Powell said, “Pickleball is sweeping the nation, and sales are up several times versus pre-pandemic levels.”

Promotions picked up in the team equipment space in the second quarter. Powell said the category also faced over-stock issues with inventory arriving late, but the inventory issues are “much worse” in apparel and footwear.

Powell said similar to other categories, health & fitness faced tough comparisons against “absolute record” 2021 sales. However, a challenge with health & fitness is that it’s among the “one and done” categories that tend not to be replenished quickly. Said Powell, “If you bought a treadmill in 2021, you don’t need another treadmill in 2022, and maybe not until 2026 or maybe never.” Powell also said that reopening gyms had reduced the need to buy a treadmill or exercise equipment for home use.

All classes in the health & fitness category saw sales declines in the half, with several declining versus 2020 levels. Among the largest categories, revenue declines year-over-year included a 24 percent drop in weights, 29 percent in treadmills, 48 percent in stationary bikes, and 35 percent in weight benches.

ASPs continue to go up for the most part, but not nearly as dramatically as increases in 2020. Overall, average prices for health & fitness equipment were up 4 percent in the first six months of 2022 against a gain of 24 percent in the same period in 2021.

Outdoor Industry Sales Flat
The outdoor industry category fared best against other active lifestyle categories, showing flat sales in the first six months. Powell said the overall outdoor business did not see a “real peak” in sales last year, and comparisons were easier. Outdoor sales were up 23.7 percent in 2022 at the half versus the same period in 2019.

By channel, outdoor specialty saw a strong recovery, up 7 percent in the first six months of 2022 after facing challenges earlier in the pandemic. Sports specialty e-commerce was up 5 percent, while athletic specialty/sporting goods (AS/SG), the largest channel making up about 70 percent of sales, was down 2 percent.

In outdoor apparel, top subclasses declined versus last year, but most increased versus the same period in 2019. The year-over-year declines included knit shirts, down 6 percent and shorts, down 14 percent. Outerwear, the second largest outdoor apparel category after knit shirts, was up 6 percent but still below 2019 levels as the year had favorable weather.

The strongest growth was in bottles/insulated containers in the outdoor equipment category, up 23 percent. Powell attributed the jump in water bottle sales to consumers returning to work. Powell also said strength had come in the “backyard outdoors” categories, including camp chairs, coolers, grills, and recreational tents, as families were “extending their homes into their yards.”

In outdoor footwear, running, the largest category, was up 5 percent and fashion shoes were up 22 percent. In the outdoor space, fashion shoes are represented by Crocs and Birkenstock. Said Powell, “Some of these fashion, non-performance brands are doing extremely well right now.”

Cycling Sales Are Down 13 Percent
Cycling sales declined 12.9 percent in the six months but remained up 34.5 percent versus 2019 levels. The 12.9 percent decline reflected a 20.2 percent decline in units, partially offset by a 9.4 percent gain in average selling prices.

Electronic bikes were the only category that grew in cycling in the six months, up 11 percent. Among the largest classes, mountain bike sales were down 15 percent, kid’s bikes fell 28 percent and road bike sales dipped 1 percent.

Powell said cycling is among the categories impacted by their “one-and-one” nature, where a purchase one year lessens the likelihood of purchases in ensuing years.

The cycling category also faced “significant” inventory shortages due to supply chain issues. Powell said of the cycling category, “While we have some categories where we’re way overstocked, we are still well below the stock levels that we need to drive the business. So, I think this business will continue to be challenging.”