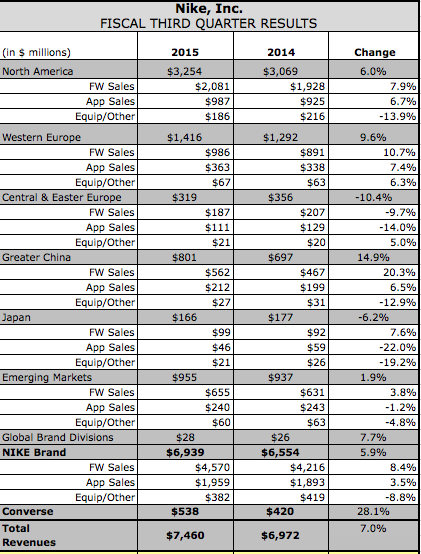 The Nike Brand revenue grew 11 percent on a currency-neutral (c-n) basis, with double-digit growth in Western Europe, Greater China and the emerging markets, as well as strong performances in its sportswear and basketball categories. Revenues grew a solid 6 percent in North America. Nike Brand direct-to-consumer (DTC) revenue increased 29 percent, driven by all concepts in all geographies. Revenues at nike.com ran up 42 percent.

But like many multi-national companies, the strength of the U.S. dollar continued to weigh on Nike’s results overseas, where it generates more than half its revenue. The currency pressures caused sales to come in lower than Wall Street anticipated and also reduced reported outlooks for future orders and earnings into next year.

“While our hedging programs have significantly reduced the impact of FX on profitability, we cannot eliminate all currency risk,” said CFO Don Blair on a conference call with analysts.

Nike also isn’t planning to hike pricing to offset these margin pressures, sticking to its strategy of gradually increasing prices of its products. Blair said, “Just because the euro has gone down dramatically doesn’t mean we’re going to try to get that all back with pricing in Europe.”

On the call, Mark Parker, Nike’s president and CEO, said the company is viewing the challenging operating environment as an opportunity to create further competitive separation.

“Our globally diverse portfolio of geographies, categories, brands, product types and distribution channels gives us a distinct competitive advantage,” said Parker. “By going deep into the business, we are able to see opportunities to serve the consumer and drive growth, despite the choppier landscape.”

Operating expenses were flat to last year as higher investments in digital and sports marketing were largely offset by lower advertising expenses due to changes in the timing of product launches.

Strong responses were see to the LunarTempo, Air Max 2015 and Air Zoom Pegasus 31 in the running category, the Kobe X in basketball, Vapor Untouchable Cleat in American football, and Nike Metcon 1 in men’s training. Extensions to other categories of winning technologies such as Lunar Free, Flyknit, and Nike Air are also supporting the growth. Aeroloft and Dri-FIT is driving growth on the apparel side with Nike Pro particularly supporting its Pro Bra and tight collections for women.

Performance footwear in the running category “isn't performing as well as we would like, particularly in North America,” but running overall continues to see strong results in other key geographies, including Europe, China, and the Emerging Markets.

Edwards added that “running inspired sportswear performed exceedingly well in the quarter, led by strong consumer response to the Roshe platform and the Roshe Flyknit in particular.”

Among regions, North America revenues for the Nike Brand grew 6.0 percent to $3.25 billion, led by basketball and sportswear. EBIT advanced 13.9 percent to $830 million as a result of revenue growth, gross margin expansion, and SG&A leverage. Futures were ahead 15 percent.

Edwards said the growth in North America was still “somewhat slower than expected” as some shipments expected for Q3 delivery were delayed due to the West Coast port slowdown. As a result, Nike expects somewhat higher inventory levels and lower margins in North America for the next few quarters as it rebalances inventory.

Said Edwards, “We expect revenue growth in quarter four to accelerate as the flow of product through the supply chain begins to normalize. However, we do expect it will take a few quarters to return to fully normalized product flow as there are a significant number of containers to be cleared from the ports on the West Coast.”

He still stressed that the company continues to find “tremendous momentum” for the Nike Brand in North America. Partnered-shops such as Fieldhouse inside Dick's SG and House of Hoops with Foot Locker “performed very well” in the quarter. North America’s DTC revenue jumped 15 percent with continued strong growth on Nike.com and comps ahead 7 percent. Said Edwards, “Overall, we continue to see tremendous potential for growth in North America as demand remains strong and our brand continues to resonate with consumers.”

Every key category grew in Western Europe, led by double-digit growth in sportswear, women's training and running. Edwards said growth came across all territories with particular strength in AGS (Austria, Germany and Switzerland), the U.K., and Southern Europe. The region is particularly benefitting from “more differentiated retail executions,” citing the JV omni-channel store at Trafford and the Pro Direct digital store in London as examples. DTC was up 40 percent and strong growth was also seen on Nike.com. Futures were off 14 percent on a reported basis due to currency challenges but ahead 7 percent on a c-n basis.

China’s sales gains were led by double-digit growth in sportswear, basketball, and running. Edwards said China was helped by the benefits of its “reset” strategy that included a “more consumer-focused distribution strategy.” Strong comp growth was seen at its wholesale partners and stores that have been reprofiled are seeing higher profitability. Nike’s own stores in the region found similar success and inventories are in good shape. Said Edwards, “Given the success we've seen in the marketplace over the last several quarters, we are now focused on evolving from a reset strategy to a new normal of how we do business in China. As we look ahead we continue to see tremendous opportunity for growth in this key geography.”

In Emerging Markets, sales for Nike Brand grew 12 percent on a c-n basis to $937 million but were only up 1.9 percent on a reported basis. The gains were driven by strong growth in all territories except Brazil, which grew at a single-digit rate, and Mexico, which declined mid teens. From a category perspective the growth was led by sportswear, running, and basketball. EBIT added 2.6 percent to $234 million, reflecting significant currency headwinds.

Futures were down 6 percent on a c-n basis and 17 percent on a reported basis. Edwards said the futures softness partly reflects tough comparisons to the strong World Cup orders in the prior year. Nike is also taking “proactive steps to reduce the supply to insure a healthy marketplace in Mexico and Brazil, two of our largest territories in the Emerging Markets.”

In Mexico, the inventory issues are largely due transition issues from a new distribution center and inventories are expected to be at more normalized levels by the end of FY15. Brazil’s modest growth in the quarter reflected “volatile macro-economics conditions” but Edwards said the Nike Brand “continues to be incredibly strong in Brazil.” The brand will look to leverage its category offense approach in Brazil as it successfully has in North America, Western Europe and China.

Converse's sales jumped 33 percent on a c-n basis to $538 million and grew 28 percent on a reported basis. The gains were boosted by the acceleration of Q3 shipments in advance of a major systems upgrade. The balance of the growth was driven by continued strength in North America, the conversion of several European markets to direct distribution, and strong growth in DTC. EBIT rose 22.6 percent to $163 million, driven by revenue growth, partially offset by higher investments in infrastructure, DTC, and marketing spending. Said Blair, “We've seen strong momentum in our business year-to-date and we expect that momentum to continue into Q4 and beyond.”

Looking ahead, Nike expects c-n growth in the low double digits in the fourth quarter, with reported revenue growth 8 to 9 points lower, reflecting the significantly stronger dollar, particularly against the euro. For the full year, c-n sales growth is now projected in the low teens, with reported revenue growth expected to come in 4 to 5 points lower.

Q4 gross margin is projected to be flat to up about 25 basis points as the impact of higher close outs, particularly in North America and Europe, largely offset the ongoing benefits of mix shifts to higher margin products and businesses. For the full year, gross margins are expected to expand about 100 basis points.

Looking ahead to FY16, Nike sees continued strong momentum with revenues on a c-n basis expanding in the high single-digit target range. However, the appreciation of the US dollar against nearly every other major currency will reduce next year's reported revenue, gross margin, and profit. Assuming exchange rates remain in about the same range as they are currently, revenue growth is expected to increase in the mid single-digits and EPS growth in the high single- to low double-digit range.