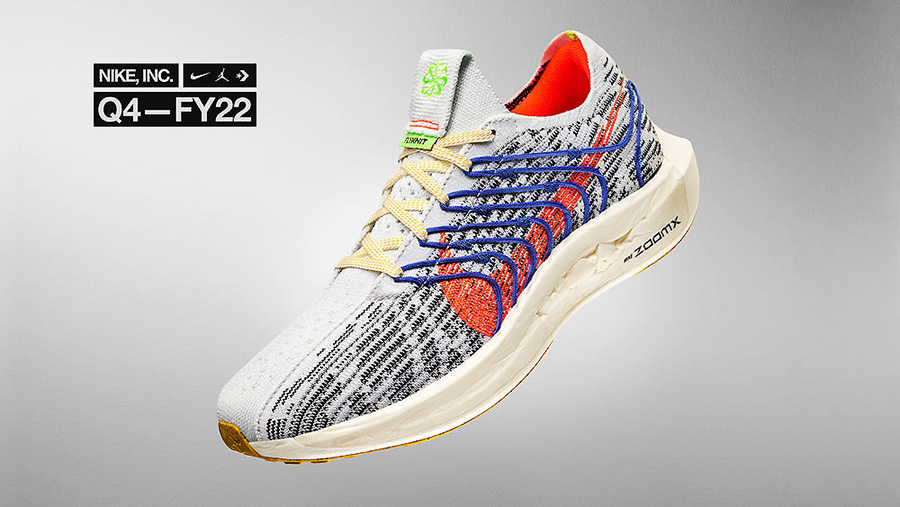 Shares of Nike fell about 7 percent Tuesday toward a two-year low after the company reported earnings for the fiscal fourth quarter that topped Wall Street estimates but warned that surging transport costs and a strong U.S. dollar would eat into profit margins over its coming fiscal year.

“We’re paying about five times the rate that we paid pre-pandemic to put product in a container, on a boat and move it from Asia to the U.S.,” said Matthew Friend, Nike’s CFO, on a call with analysts. “That has a significant impact on our operation.”

Friend said it takes more than 80 days for a full container of Nike footwear and apparel to cross the Pacific from its factories in Asia, about two weeks longer than average. By the end of the quarter, 65 percent of Nike’s total inventory was in transit.

“At the end of the quarter, we did start to see improvement vis-à-vis the boat backlog at West Coast ports,” Friend said. “But at this point, given the variables we see, we’re not planning for a significant improvement in transit times in fiscal 2023.”

For fiscal 2023, Nike forecasted revenues would grow by “low-single- digits” compared to 2022 levels due, in part, to the headwinds of a stronger U.S. dollar, with profit margins falling as much as 50 basis points.

“When we look at our brand strength and momentum, our product pipeline against some of the biggest growth opportunities that we have, we think we’re well-positioned for growth in the fiscal year 2023,” Friend told investors. “Having said that, we did take a cautious approach to Greater China, and we’re doing that because as we look at what disrupted our performance in the fourth quarter and focus on what we can control, we felt strongly that prioritizing a healthy pull marketplace is the right action for us to take given the ongoing risk that we see in that marketplace.”

In the quarter ended May 31, sales were down 0.9 percent to $12.23 billion, just ahead of Wall Street’s consensus estimate of $12.1 billion. Sales grew 3 percent on a currency-neutral basis.

Selling and administrative expenses increased 7.8 percent to $4.0 billion and grew as a percent of sales to 33.0 percent from 30.3 percent.

North America Sales Down 5 Percent
In North America, sales for the Nike Brand were down 5 percent on a reported and currency-neutral basis, to $5.1 billion. Operating income in the region was down 18 percent to $1.48 million, in line with expectations as supply shifts lapped in the previous year. Elevated ocean freight and logistics costs dampened North America’s near-term profitability.

Nike-owned inventory at the quarter’s end grew 30 percent versus the prior year, with extended lead times causing in-transit inventory to be 65 percent of total inventory. Wholesale revenue declined 12 percent due to inventory supply constraints.

“Even with available lean inventory, our power franchises continue to resonate deeply,” said Friend. “Pegasus led the way for performance footwear, Jordan launch delivered a record-breaking quarter, and classics such as Dunk and Blazer drove strong full-price growth. Meanwhile, we continue to test and learn across our newest retail concepts, such as our Nike Live doors, which are increasing member buying among women.”

“Sport continues to power our EMEA marketplace, highlighted by growth in running and fitness, performance franchises such as Metcon and Mercurial and apparel launches such as the elite bra in women’s,” said Friend. “Looking ahead, EMEA will kick off the most unprecedented 12 months of global football in Nike’s history, starting with the Women’s Euro Champs this summer, Men’s World Cup in the fall and women’s World Cup next summer. Nike is meeting the moment with a complete offense, including new kit launches, new training and lifestyle assortments, and a Mercurial, Tiempo and Phantom footwear innovations across men’s, women’s and kids.”

Friend noted that the performance followed the region’s most widespread COVID disruption since 2020, impacting over 100 cities and over 60 percent of Nike’s business.

“Despite a dynamic operating environment, Nike extended its leadership position as Chinese consumers’ No. 1 cool and No. 1 favorite brand,” said Friend. “We saw this translate into a positive business impact on Nike Tmall’s Super Brand Day, which drove 90 percent member demand penetration and nearly 1 billion impressions. Nike also created a clear separation on 6/18 as the undisputed No. 1 store and No. 1 brand on the Tmall sports channel, outperforming the market.

As lockdowns lifted in specific trade zones in late April, May and early June, Nike saw improved store traffic and overall consumer demand. Key footwear franchises continue to win in the marketplace, led by GT Cut as the No. 1 style in performance basketball and Pegasus 39, which drove strong results in men’s and women’s running. Express Lane also drove strong sell-through with local launches such as the Air Force 1 logo and the head-to-toe street dance pack in footwear and apparel.

Said Friend, “We took specific actions in Q4 to recalibrate forward-looking supply and demand, prioritizing the return to a healthy pull market by the end of the second quarter. While there may be a near-term risk of further COVID disruption, longer-term, we continue to be encouraged by another quarter of brand momentum in the marketplace.”

Friend said, “We also saw our biggest quarter yet for women’s, led by performance running, classics and lifestyle apparel. Kids led the way within Nike Digital, up nearly 100 percent from last year. We’re expanding support for a new generation, driving strong results with proven franchises such as the Court Borough plus newer innovations such as Dynamo Go.”

Full-Year Revenues Climb 6 Percent
For its full fiscal year, revenues for Nike, Inc. increased 5 percent to $46.7 billion, up 6 percent on a currency-neutral basis.

Revenues for the Nike Brand were $44.4 billion, up 5 percent on a reported basis and 6 percent on a currency-neutral basis, driven by double-digit growth in Nike Direct, partially offset by slight declines in wholesale revenues.

Revenues for Converse for the year were $2.3 billion, up 6 percent on a reported basis and up 7 percent on a currency-neutral basis, led by double-digit growth in our direct-to-consumer business, partially offset by lower wholesale revenues.

Outlook
Friend said, “We enter the year confident in our brand strength, consumer connection, product pipeline and normalizing inventory supply into a healthy pull market in North America, EMEA and APLA. We continue to see momentum against our largest growth drivers and our most iconic product franchises. At the same time, we closely monitor consumer behavior and the implications of high inflation on near-term economic growth and consumer demand. We are also taking a cautious approach to Greater China given the uncertainty around additional COVID disruptions.”

As a result, fiscal 2023 revenue is projected to grow low-double-digits on a currency-neutral basis, partially offset by foreign exchange headwinds of approximately 400 basis points. In the first quarter, real dollar revenue growth is expected to be flat to slightly up versus the prior year due to COVID disruption in Greater China and more than 500 basis points impact from foreign exchange translation.

Gross margins for the year are projected to be flat to decline by 50 basis points versus the prior year, with a wider-than-usual range reflecting numerous uncertainties. The benefit from mid-single-digit pricing actions and continued gains from its shift to a more direct business is expected to be offset by another 100 basis points headwind from elevated ocean freight costs, increased product costs, discrete supply chain investments, and normalization of historically low markdown rates. A 30-basis-point headwind is expected on the foreign exchange due to strength in the U.S. dollar, offset mainly in fiscal 2023 by favorable hedge rates versus current spot rates.

The SG&A rate for the current fiscal year is projected to increase from high single-digits to low double-digits as investments continue in talent, brands, new stores, and transformational capabilities.