Nike, Inc., while flying a bit higher than most other athletic footwear and apparel brands these days, is still experiencing some of the pain of the current economic downturn.  At the very least, they will find it tougher to anniversary a strong performance in the year-ago periods in the lead up to the Olympic Games in Bejing.  In addition,  it was an acquisition that caused the company to most pain in the quarter as NKE was forced to write down the assets of Umbro, the iconic soccer brand it acquired in early 2008.

While the Umbro issue took a lot of the energy out of fiscal third quarter results, the next couple of quarters will also see charges that will affect the bottom line.
Mr. Parker said that they had taken a “flat plus” approach to expenses and the company had “pushed down hard on headcount, travel and meeting costs and tightened overall SG&A.”  But the company still has its work ahead of it in plans to reduce its global workforce.  NKE expects to complete the restructuring, which could affect as many as 1,400 jobs, by the end of its fiscal fourth quarter.
“We are streamlining and realigning the entire organization on a global scale to target growth and effectively manage expenses at the same time,” said Parker during a conference call with analysts.  “We are making some tough decisions like the planned reduction in staff and moving to consolidate our manufacturing base.”  Blair suggests the reductions will lead to charges in the $175 million to $225 million range over the next several quarters, with the majority of the charges occurring in the fiscal fourth quarter ended May 31.
The first of the moves were made Friday as the company announced that it would reorganize its Nike Brand into a new model consisting of six geographies with reduced management layers and an increased focus on core category business areas, driving greater efficiencies and stronger consumer connections.  One key market analyst suggested to Sports Executive Weekly that the company may have found redundancies when it organized into its six category-focused business groups.
The plan unveiled last week has the Nike brand managed across six new geographies (North America, Western Europe, Eastern/Central Europe, Greater China, Japan and Emerging Markets) instead of its current four regions (U.S., Asia Pacific, Americas and EMEA).  “This new model sharpens our consumer focus and will allow us to make faster decisions, with fewer management layers,” said Charlie Denson, president of the Nike Brand.
Craig Cheek, former VP & GM of U.S. region, will be head of North America.  Brent Scrimshaw, former VP of EMEA Brand Management, will assume the leadership role for Western Europe, while Marc van Pappelendam, former Commercial Director in EMEA, will be head of the Eastern/Central Europe region.  Greater China will be led by Willem Haitink, former GM of China, Jim Godbout, former GM of Japan, will head up Japan, and Jayme Martin, former VP and GM of the Americas region, will head up Emerging Markets.
All regional heads will report directly to Gary DeStefano, president Global Operations. Roland Wolfram, former VP & GM of the Asia Pacific region, will assume the role of Head of Global Sales also reporting to Gary DeStefano.  David Heath, currently the head of global sales, is retiring effective May 1.
Additionally, Eunan McLaughlin, former VP/GM for the Nike EMEA region, will become the new president of the NIKE, Inc. Affiliate portfolio reporting directly to Parker, subject to board approval.  Lee Bird, the former president of the Affiliates for the last three years, has decided to leave the company to pursue other opportunities.
Looking at the financials for the fiscal third quarter ended February 28, Blair reported that revenues declined 2.3% to $4.4 billion, but currency-neutral revenues increased 2% for the period, thanks to the stronger U.S. dollar.
The Nike brand posted a 1.1% increase in footwear sales to $2.48 billion for the quarter, or up 6% on a currency-neutral basis, with revenue gains in the U.S., China, Japan and the U.K. Apparel sales were down 8.5% to $1.13 billion (-4% C-N) after jumping 18.5% in Q3 last year, while equipment sales fell 11.6% to $237 million, compared to a 10.7% increase in Q3 last year.  Charlie Denson, president of Nike brand, said year-to-date revenues are “up in every region and across nearly every category led by revenue and market share gains in running, basketball and sportswear.” 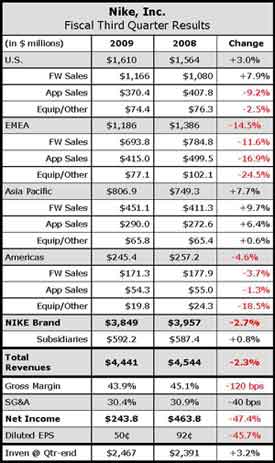 Sales at Nike owned-retail stores in the U.S. grew 2% for Q3, well off the double-digit pace in the prior-year period, as comp store sales at in-line stores fell 28% for the period.  The decline was attributable to lower traffic at the stores. Factory store comps were down 3%.
Looking at the decline in futures, management attributed the lower numbers to comparisons to a prior year that included orders related to the Beijing Olympics and the European Football Championships.  They also admitted they reflect the impact of the difficult consumer environment. Order backlog was down about 2% when measured on a currency-neutral basis.  When asked if some of the decline was do to more retailers moving more business to fill-in and at-once, Nike management suggested that futures are still a leading indicator for their business.
Gross margin for the third quarter declined 120 basis points to 43.9% of sales. Currency hedging apparently delivered benefits in the quarter but that upside was more than offset by higher product costs, discounts and obsolescence reserves. Lower margins in the other businesses also contributed to the gross margin decline.
In the non-Nike affiliates businesses, Converse delivered another big quarter as revenues increased 33%on top of a 29% increase in the year-ago period, thanks in part to the Converse One Star program at Target.  Management said Hurley continues to “outperform the competition and pick up share in a tough action sports market.”  They said Cole Haan and Nike Golf are “feeling the downward turn more acutely as consumers reduce their discretionary spending on luxury products.”
Overall, the subsidiary businesses saw 5% revenue growth on a currency-neutral basis but reported pre-tax income fell 21% for the period.
Looking at Umbro, Parker suggested they were making good progress on the brand, the product and on operations.  He highlighted the launch of Englands redesigned national team kit next week.  “Has the business turned the corner? Not yet,” he said.
Looking ahead, NKE expects currency-neutral revenues for the fourth quarter to be “roughly in line with the prior year.”  The revenue growth expectations reflect comparisons to reported mid-teens revenue growth last year in advance of the Olympics and Euro Championships.   Mr. Blair also sees some challenging comparisons to the double-digit growth delivered in the first half of fiscal 2009, but also stressed the adverse impact of the stronger dollar.  “We expect reported revenues for the first two quarters of fiscal 2010 will most likely be below prior year levels,” he said.

Downlite Expands Down Supply in Europe and Asia