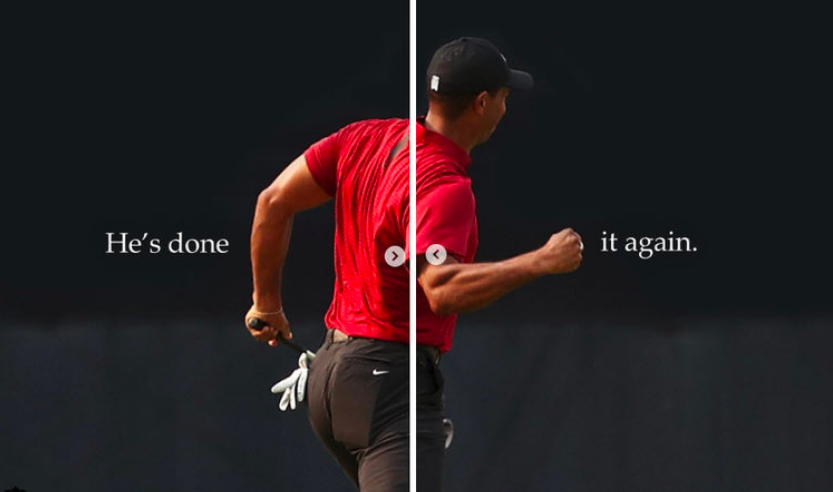 Nike released some clever imagery honoring Tiger Woods and his victory at the recent PGA Tour Championship, his first PGA event win since 2013.

The two-panel Instagram ad plays on the uncertainty of Woods’ comeback. The first panel reads “He’s done…” and the second, “it again” to read “He’s done … it again” across the two sections.

The copy under the photo reads, “Never stop chasing your crazy dreams. #justdoit,” referencing the brand’s campaign honoring the 30th anniversary of the “Just Do It” slogan that stars former NFL quarterback Colin Kaepernick,

Nike has stood by Woods through a number of controversies, including the 2009 sex scandal and DUI charges last year, since signing him when he turned pro in 1996.

Bridgestone Golf, which signed Woods in late 2016 for golf balls, also posted a tribute video on social media after he won.

TaylorMade, which signed on as Wood’s equipment sponsor earlier this year after Nike left the category, also came out with a video honoring Wood’s 80th win with the tagline, #NeverDone.

Woods’ win puts him two away from tying Sam Snead’s record of 82 PGA Tour wins. The win has also reinvigorated speculation that he could break Jack Nicklaus’ record for the most major wins of all time, with 18. Woods hasn’t won a major since 2008.

“Oh, I think its realistic,” Nicklaus told the Golf Channel Sunday night after the win. “With today’s equipment and physically the way the guys take care of themselves, I think they can play well into their 50s. So maybe Tiger has another 40 majors to play. Out of 40 majors, can he win five of them? I don’t know; certainly I think he’s playing well enough. It depends on how much he wants to work at it and how interested he is and how long he wants to make a commitment to do that.”

The 14-time major winner, who has battled numerous injuries in recent years, has seen his ranking jump to 13th in the world with recent better play, a jump of 1,186 spots since December 2017.