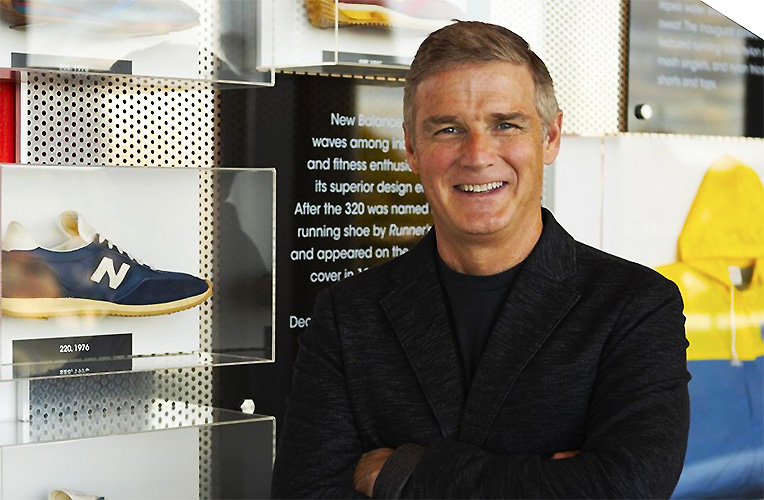 At a webinar hosted by Coresight Research, Joe Preston, CEO, New Balance, said his company’s sales were down 17 percent in 2020 due to fallout from the pandemic. However, he believes steps taken to enhance digital execution and improve speed-to-market capabilities have set the path for significant growth in the years ahead.

“Coming into 2021, we’re a new company,” said Preston, a New Balance veteran who became CEO at the start of 2019. “We’ve changed the way we’ve operate. We’ve introduced agile into the entire organization. We’ve developed 90-day sprints, which have allowed us to put together several building blocks that have accelerated our growth ambitions. Our order book in demand is strong, and we’re bringing on the additional capacity that will be here by mid-year.”

Asked about New Balance’s ambitious $7 billion annual sales goal, Preston said New Balance expects to reach “$7 billion or $10 billion over the next few years.” He added, “We’re working out what those dates are, but we believe that we’re on a growth trajectory that we have never seen before.”

Preston’s predecessor, Rob DeMartini, in August 2018, publicly stated a goal to reach $7 billion in annual sales by 2023. In 2019, New Balance’s sales were about $4 billion, running nearly flat versus the prior two years.

Preston began his conversation by detailing New Balance’s adjustments in recent years to changes in consumer behavior at retail. He noted that well before the pandemic, U.S. retail was faced with challenges caused mainly by an over-stored environment. Online selling accelerated that disruption and also raised consumer’s expectations.

He noted that as a result, further disruption caused by the pandemic led to a record 11,000 store closures in 2020, citing data from CoStar Group. Some retailers were also luckily positioned to perform well, he noted. Preston said, “You had a tale of two cities. You had essential retailers, and you had non-essential retailers.”

On the positive side, the pandemic accelerated New Balance’s capabilities to sell direct-to-consumer through e-commerce and through BOPIS (buy online, pickup in-store) and curbside pickup. He said, “Ultimately, in the end, it’s trying to meet the consumer exactly where they want to be. And in 2020, that was clear that they wanted to purchase online.”

Overall, half of New Balance’s volume in 2020 was sold through digital commerce, which includes New Balance’s own sites, pure-play internet retailers/marketplaces, and its wholesale retail partners’ websites.

Another benefit of the pandemic for New Balance is it forced the company to be more disciplined in its SKU rationalization. Preston said, “In April, when all those stores closed, we were facing a tsunami of product that was on its way to the states with virtually no home. And it was a great wake-up call because we’ve been trying to trim back our styles for a year, and we’ve been making progress, but it allowed us to kind of focus.”

In the future, Preston said the company plans to use predictive analytics and other technologies to optimize SKU assortments. He said, “We believe that there are certainly ways that we can continue to make progress to make sure we have the right product at the right time.”

Another favorable change has been shifting to working remotely and taking advantage of online tools for sales, marketing, product design, and development. Remote access has sped up turnaround times in many areas, including shortening the supply chain and moving quickly on retailers’ orders. Preston said, “In our business, particularly, it’s all about getting in front of retailers. There is an expression, ‘No sample, no sale.’ And this year changed everything.”

Preston talked about the promise of emerging fit technologies to reduce online returns, how the company could quickly pivot to make PPE across its domestic manufacturing factories and its commitment to sustainability.

Internally, the pandemic offered New Balance a lesson in “how connected the world is” with the mental health challenges stemming from the pandemic, further underscoring how “we all need each other.”

He said New Balance has always had high retention rates and is known for its strong culture, but the pandemic highlighted community importance. Preston said, “The importance of listening, communication and empathy is vital…People want to be part of the community. We’re all part of various communities, whether it’s our family and friends, or our churches, schools, etc. And work is one of them. People want to feel like they’re part of something, and that’s something that we try to promote at New Balance.”

Orvis Sees Sales Surge In Fly Fishing And Dog Beds
Finnegan at Orvis discussed how the pandemic has caused a consumer “shift to reconnect in a meaningful way to the outdoors.” He believes people spending significantly more time online indoors are turning to the outdoors “to take a break from digital and their work and all of the news.”

For Orvis, the result has been a resurgence in fly fishing. The spike in the category has not been seen since the movie “A River Runs Through It” in 1992. Finnegan said of the increased demand, “We saw that as a way of people thinking, ‘How can I reconnect?’ ‘How can I add balance into my life that’s meaningful?'”

The other category, “exploding right now,” is anything dog-related as the nation has seen a significant hike in dog ownership. Finnegan said, “You know, now you’re at home, people are getting puppies. Or their office mate is a dog. And so, we saw this movement into that space.”

Orvis, founded in 1856 just after the Lincoln administration, was the inventor of the dog bed, originally called the Dog’s Nest, and offers an expansive range for dogs.

Finnegan said the interest in fly fishing and dogs amid the pandemic runs across demographics, including younger and older generations, and genders and races. An increase in women taking up fly fishing has also been seen.

In apparel, the “comfy cozy story” has been strong, in line with the stay-at-home trend. Tops have been strong with work-from-home needs for video conference calls. Finnegan said, “There was a big move toward comfy casual and people rethinking, ‘How do I want to work and what’s the brand that I want to portray when I’m working.'”

Like New Balance, Orvis reduced its inventories “dramatically” and went after best-sellers aggressively. Shortages in fly fishing have not been material since the retailer was heavily invested in the category.

Supply Chain Agility Becomes Essential Amid Pandemic
Among other speakers, Sarah Clarke at PVH, the parent of Calvin Klein and Tommy Hilfiger and owner of the Nike underwear license, said the synchronization between supply and demand to handle complexities across the supply chain has become even more essential with the pandemic. She also highlighted the increasing importance of ESG (Environmental, Social and Corporate Governance) as factories, vendors and retailers all had to rely on each other to manage the crisis. She said, “The ripples of wins that come from quality, efficiency, better product, happier workers – that to me, has happened.”

Tractor Supply’s Colin Yankee talked about his chain’s efforts to diversify its sourcing strategy and the challenges of attaining container space to support core items requiring long-lead times from Asia. He said the supply chain’s strains were exacerbated by surging demand for many of Tractor Supply’s products. He said, “This is many years in the making. It’s just accelerated because of both demand and also trying to build that supply chain resilience. We’ve tried to design to be purpose-built based upon how inventory behaves.”

He also remarked about the “massive shift” in digital engagement seen during the pandemic. Widespread adoption of online practices that Tractor Supply expected would take two or three years occurred over a few weeks. Yankee stated, “The fluidity with which customers move between engaging online or in-store to find where they are, what they’re trying to do, the product they’re trying to purchase, is amazing.”

When it came to perceptions, 68 percent of retailers felt consumers valued products made in the U.S.; however, an accompanying survey of consumers found only 19 percent sought out clothing/footwear made in the U.S. during the pandemic.

AAFA’s Steve Lamar said the gradual shift to U.S. production has been going on for around 12 years. He believes the trend has been accelerated during the pandemic to support speed to market and reduce souring risk. He agreed the nearshoring direction was “not about feeling good, patriotic and philanthropic,” but about improving supply chain execution.

Lamar added that for most, investments in U.S. production are about supplementing and diversifying production elsewhere, whether in China or Vietnam. Technology is also supporting the return to U.S. manufacturing.

Indeed, Lamar said that in most cases, the traditional manual-labor production jobs that left decades ago aren’t coming back to the U.S., but new technology-driven positions are being created. Lamar said, “The new U.S. apparel production workers are less likely to be making the apparel and footwear, and more likely to be building the programming and operating the technology that will then, in turn, make that apparel.”