MEC Hopes For Revival With Sale 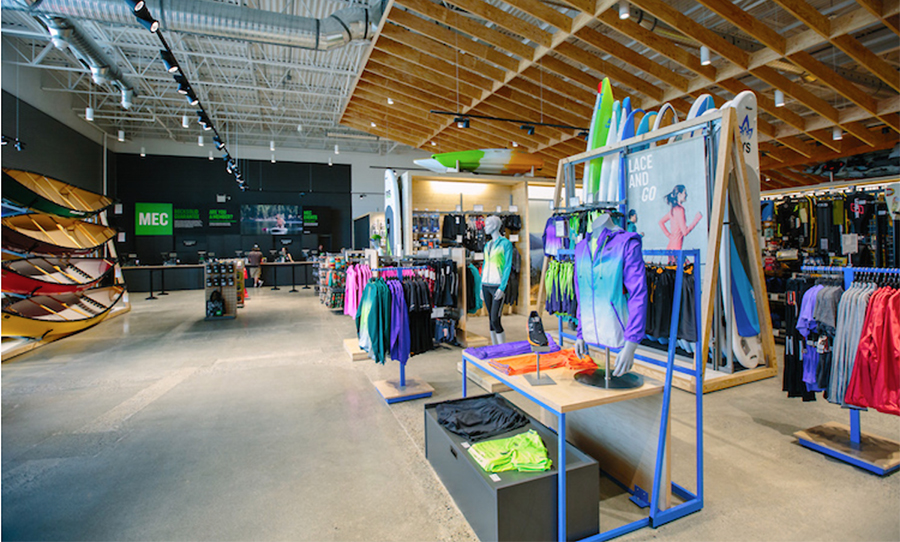 Mountain Equipment Co-op (MEC), Canada’s largest outdoor chain, will end its 49 years as a co-operative with a sale to Kingswood Capital Management, a Los Angeles-based private investment firm. The sale is designed to help stabilize the struggling business.

The assets are being acquired through the Companies’ Creditors Arrangement Act (CCAA) — legislation that allows financially troubled companies to restructure.

The sale comes after MEC, which operates 22 stores across Canada, in July announced the lay off of retail employees, citing challenges managing through the coronavirus that had earlier forced widespread temporary store closures. The outdoor retailer previously announced layoffs at its headquarters in April, stating it was “experiencing severe cash flow issues as a result of COVID-19,” and had shifted to maintaining essential operations in what it called “a ‘keep the lights on’ model.”

But MEC was facing financial difficulties long before the pandemic. In its year ended  February 24, 2019, MEC lost Canadian $11.5 million after restructuring charges against income of C$11.7 million the prior year. Sales in the year improved 1.7 percent to C$462.4 million from C$454.8 million a year ago, but the growth slowed year-over-year. The retailer traced its challenges to inventory backups, supply chain problems and ever-increasing online competition.

In a statement, MEC noted that it had formed a Special Committee of the Board engaged in an extensive examination of options and alternatives to address the “persistent financial challenges faced by MEC’s business in recent years” that had been “exacerbated by the unprecedented disruption of the COVID-19 pandemic”

MEC said the challenges “impacted MEC’s ability to secure a refinancing on terms that would meet MEC’s future needs.” The retailer had been financed through a syndicate of lenders led by Royal Bank of Canada that expired on August 3.

As part of the review, the Special Committee, in concert with advisors:

The Special Committee ultimately recommended the sale. MEC said in a statement that the acquisition will strengthen MEC’s balance sheet, preserve jobs and guarantee members continued access to authentic advice and high-quality products at competitive prices.

Said MEC’s Board Chair Judi Richardson in the statement,  “Despite significant progress on a thoughtful turnaround strategy undertaken by new leadership, no strategy could have anticipated or overcome the impact of the global pandemic on our business. Today’s announcement, including the transition from a co-operative structure, is creating a positive path forward for MEC. Kingswood’s commitment to honoring the MEC ethos and the solid financial footing that this transaction will provide gives us tremendous confidence in the future. Since our founding in 1971, MEC’s deeply loyal customers have been synonymous with who we are and what we do. That won’t change.”

In an interview with The Globe and Mail, Richardson said the board reached out to more than 65 lenders and launched a sales process. Nine bidders signed letters of intent and a “handful” of offers arrived. Kingswood was chosen because it committed to retaining a minimum of 17 of MEC’s 22 stores, the most of any bidder.

The commitment will save 75 percent of the retailer’s jobs. MEC has reportedly eliminated about 900 jobs since January and now employs approximately 1,500.

“We have created a path forward for MEC,” said Richardson. “They gave us the greatest opportunity to have a very large presence across the country.”

“MEC is an iconic brand founded on strong values and has a loyal following,” said Kingswood’s Managing Partner, Alex Wolf, in a statement. “We have tremendous respect for those values and the loyal membership and are honored to be partnering with Canadian operating partners who will represent us on the ground in Canada working with MEC’s management team following the closing to ensure a bright future for MEC. Upon completion of this transaction, we – together – can inspire and equip Canadians in leading an active outdoor lifestyle for years to come.”

According to News 1130 in Vancouver, two grassroots groups, reportedly of MEC members, have joined up to urge a stop of the sale. The pair of petitions have together amassed more than 5,000 signatures. According to the group’s  Change.org petition, “This decision to take one of Canada’s treasured co-op businesses private was made by the board with no mandate from or consultation of the 5.4 million MEC members across Canada. We call upon the MEC Board and Management team to cancel this decision to sell to a private equity firm – and engage with and consult MECs members. This decision to privatize MEC will take away democratic decision making power from the MEC members – and put at risk the socially-conscious cooperative outfitter that MEC is.”

A second petition on Change.org, “Save MEC”, has collected a similar number of signatures stated MEC is a $500 million per year business with tremendous wealth in real estate assets. Selling off the co-operative not only disenfranchises its members but will hand over its value with little oversight or accountability.

Steve Jones, a co-op member and past critic of MEC’s board, told the Globe and Mail, “There was no communication with members. Members feel very passionately about the purpose of the co-op and we should have the first right of refusal to provide the funding to save our co-op.”

The report noted that MEC’s challenges included the unionization this year of two MEC outlets in B.C.

Arrata’s moves included subletting the Vancouver head office to save money and narrowing the chain’s focus on core categories such as climbing, camping and snow sports. By April of his year, however, the Crunch Time program was “put on the backburner” to address issues surrounding COVID-19.

Certain co-op members in the past had complained the co-op has been spending too much on stores in Toronto and Vancouver, focusing more on jean jackets and running shoes over core outdoor offerings, and replacing the 1% for the Planet donation program with an internal program.

Speaking to CBC Canada, Claus said the decision about which stores remain open is “not going to be a long and drawn-out process” and should be decided soon. He also emphasized the MEC will retain its Candian roots and outdoor ethos.

“Given who we are and what we know of the business and how it operates and the culture, and bringing our Canadian element to it will help ensure that the brand will last a long time,” Claus added. With more than 30 years of experience in retail, Claus was a former CEO of U.S. discount retailer Save-A-Lot and also led Red Apple Stores and A&P.

The co-op members will be unsecured creditors in the restructuring and sales process under the Companies’ Creditors Arrangement Act (CCAA). MEC stores and e-commerce will operate through the CCAA process.