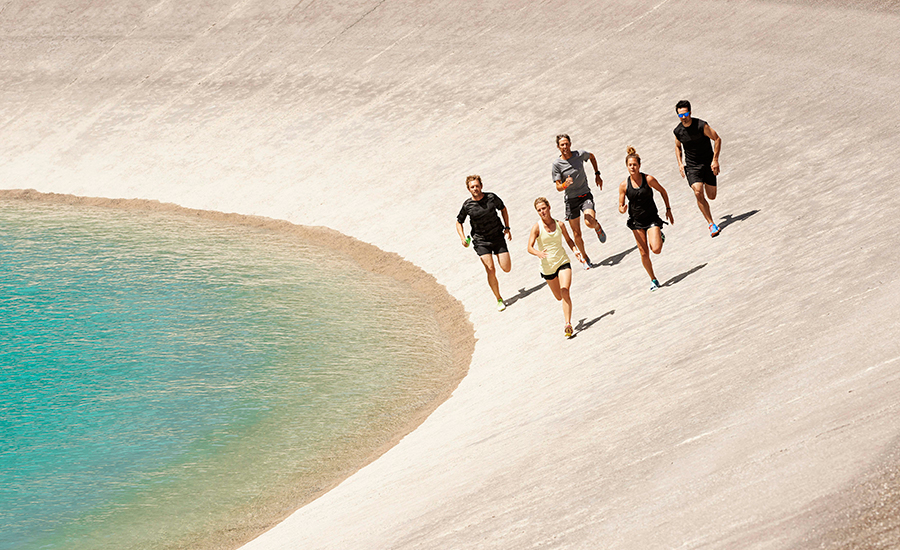 While much of the talk over the last few years in road running footwear has been around minimalist or maximalist cushioning, some of the most notable changes have been more quietly occurring with minimalist approaches to upper design. The biggest driver for consumers continues to be lightweight.

“Runners are so savvy and well read these days, which pushes us to do the same so we can provide innovative solutions to their needs,” said Claire Wood, senior footwear product line manager at New Balance. ”We want to design product that has what it needs, not just extra pieces for gimmick. Every part is purposeful, if it doesn’t need extra overlays than we don’t put them there.”

The performance running story also has its challenges, as a big influx of more fashion- and value-oriented running shoes continues to grab market share. Overall running footwear sales are up just 1 percent in dollars at industry retail, over the past 52 weeks through May 14, 2016, according to SSI Data*. And all the growth is coming from the fashion and value subcategories, which now accounts for nearly 60 percent of the market. 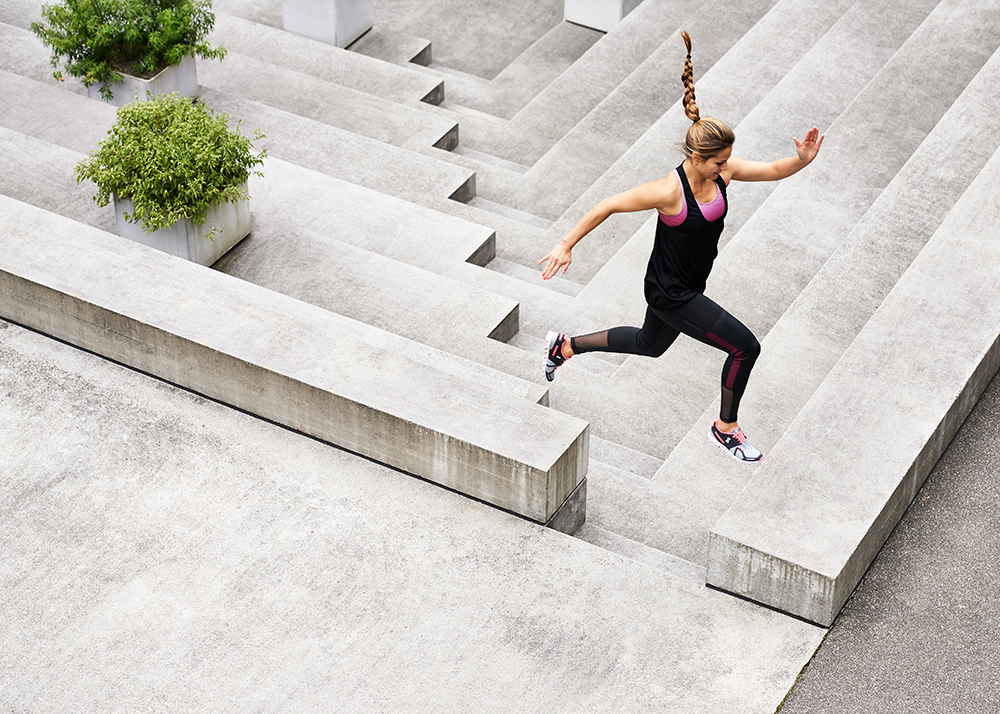 Photo courtesy On and Thomas Stoeckli

Multiple Options
Many performance running brands continue to focus on delivering minimalist shoes for the segment of runners that learned to love that experience, while also addressing extra cushioning underfoot and reaching more runners. Overall, the focus is on multiple options.

“Runners realize they don’t have to run in the same shoe every day, and different shoes can fit into their training,” said New Balance’s Wood. “Some days they might need more underfoot, other days less, and there is a lot of variety in between.”

“Runners are getting more adventurous in terms of what they’re willing to try including materials, midsole foams and nontraditional running silhouettes,” observed Newton. “Millennials are a great example of this; they’re more likely to try new and faster looking silhouettes. They also want to be able to use their running shoes for more than just a run.”

“More than ever, consumers want choices,” Asics’ footwear and apparel product specialists said in a combined statement. “Consumers are looking for clean designs, but millennials continue to demand frequent advancements in innovation and are drawn to personalized customization.”

On, the Swiss brand that stands out for its distinctive rubber pods on the outsole, believes its Cloudtec technology continues to sit in the sweet spot. ”Extremes don’t work,” said Co-founder David Allemann. On’s Cloudtec technology acts to stabilize the foot strike and activates postural muscles, putting the runner in control. Overall, Allemann believes “simplicity and accessibility” holds strong appeal across a wide spectrum of runners with busy lifestyles.

“Today a shoe needs to support effortless running,” Allemann said. “Saying this, it’s not about making extra time for running, running can also be included in your everyday life: you can run to work, you can run to your favorite sport, etc.” 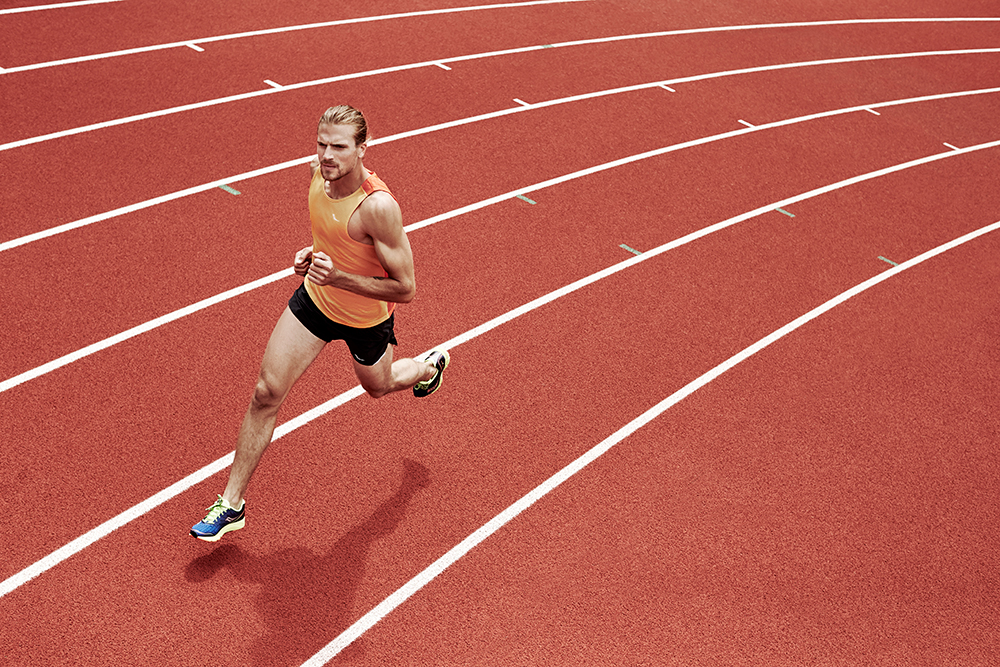 Looks Matter
The rush toward fashion running styles can be a value play for some consumers — those that want to look the part, but don’t actually require top-of-the-line performance – but it’s also about sleek looks and something that works in an urban environment.

The question arises for performance brands how to provide, but hide, all that lightweight cushioning, or how to design a stability shoe that doesn’t look like one.

Wood at New Balance said the brand’s 860v6 stability shoe has benefitted from a makeover. “We are modernizing the design with beautiful cosmetics and just because it has been in the marketplace for a few years, it remains extremely relevant, what we call a ‘go-to’ zone.”

She added that while some runners want bright, bold colors, others, especially those in the city, want a more tonal silhouette. “In the past, we would hone in on one trend or color story where now we are offering a range of colors to meet the needs of the modern runner and the variety that they want.”

Altra Co-Founder Golden Harper sees the same trend with a big uptick in saturated natural tones such as forest green, glacier blue and rust orange. The brand is also generally seeing less white.
Skechers’ head of technical development, Kurt Stockbridge, sees both color and the use of color blocking being influence by a retro running color palette. “Solid colors and earth tones are back with a more limited bright color pallet used as accents. Midsole sidewalls are also a trending canvas for aesthetic exploration,” he added.

According to Brook’s Newton, “good prints that pop with black tights are hot with women now.” 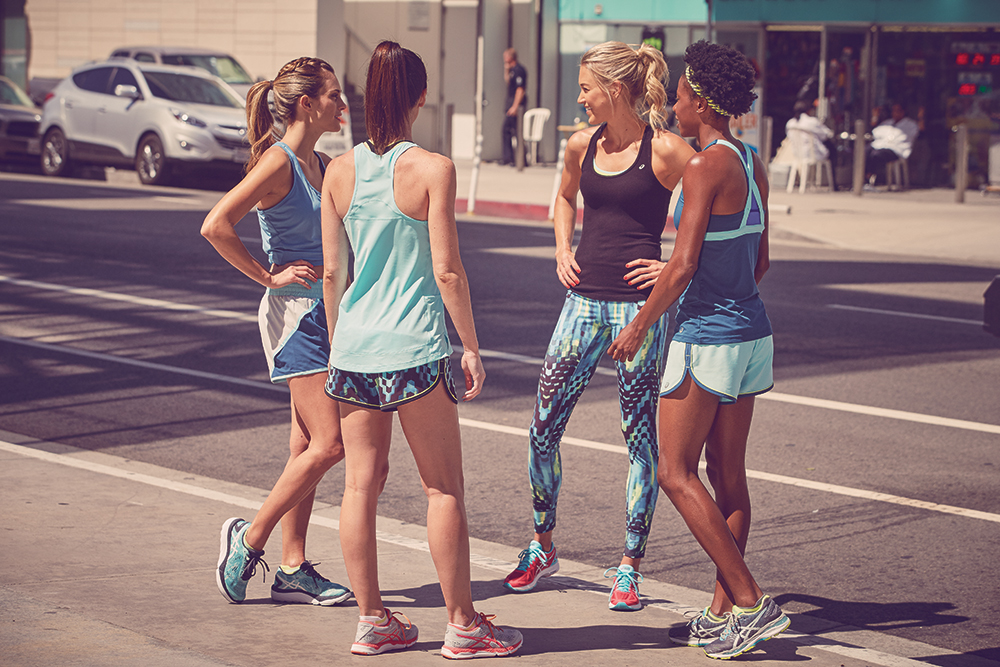 Performance Advances
Pat O’Malley, president of Saucony, noted that one of the bigger technological advances is being able to make a cushioned running shoe that’s much more stable than in the past. That has enabling brands to offer lighter, more flexible and more cushioned shoes to runners who typically would need more rigid or structured shoes for support. “You don’t have to choose a shoe with more stability features, because cushioning shoes are now inherently more stable,” said O’Malley.

In upper construction, the use of engineered mesh provides support in key areas while open weave construction adds flexibility in other parts of the shoe. The overal techniques reduce overlays to create the clean and sleek upper that’s in demand by the consumer, but also makes shoes fit more like a slipper instead of something more structured around your foot.

“While it might have started as a style trend, we see it as a performance and fashion advantage,” Brewer said. “People wear running shoes for many different reasons, and knitted uppers allow us to speak fluently in the language of each consumer.”

A more pervasive trend that Altra’s Harper sees is that no matter the running category, lighter weight models rule.

“Runners can feel a difference when they wear a lighter weight shoe that is still cushioned and supportive, which is really what Altra specializes in,” Harper said. An example would be a nearly 20 percent weight reduction in its Lone Peak Neoshell, which also allowed Altra to make a mid-height of the same shoe for about the same weight as the old low-cut version, 12 oz. Said Harper, “This is unheard of for a mid-height shoe with waterproof fabric.” 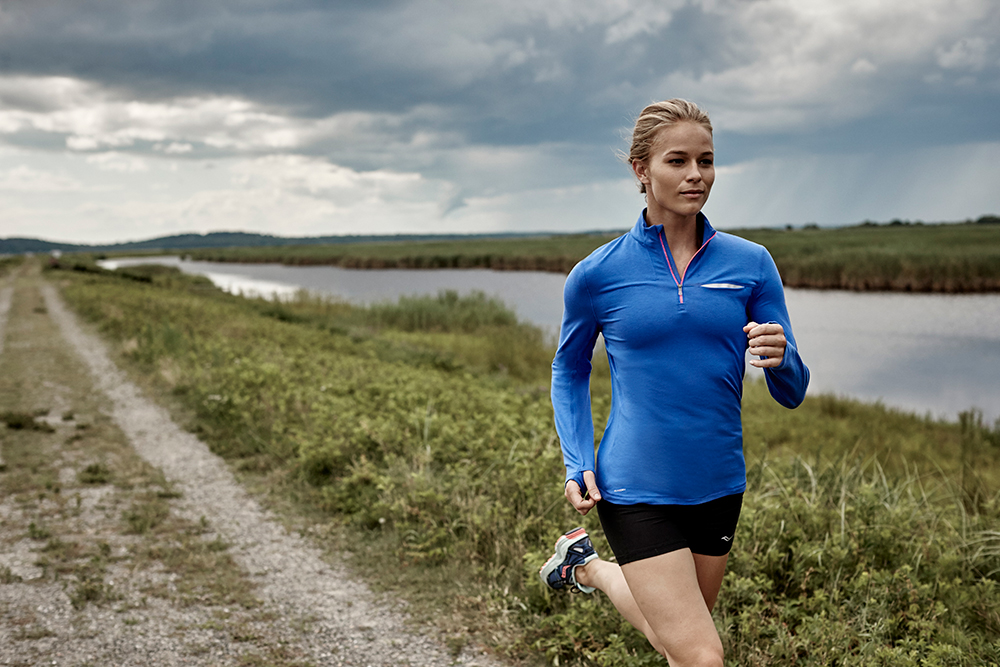 Finding The Sweet Spot
As the minimal-maximal debate continues, most brands are settling somewhere in the middle.

While stack heights were a focus during the minimalist craze with the attention to zero-drop and 4mm-drop models, O’Malley said they’re now more of an “expected part” of the purchasing discussion rather than the ”lead” part. Saucony’s tests continue to show that 8mm-offsets for most runners “really sets the body up the right way to interact with the ground to benefit the runner… and it just feels better.”

Gretchen Weimers, vice president of product for Hoka One One, said minimal and maximal are well-worn industry terms to describe cushioning, but many runners are just looking for comfortable and protective shoes.

“New materials and technology means that runners can still have the comfort of an oversized shoe without the weight and bulk of previous models,” said Weimers. “Hoka continues to push the boundaries by taking their signature cushioning and stability and providing consumers with a variety of weights and stack height options.”

Weimers said lightweight shoes that act and perform like racing flats without sacrificing comfort and stability are continuing to gain popularity among the racing community. With its new Carbon Rocket, Tracer, and Clayton models, Hoka believes it has taken its signature comfort from its bulky models and combined it with super lightweight materials to create shoes suitable for training or racing any distance from the 5k to the marathon.

“As consumers continue to demand a shoe that combines cushioning without the weight, materials and foams are evolving and become more important in creating a shoe that is lightweight, cushioned and attractive,” Weimers said.

Harper at Altra sees the “happy middle ground” between minimal and maximal driving running shoe sales. “Ultra cushion is still a trend, but it is certainly waning at the moment, despite continued strength for the super-fast growing category of ultra runners looking for extra foot protection in very long races,” he said. 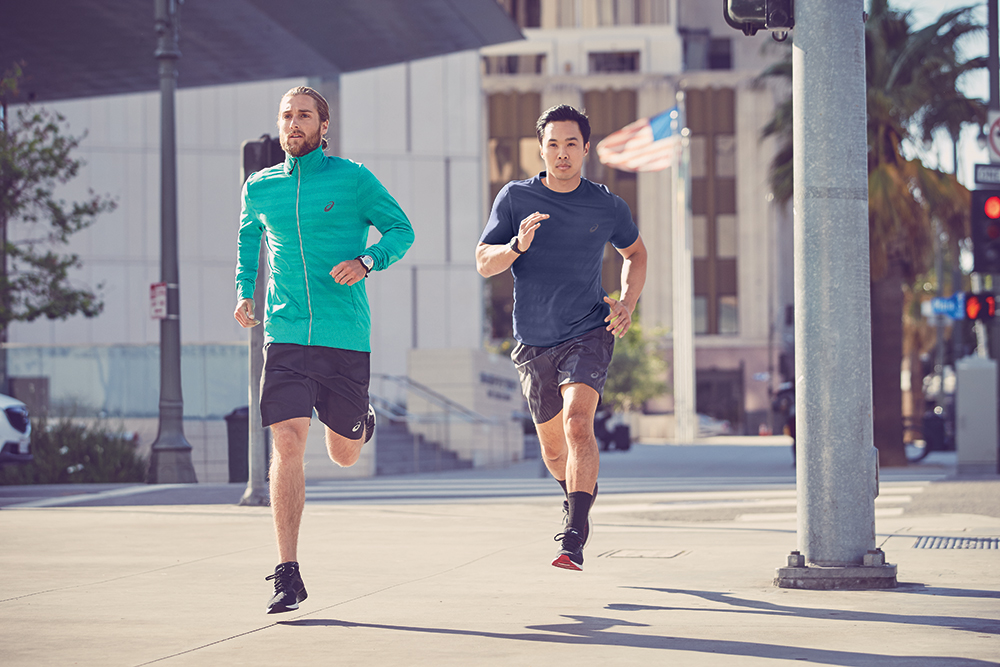 Brewer at Adidas said with the minimalist craze well back in the rear view mirror, cushioning is now expected. “And not just a little bit of cushioning. Now the cushioning must be abundantly apparent from the first instant,” he said.

While this butts up against some of the sleeker aesthetic trends, Brewer said Adidas early on was able to benefit from the shift toward more cushioning with the introduction of its Boost technology in February 2013. Brewer added that while other brands have pushed toward offering maximum cushioning, the “Holy Grail is not simply cushioning but cushioning combined with outstanding responsiveness.”

Stockbridge at Skechers sees the middle ground as the best place to be these days.

“Runners generally love responsive cushioning, but many do not wish to sacrifice ground feel, weight and stability to get it,” said Stockbridge. Overall, Skechers sees runners responding to a less-is-more approach to design across categories. These include simpler solutions and fewer (but broader) purpose components that weigh less. 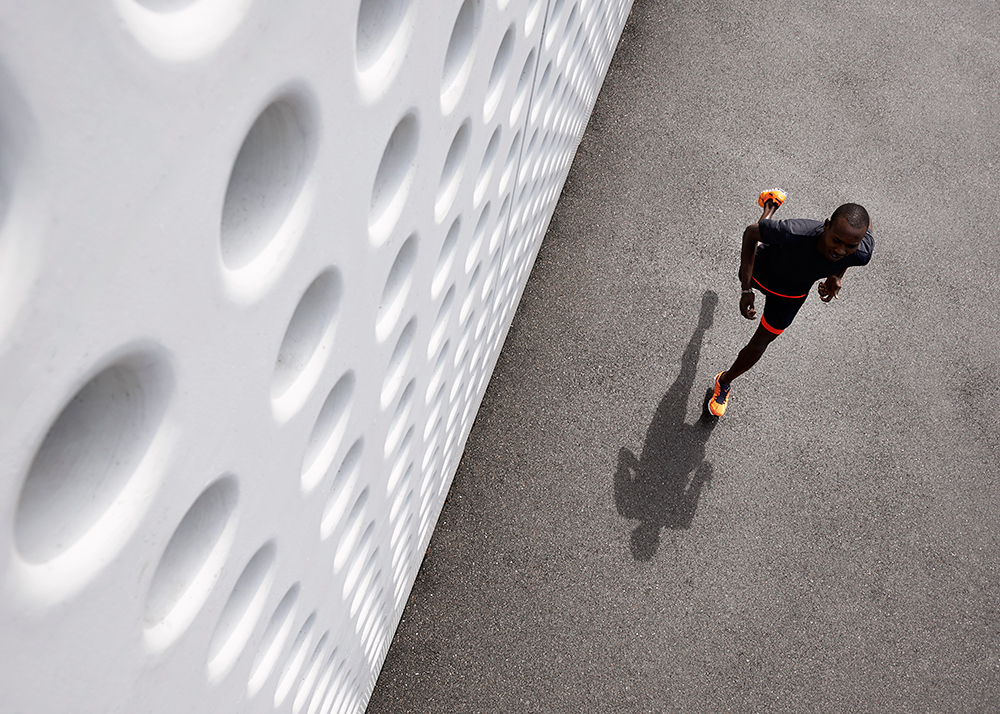 Photo courtesy On and Thomas Stoeckli

Onboard Tech
Under Armour, which owns MapMyRun as part of its Connected Fitness platform, finds that based on its app-collected data, women are logging more runs than men, especially among runners under 35 years old.

“These young female runners are really leading the trend in elevated and stylish running apparel and footwear,” said Under Armour in a combined statement from its running product team.
Under Armour believes the ability to track a runner’s performance is becoming a bigger part of the run experience and will work its way into footwear design. Earlier this year, Under Armour introduced the Gemini 2 Record Equipped, a shoe that can track an individual’s run without a phone or other technology present.