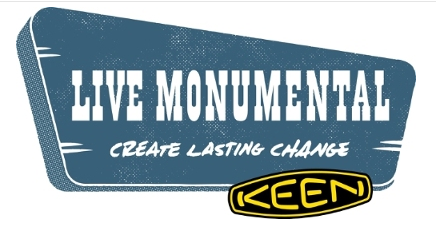 Keen Footwear is launching the Live Monumental campaign to raise awareness for preserving public lands. As part of the campaign, Keen aims to collect more than
100,000 signatures on a petition on livemonumental.com, to demonstrate
massive support from around the country for the designation of new
national monuments.

“There are nearly three acres of public land for each person in the U.S. Through the Live Monumental summer road trip and digital campaign, we will bring the Keen brand promise of building stronger communities and a healthier planet to life by advocating for new national monument designations to preserve some of those lands for their recreation and conservation value,” said Linda Balfour, Keen brand marketing director. “We invite you to join the movement to protect the places we play.”

Through the Antiquities Act created by President Theodore Roosevelt in 1906, the President of the U.S. can protect natural, historical and cultural wonders by designating them as national monuments.

Getting the wheels rolling in Keen's hometown of Portland, OR, the campaign RV will make its way down the west coast, across the Rockies, through the Midwest and onward to the Southeast and Washington, DC, stopping in towns and cities along the way to raise awareness, gather signatures and celebrate national monuments.

A central stop of the tour will be the annual Outdoor Retailer Summer Market in Salt Lake City, UT in early August, where Keen will host a monumental celebration at Keenfest to engage the outdoor community, harnessing support for the protection of the places we play and collecting signatures on the petition.

The crown jewel of the Live Monumental campaign will be presenting the scroll of signatures to government officials on Capitol Hill in September.

How can you get involved?