Wesley R. Card, The Jones Group Chief Executive Officer, stated: “We are pleased that our revenues for the first quarter exceeded our expectations and registered an 8 percent increase over last year.  The acquisition of Stuart Weitzman and growth across all segments contributed to this increase.  While our gross margin declined, it was in line with expectations and better than the trend we experienced in the second half of 2010, as we effectively managed cost pressures and tightened our inventory plans for 2011.”

John T. McClain, The Jones Group Chief Financial Officer, commented: “Our financial position remains strong.  We ended the quarter with approximately $307 million of cash and our revolver undrawn.  We entered 2011 with a more conservative, tightened inventory buy plan.  We will continue operating in the same manner throughout the remainder of 2011, focusing on our management of inventories and expenses to improve margins and maintain a strong balance sheet.”

Card concluded: “We are cautiously optimistic that consumer spending will remain relatively strong.  In the current environment of slow improvement in the overall economy, the consumer has been resilient and continues to buy into new and fresh designs.  Given the mixed signals in the economic picture, we will continue to plan tightly and exercise discipline in all areas of our operations as we continue to strengthen and nurture our brand portfolio.” 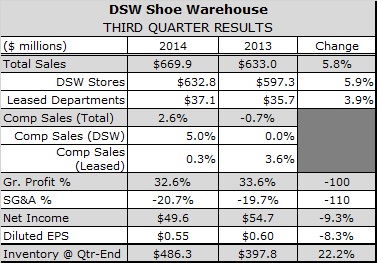 Ahead names Eddie Fadel as New Director of Merchandising