Is Team Sports Participation Bouncing Back? 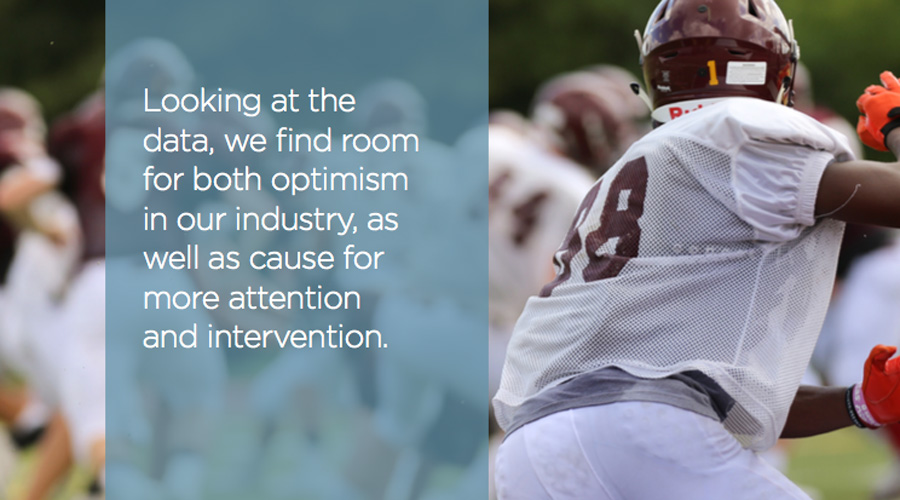 While driven by casual rather than core, frequent participants, the U.S. is seeing an upward trend in participation across most team sports, not only in the faster-growing niche sports like rugby and lacrosse but also established, traditional sports including basketball and baseball.

That’s according to SFIA’s “2016 U.S. Trends In Team Sports,” which offers a deep analysis of 2015 participation rates.

Basketball, for example, saw a 1.5-percent growth in participation in 2015 versus 2014. Baseball rose 4.3 percent, and tackle football climbed 4.1 percent.

Overall, participation amongst the traditional sports, which comprise the bulk of participation, showed positive growth from 2014 (aside from touch football, which ticked down 1.5 percent).

“Multiple factors, including a stronger spotlight from key figures — including the likes of Michelle Obama, as well as the four major sports leagues in the U.S.  — on American youth’s declining levels of activity appears, in the short term, to have potentially contributed to a positive increase in participation across most major team sports,” SFIA’s researchers wrote in the report.

Baseball has now shown a net positive increase in average annual growth over the last three years. Other traditional sports, like outdoor soccer and tackle football, have trended up in participation in the last two years, a positive sign following several years of declines. Outdoor soccer participation inched up 0.4 percent in 2015 versus the prior year.

Among other old-school team sports, cheerleading and ice hockey have seen the strongest uptrend in recent years. Cheerleading was up 4.4 percent last year, while ice hockey climbed 5.1 percent. Swimming on a team, up 6.7 percent, has also been on the rise in recent years. Ultimate Frisbee, paintball and grass volleyball all saw declines.

Not surprisingly, many of the still-emerging niche sports such as lacrosse, rugby and roller hockey saw some of the strongest gains due to growing interest and small participation bases. Lacrosse was up 4.1 percent and leads the industry with a net participation increase of 47 percent in the 2010-2015 period.

Roller hockey saw the fastest growth in 2015, up 9.8 percent, and has added 39 percent more participants over the last five years. Rugby, up 5.7 percent last year, has increased participation by 43 percent. Field hockey was up only 0.5 percent in 2015, but has grown 32 percent since 2010. 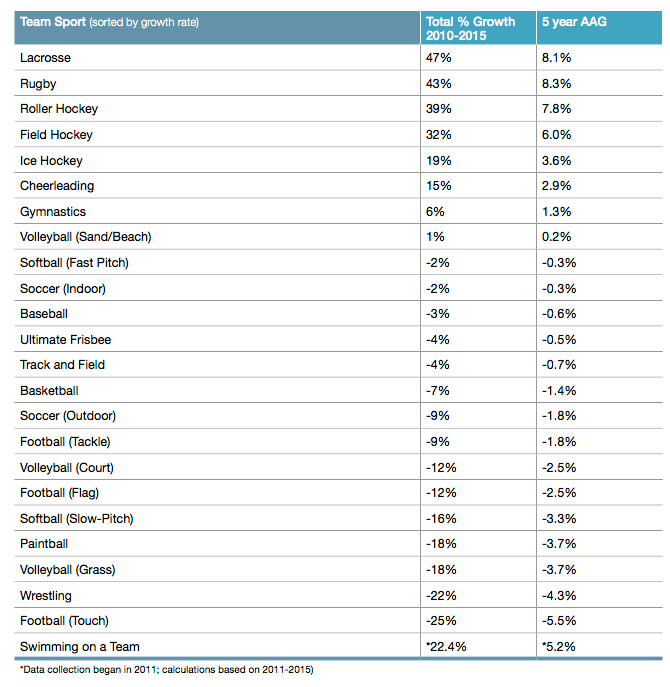 Concerns With Core Participation
While casual participation across all sports is up 3 percent between 2011 and 2015, core participation declined 6 percent and is a concern. SFIA noted that core participants “are the lifeblood of our industry, whose frequent and continued play provide the baseline of industry-related sales and revenue.” The trend is reflective of broader generational shifts across the active lifestyle industry, where younger generations are pursuing more of a “holistic approach to health,” seeking participation in a greater variety of activities versus mastery in a few. Other factors inhibiting overall and core participation in different ways include the high cost to play, SFIA officials said. These include the equipment costs necessary for a sport such as lacrosse. Travel teams can also cost several thousand dollars a year. Moreover, youth who can’t afford to compete with their peers enough to travel are also opting out of team sports altogether.

Another big concern: 44 percent of children aged 6-17 surveyed reported that they do not participate in team sports. The industry is facing competition for leisure time with kids today having half as much free time as they did 30 years ago. While much has been made about competition from video games, time spent on the internet or in front of the TV is growing, along with eSports, competitive online video gaming.

SFIA believes time constraints can be overcome by bringing more of the “fun” aspect back into team sports while still communicating and instilling health and social benefits. SFIA credited efforts by the major sports leagues in funding development programs while touting the support of the PHIT Act to overcome some of these issues. SFIA wrote, “For the health of the team sports industry and the American populace as a whole, we feel it necessary to make sure that sports feel accessible to anyone, so that we may bolster casual participation and sampling, and convert this audience into lifelong, dedicated sports participants.”

Other findings in the report included: