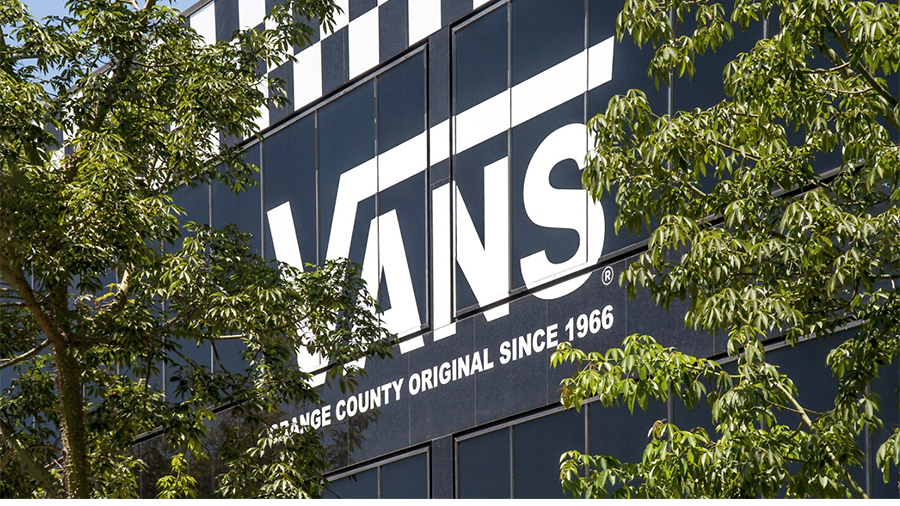 VF Corp.’s third-quarter earnings topped analyst targets, with The North Face accelerating momentum during the critical holiday quarter. However, shares were trading down in mid-day trading Friday as VF trimmed its sales outlook due to a deteriorating performance by Vans.

By segment, revenue for VF’s Outdoor segment in the fiscal year was raised and is now expected to expand between 26 percent and 28 percent versus the previous expectation of a 25 percent to 27 percent increase. The raised guidance reflects the strong quarter performance by The North Face and strength across its emerging brands. Its Outdoor segment includes The North Face, Smartwool, Icebreaker, and Altra.

Revenue for its Active segment is now expected to increase between 31 percent and 33 percent, down from previous expectations of a 35 percent to 37 percent increase. The Active segment includes Vans, Supreme, Kipling, Napapijri, JanSport, and Eagle Creek.

The Work segment, which includes Dickies and Timberland Pro, is still expected to see revenue for the year increase between 19 percent and 21 percent.

Adjusted EPS for the fiscal year is still expected to be around $3.20.

Vans is now expected to show growth in the range of 21 percent to 22 percent year-over-year versus prior expectations of an increase between 26 percent to 28 percent. On a two-year basis, compared to the pre-pandemic period of FY20, growth is expected to now be 3 percent to 4 percent compared with previous guidance between 7 percent to 9 percent.

“While we have made great progress in certain regions and products on a global basis, Vans did not meet expectations in Q3 with mixed holiday performance, reflecting heightened disruption across China and a slower than expected recovery in Classic footwear,” said Steve Rendle, VF’s chairman, president and CEO, on the analyst call.

Rendle said Vans did show sequential quarterly improvement in the quarter but continues to run below expectations set in May 2021 at the start of the year. To revive growth, Vans’ team focused on three drivers: China, Classic Footwear and Brand Heat.

On China, Rendle noted that following a strong rebound in the first half of calendar 2021, the Chinese economy had seen slowing growth reflecting the government’s aggressive policy response to COVID surges with the slowdown affecting all of its brands.

All brands are exploring new social commerce outreach, amplifying key festival activations and product drops and taking other steps to offset these pressures.

Specific to Vans in the region, the skate brand is increasing its emphasis on delivering China-relevant products and content through a greater level of localization and evolving its digital strategy, including leveraging social commerce opportunities. Vans is also leveraging its in-store environment and operations to drive traffic and conversion while deepening community engagement with the growing customer base in China, including Vans Family initiatives, where Vans now has close to two million members in China since its launch in July.

Rendle said Classics is “returning to an always-on Classics demand creation model, with a higher degree of innovation in design, supported by enhanced and targeted marketing support with a dedicated campaign launching globally throughout this year, starting with the U.S. market next month.”

He said Vans expects to apply learnings from the Sk8-Hi back-to-school campaign, which led to over 20 percent growth from that silhouette over the past two quarters.

Finally, Rendle noted that while Vans’ brand health is strong, its brand heat remains below pre-pandemic levels. To address this, Vans is focused on increasing the flow of innovation and product stories, increasing wearing occasions for existing consumers, and investing in attracting and retaining new consumers.

Said Rendle, “We remain encouraged by the early results of our 52-week drop strategy, which we’re leveraging to reward our loyal members with early access to new product stories and to drive energy and engagement with new and existing consumers. We believe that pivot in our Classics marketing underway will play a key role here as well.”

By region, the Americas performed well for Vans, posting its first positive quarterly growth versus fiscal 20 since the start of the pandemic. Classics showed “encouraging sequential improvement” but remain below pre-pandemic levels.

Rendle said, “Vans has a long history of success with a rich heritage and strong brand equity. I’m confident there’s a long runway ahead for future growth.”

The North Face delivered the largest quarter in its history, with revenues over $1.2 billion in the period. TNF represented over a third of VF’s Q3 revenue and was its largest brand in the quarter. Said Rendle, “Truly a fantastic performance during the brand’s highest volume quarter of the year.”

TNF continues to see broad-based growth across categories, with Snowsports, Sportswear, and Logowear growing over 20 percent.

Limited-edition releases continue to drive brand heat for The North Face. Rendle said, “The second chapter of the TNF Gucci collaboration has generated over two billion impressions since launching in December. And the campaign, “It’s More Than A Jacket,” launched this fall, which has been one of the most successful campaigns in terms of audience reach and engagement, earning nearly 200 media placement and driving one billion impressions spurred by celebrity and influencer endorsements.”

Timberland delivered 11 percent year-over-year growth in the third quarter, led by a strong sellout season with key accounts in the U.S. and with the brand’s channel.

Timberland continues to see strength from the Green Stride innovation platform, which drove strong sell-through across all regions globally.

Encouraging performances were also seen in women’s across core hiking and heritage boots. Apparel growth accelerated globally, led by newness and highlighted by 90 percent growth in the Americas.

Successful collaborations continued to deliver brand heat for Timberland, including a quick sellout of a Supreme collaboration and strong engagement from a recent Tommy Hilfiger collaboration. Said Rendle, “We are pleased with the building momentum with Timberland, and looking ahead, we remain confident in the brand’s long-term potential for profitable growth.”

Dickie’s outlook remained unchanged. FY22 revenue is expected to increase over 20 percent year over year and over 30 percent relative to FY20.

In the third quarter, Dickie’s sales grew 4 percent versus fiscal 20 levels, driven by continued strength in the Americas. Said Rendle, “Elevated sell-through and strong demand signals indicated the brand’s evolving integrated marketplace segmentation is delivering as planned. And the brand continues to see growth from both the workwear and work-inspired segments. We’re also pleased to see the brand’s profitability continuing to improve ahead of plan.”

Supreme, acquired in December 2020 and ranking among VF’s largest brands, continues to see strong demand and sell-through online and in its stores. Sales reached nearly $200 million in the quarter despite doors closing globally at various stages due to pandemic surges.

“We had a strong close to the fall season as the Supreme team partnering with VF’s supply chain were able to align inventory flow with their revised drop schedule,” said Rendle. “The Supreme team remains highly focused on their store-led geographic expansion strategy as a key element in showcasing the brand and its unique collection.

The brand opened two stores in Europe this year in Milan and Berlin. Said Rendle, “The team continues to stay the course and create brand awareness in an intentional and authentic way. We’re excited about Supreme’s longer-term potential as a key brand within the VF portfolio.”

The gains were driven by the EMEA and North American regions, which experienced a negative impact from COVID-19 in the prior-year period.

Inventories were up 20 percent compared with the same period last year.

Matt Puckett, EVP and CFO, said on the call that VF continues to diversify its supply footprint and is making earlier commitments on raw material and inventory purchases to optimize supply moving forward. He said, “The logistics network remains under pressure as our teams continue to face unprecedented port congestion, labor shortages and equipment constraints. We expect these logistics challenges will remain with us throughout most, if not all of 2022. However, we’re taking active measures to mitigate the impact, leveraging our relationships to secure additional capacity and equipment, utilizing more ports and more carriers, and even chartering full-size jetliners when economical.”