Inside The Call: Skechers Bullish On Holiday Despite Supply Chain Hurdles 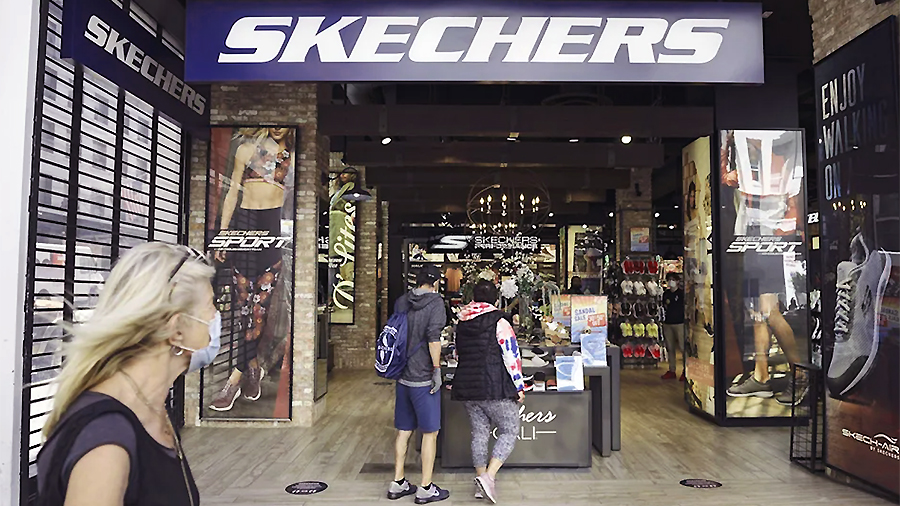 Skechers USA reported strong earnings and sales gains in the third quarter but delays tied to supply chain constraints caused both to come in below guidance, and the company’s outlook was slightly reduced for the full year. Skechers officials see the logistics challenges easing somewhat and remained upbeat on holiday selling.

In the quarter, sales reached $1.55 billion, a year-over-year increase of 19.2 percent to $1.55 billion. Sales grew 15 percent over the third quarter of 2019. When it reported second-quarter results on July 22, Skechers predicted sales between $1.60 billion and $1.65 billion. Wall Street’s consensus estimate had been $1.64 billion.

Net earnings in the latest quarter grew 60.3 percent to $103.1 million, or 66 cents a share. Skechers had projected EPS in the range of 70 cents to 75 cents while Wall Street’s consensus estimate had been 75 cents.

Supply Chain Disruption Hampers Q3 Growth
On a conference call with analysts, David Weinberg, COO, first addressed the supply chain challenges, noting that while many markets, including the U.S. and Europe, have eased pandemic-related restrictions, others particularly the Asia Pacific region, experienced extended and even renewed lockdown measures. Congestion at ports worldwide, especially in the U.S., and COVID-19-related closures of factories in South Vietnam where Skechers manufactures a limited amount of product, are causing shipment delays. Transit times doubled from what they were in the pre-pandemic period.

“This is a global phenomenon that we believe will continue to impact our business into the first half of 2022,” said Weinberg. “However, we are seeing positive signs that conditions are improving. Factory production in South Vietnam has restarted, albeit at a reduced capacity in some areas, and the congestion at some global ports has improved. We are optimistic given our strong start to the fourth quarter.”

The third-quarter sales gain of 19 percent was the result of a 20 percent increase in Skechers’ domestic business and a 19 percent increase in its international business, which represented 58 percent of total sales for the period. Double-digit increases were seen across all reportable segments, driven by the continued global demand for the brand’s Comfort Technology footwear.

Worldwide comparable same-store sales increased 31 percent, including 34 percent domestically and 25 percent internationally. Unit volume improved 17 percent with an average selling price per unit increase of 23 percent, reflective of a less promotional stance, the success of its Comfort Technology product, and a return to a more normal lifestyle and shopping behavior.

The increase in domestic DTC business was driven by a 43 percent gain in brick and mortar stores, benefitting from higher traffic and normalized operating hours. Domestic e-commerce increased 3 percent year-over-year, but 180 percent over the same period in 2019. Domestic e-commerce business was particularly impacted by limited product availability in the quarter. The increase in international DTC was primarily driven by rebounding demand and easing COVID-19 restrictions. Standout performances included triple-digit increases in Chile and Korea, double-digit increases in the UK and Mexico and strong growth in Canada, Peru and India.

Skechers’ international wholesale business grew 11 percent year-over-year and grew 10 percent compared to the third quarter of 2019. The quarterly sales growth was primarily driven by an increase of 62 percent in its distributor business and a 10 percent increase in China. The distributor business performed well, reflecting a more normal selling environment, particularly with its largest partner base in the Middle East and Africa.

Sales in its domestic wholesale business improved 10 percent in the third quarter and 17 percent compared to the third quarter of 2019. The growth came primarily from women’s GO Walk, men’s sport and work and its performance in casual running styles for men and women.

“Central to our global success is our Comfort Technology footwear,” said Weinberg. “Comfort, innovation, style, and quality are the Skechers product tenets. In the third quarter and over the last 18 months, consumers have been increasingly loyal to Skechers Comfort as we elevated our products with more fit offerings, as well as lightweight cushioning options and added durability to many styles.”

John Vandemore, CFO, said, “We continue to see very positive underlying trends with the majority of our domestic wholesale partners, including healthy sell-through rates and steady and average selling prices.”

Weinberg said that given Skechers’ global growth, it is strategically investing in both its distribution and corporate infrastructure. UK and China distribution centers became fully operational in the third quarter, and locations were narrowed down for a new DC in India. The first phase of a corporate headquarters expansion was completed at Manhattan Beach and an expansion of its North American distribution center will bring its Southern California facility to 2.6 million square feet in 2022. Both of these expansions will be LEED-certified gold.

“We believe our record results in the third quarter reflect our powerful global brand,” said Weinberg. “With factory production in South Vietnam restarted and transit times and port constraints improving, we are optimistic about the holiday season.”

Total inventory was $1.23 billion, an increase of $213.6 million or 21.0 percent from December 31, 2020. Increased inventory levels primarily reflect growth in the International Wholesale segment and higher merchandise in transit due to supply chain challenges with shipping and port delays.

The company said it believes that for the fourth quarter of 2021, it will achieve sales between $1.51 billion and $1.56 billion and EPS between 28 and 33 cents a share. The guidance equates to revenue growth of 14.4 percent to 18.2 percent from $1.32 billion in the year-ago quarter. Earnings were 24 cents in the year-ago period excluding a one-time tax benefit of 10 cents per share.

Vandemore reiterated that from a production standpoint, Skechers hasn’t been as impacted as other footwear vendors because the majority of its Vietnam production is not in the South of the country.

“The more disruptive issues have been widespread shipping container shortages, port congestion and last-mile transportation delays,” he said. These factors negatively impacted Skechers sales in the third quarter and their impact is evident in its quarter-end inventory balance including an incremental $218 million in in-transit inventory, a year-over-year increase of over 140 percent.

“Under normal conditions, we believe a meaningful portion of that inventory would have been delivered to customers in the third quarter,” said Vandemore. “At Skechers, our main objective remains delivering great comfort-infused products to our dedicated consumers and once product availability is normalized, we fully expect to deliver even better results than the remarkable growth of this quarter.”

“Our order book right now looks fantastic,” said Vandemore. “It’s going to be a question of how much product we can land and when can we land it. We’ve tried to incorporate what we see right now in terms of a flow of goods from the port to our distribution center and then on to customers, but that’s going to be the great unknown.”

“Our teams are working tirelessly to address the supply chain challenges across all touchpoints, resources, factories, container shortages, port congestion, and in-country transit, all with a goal of delivering Skechers Comfort footwear to our customers and consumers,” added Weinberg. “We are also keeping a close watch on local pandemic-related restrictions and the health of our global teams. We believe 2021 will be another record year for Skechers, a remarkable achievement given the uncertainties globally. We look forward to 2022, a year that will mark our 30th anniversary. We believe we’ll be exceptional from a marketing product and sales perspective and a time where we will continue communicating our message to consumers that Skechers is the Comfort Technology company.”