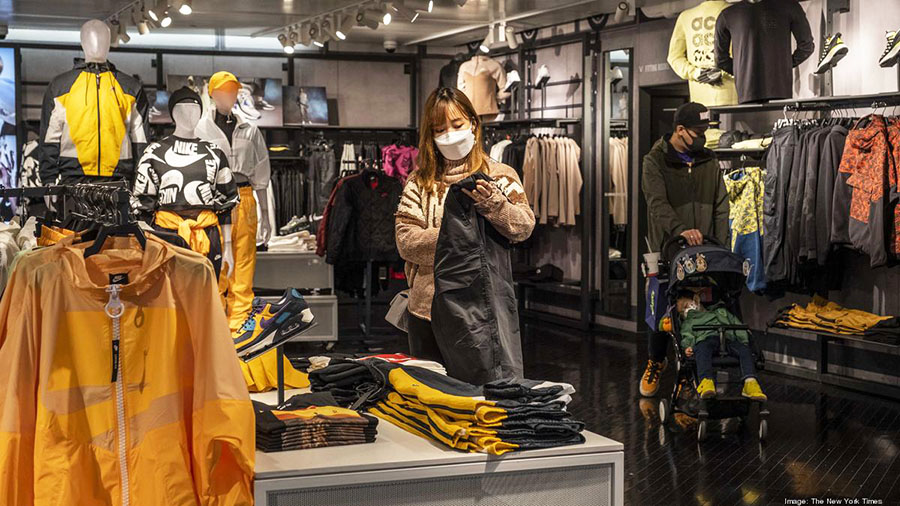 The coronavirus fallout on supply chains and increasingly consumer spending was addressed extensively on quarterly conference calls last week. Many expressed vast uncertainty on what disruptions the coronavirus may have on retail.

“We have no idea. I don’t think we’ve seen anything like this in a very, very long time,” Dick’s CEO Ed Stack said on his company’s conference call on March 10. “We’re like everyone else, we hope for the best, but we know it’s very uncertain out there, and we can’t predict what’s going to happen.”

As of March 10, Dick’s hasn’t felt an impact on sales so far in the current quarter. Said CFO Lee Belitsky, “We’re not really seeing an impact from the coronavirus,”

But, he said, there might be some slight reductions in inventory due to supply-chain issues in April. Belitsky said, “We may not get some of the products that we expected to get or we may not get them.”

Dick’s guidance for 2020 took into account some supply chain disruptions but it hasn’t attempted to consider what might happen if, like in China or Italy, there would be shutdowns of entire regions in an attempt to stop the virus.

As we enter 2020, we remain enthusiastic about our business and are pleased with the start to our year,” said Stack. “We will continue to focus on enhanced 2019 strategies, this includes optimizing our inventory and floor space, delivering differentiated merchandising and driving athlete engagement across all channels. Our financial outlook balances this enthusiasm with a degree of caution over the coronavirus and how it may impact our business.”

Stack and Belitsky said Dick’s was actively managing its supply chain and is starting to see Chinese factories where it receives products for its private label items return to operation. Third-party vendors that are sold by Dick’s are seeing only an isolated impact.

“They’re not indicating there’s a meaningful issue out there with their supply chains,” Belitsky said.

On a conference call with analysts, Kasper Rorsted, Adidas CEO, said the company’s business in Greater China performed strongly in the first three weeks of 2020 but has been experiencing a “material negative impact” since the outbreak. Due to a significant number of store closures — both owned and partner-operated — and pronounced traffic reduction within the remaining store fleet, revenues in Greater China have tumbled around 80 percent below the prior-year level between Chinese New Year on January 25 and the end of February.

Adidas now has 7 percent of its stores in China back in operation and pick-up in China is eventually expected to take place with signs that life is “returning to normal” in China. But he also said the recovery in footwear and apparel will be staggered.

Said Rorsted, “If you’re in the food business, you’ve got to shop every two or three times a week to fill up your fridge. That is not the case right now when it comes to footwear. So we are seeing that pickup eventually will take place. We just have an assumption that we are at the end of the food chain.”

Rorsted said he still expects Greater China to return to double-digit growth seen from 2015 to 2019 once the crisis is contained.

Adidas has also started to observe traffic declines with a corresponding negative business impact in Japan and South Korea although hasn’t felt any impact in the rest of the world. He added that while the company’s supply chain has also been facing disruptions, the majority of factories in China are operational again and global sourcing activities have not been impacted so far.

For the full-year, Adidas delivered upbeat guidance although it doesn’t reflect the impact of the coronavirus outbreak beyond the first quarter.

Clarus, the parent of Black Diamond and Sierra Bullets, is seeing some headwinds due to the coronavirus, John Walbrecht, president, said on a conference call on March 9. Specifically, the pandemic is affected its supply chain, which is running between 60 percent to 80 percent of capacity.

“We will not be able to offset the effect it [the coronavirus] is having on logistical disruptions and production delays in our supply chain,” Walbrecht said. “We are also currently seeing an impact on consumer demand in certain key international markets within the Asia Pacific region, specifically China, Hong Kong, Taiwan, Korea, Japan and Australia and Europe, specifically in Italy, France and the Netherlands representing approximately 15 percent of our consolidated business.

“Our outlook assumes a portion of these headwinds for the first half of the year. However, it does not consider any additional negative developments that could take place related to the buyers on our supply chains, logistics, geographical locations impacted and any negative impact on travel and consumer demand.”

Genesco, the parent of Journeys, Johnson & Murphy and U.K.-based Schuh, has seen store traffic affected, most notably in tourist destinations in both the U.K. and North America, and also in its airport stores.

“This is clearly a fluid situation which will undoubtedly change but our comp forecast reflect what we know today and only what we have seen in the trend in our business thus far,” said Mimi Vaughn, CEO, on the company’s March 12 conference call “We believe many of these factors are transitory and we currently expect to pick up in our business and the momentum to build in the second half, which is the most important time of the year with back-to-school and holiday.”

On the supply chain, Mel Tucker, Genesco’s SVP and CFO, said about a third of the goods it buys directly comes from China. Most of China’s factories are now up and running although some delays are expected. The company estimates that another 25 percent to 30 percent of its product from third-party vendors comes from China. The CFO said, “While many of these vendors have dual sourcing from countries in addition to China, we have less visibility here than for a product we sourced directly. So it’s also too early to determine the impact on goods we sourced indirectly. We have taken a conservative view of the first half of the year with wider projected comp ranges due to more limited visibility. The comp performance is planned higher in the back half.”

Vaughn said it’s too soon to know to what degree the coronavirus outbreak will specifically affect consumer spending. Said Vaughn, “it might hurt mall traffic for a time, but it will eventually be under control and we’re going to benefit on the other side of this from pent-up demand. And we typically tend to come out stronger on the other side. In the meantime, our digital business can pick up some of the slack, we haven’t had that tool at our disposal in prior times when we have seen a demand shock.”

Caleres, the parent of Famous Footwear, as well as a number of footwear brands such as Sam Edelman, Naturalizer and Allen Edmonds, is expecting headwinds between 15 cents to 20 cents a share in the first quarter on its wholesale brand segment, Brand Portfolio.

Diane Sullivan, CEO, president and chairman, on a conference call with analysts on March 12 said that all of its factory partners in China are up in running, worker return rates are in excess of 70 percent, capacity utilization is increasing, and product delay times are subsiding.

“On the other hand, consumer sentiment is harder to predict,” said Sullivan. “Our direct-to-consumer businesses thus far have been performing well, making it difficult to anticipate the broader impact a prolonged health crisis could have on the retail sector and consumer demand overall.”

Said Sullivan, “As expected in these times of uncertainty, we are leaning in and taking actions to ensure we are protecting the business overall. We are actively monitoring the leading indicators across the markets we serve. We’re assessing this every day and reacting in real-time by managing our expenses accordingly, reducing our open-to-buy where necessary, evaluating our promotional cadence, and being very disciplined in our management of inventory. In short, we will protect our people. We will protect our business and ensure we are prepared to be positioned for when the rebound comes.”

Dorel Industries, which makes juvenile products, bicycles and home furnishings, said its China-based suppliers had been scheduled to reopen the second week of February following Chinese New Year’s, but due to the virus, only started to reopen February 24 and that’s created some supply chain disruptions. Operations at its principal facility in Zhongshan are improving daily, and we are now at 100% production capacity. Other factories and suppliers are also back in operations and are shipping, but some not yet at normal levels.

The supply chain interruptions in China will impact the delivery of orders in the first quarter and possibly into the second. Despite the improvement, the coronavirus and related foreign exchange impacts will likely affect the first quarter.

Martin Schwartz, president and CEO, said on Dorel’s March 12 conference call said that although production was slower than normal, no significant impact was seen on consumer spending for Dorel products in January and February. Said Schwartz, “Historically, people have purchased juvenile products and personal recreation products, such as bikes as well as home furnishing during disruptions in the market. Dorel’s product portfolio gives consumers a wide choice of such items at various price points. Our three segments continued to experience increased online shopping, and with the virus, we expect more of this.”

From an operations standpoint, Dorel has spent the last few days re-setting the business, including enabling those to need to work from home to do so.

Regarding its outlook, Schwartz said the Dorel Sports’ segment “remains strong.” He said about the segment, ”The China supply chain is improving, and product is expected to be increasingly stable as production gradually returns to normal.”

Dorel Juvenile is also seeing strength in the marketplace and Dorel Home is expected to see increased sales this year.

Said Schwartz, “The unknown is the virus. Clearly, the world economy is in uncharted waters due to the ongoing virus, the full impact of which is difficult to predict at this time. No one knows what tomorrow may bring and significant changes are occurring almost on an hourly basis. We are very conscious of that, and we’ll continue to do what’s best for the company, but first and foremost, what’s best for the welfare of our employees.”