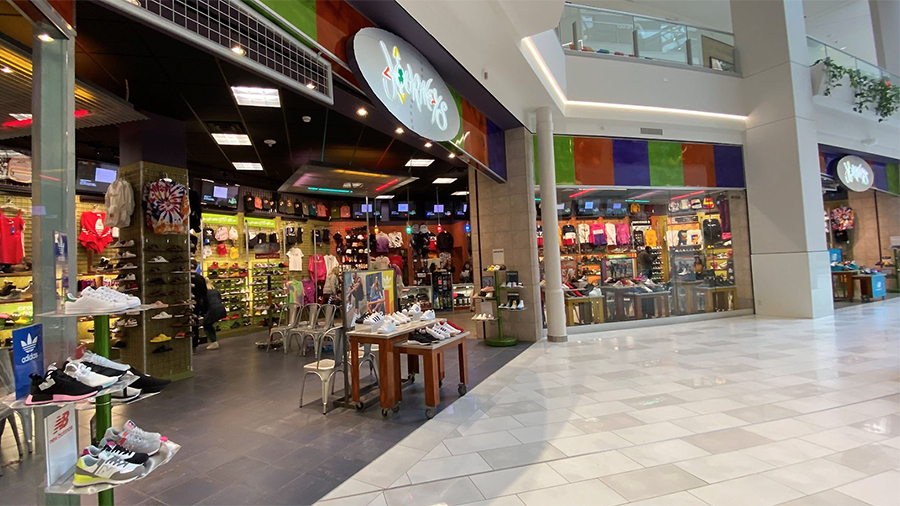 Genesco, Inc.’s first-quarter earnings came in well above Wall Street estimates as a rebound in its Schuh, and branded businesses helped offset inventory shortages faced by its flagship Journeys chain.

In the quarter ended April 30, sales slid 3.3 percent to $520.7 million, in line with Wall Street’s consensus target of $521 million. Sales grew increased 5 percent versus the first quarter of 2019, before the pandemic.

The year-over-year decline reflects the anniversary of the stimulus money distributed a year ago. Journeys, which was the largest beneficiary of the stimulus and was impacted by inventory delays this year, was down 16 percent, partially offset by Schuh, up 28 percent; Johnson & Murphy, up 46 percent and Licensed Brands, up 5 percent.

From a channel perspective, the company had increases in both its store and wholesale channels, with the store channel buoyed by Schuh having all its stores open this year versus just 19 percent of stores open during the quarter last year and consumers resuming more-typical in-store shopping patterns.

Genesco operated 30 fewer stores versus a year ago. Digital sales, as expected, were down versus last year; however, direct still held onto 70 percent of its gains and was up roughly 75 percent over the pre-pandemic first quarter. E-commerce sales accounted for 19 percent of total retail sales, down from 25 percent last year but up from 11 percent in the first quarter of 2019.

“Following record results in Fiscal ’22, the new year is off to a very good start,” said Mimi Vaughn, Genesco president and CEO, on a call with analysts. “While the year-ago period posed a difficult comparison due to government stimulus-fueled consumer spending, we are very pleased with our recent performance and the long-term trajectory of our business as we navigate some near-term turbulence and move past the COVID era fiscal tailwinds.”

Vaughn said Genesco exceeded both top and bottom-line expectations with notable strength at Schuh and in its branded business, which currently makes Levi’s and slippers and footwear under Dockers, Bass, Starter Etonic (Lifestyle), FUBU, and Phat Farm. It also includes the wholesale business of Johnson & Murphy.

“Had we had the inventory to fulfill demand at Journeys, our performance would have been even stronger,” said Vaughn. “These results underscore the progress we have made positioning the company for profitable growth through our heightened focus on increasing digital penetration, improving the economics of our store channel, and growing our branded sales.”

Highlighting top-line progress, she noted that compared to the pre-pandemic first quarter of 2019, revenue grew 5 percent despite having 90 fewer stores, while adjusted operating income was up 14 percent. Versus the pre-pandemic first quarter of 2019, digital sales jumped almost 75 percent and now represent 19 percent of total retail sales versus 11 percent. Branded wholesale sales surged almost 70 percent over the three years since the 2019 first quarter, helped by its acquisition of Togast, which had owned Levi’s footwear license.

This year’s first-quarter gross margin was 48.3 percent, up 50 basis points year over year and down 110 basis points compared to the first quarter of 2019. As a percentage of sales, the increase was due primarily to lower shipping and warehouse expenses due to lower e-commerce penetration, increased full-priced selling and price increases partially offset by the channel mix impact of increased wholesale sales and freight and logistics costs.

Selling and administrative expenses for the quarter this year increased 230 basis points as a percent of sales compared with last year and decreased 90 basis points compared to the first quarter of 2019.

Adjusted selling and administrative expense for the quarter this year increased 220 basis points as a percent of sales compared with last year and decreased by 120 basis points compared to the first quarter of 2019. The year-over-year increase is primarily due to a one-time benefit for rent credits and government tax relief in the year-ago quarter. In addition, increased selling salaries were partially offset by decreased performance-based compensation expenses.

“I’ve been describing the current fashion cycle as shifting away from fashion athletics more into casual, which plays into Journeys’ strength, positioning Journeys well among its athletic competition to deliver this assortment,” said Vaughn.

Casual continued its climb as a larger percentage of Journeys’ business in Q1, led by particular strength from some of the newer brands in Journeys mix. Both average selling price and average transaction size increased and price increase actions and strong full-price selling upheld last year’s healthy gross margin gains.

“The lack of inventory held back Journeys performance as we didn’t have enough winter product to fill late-season demand in February, and spring styles were slow in arriving due to supply chain disruption,” said Vaughn. “Case in point, we received 40 percent of our Q1 inventory in April, with much of that coming towards the latter part of the month.

While it was an uneven quarter in terms of monthly performance compared to both last year and pre-pandemic due to the combination of this, the stimulus offset and tax refund timing, the good news is that each of these headwinds lessened as the quarter progressed and sales were strongest in April, enabling Journeys to meet our profitability expectations for the quarter with momentum nicely picking up further in May. Importantly, Journeys is now in a considerably improved inventory position.”

Schuh Group’s Sales Climb 28 Percent
At Schuh Group, sales grew 28.3 percent to $88.2 million from $68.7 million. Sales on a currency-neutral basis were up 35 percent year over year and grew 14 percent against the pre-pandemic first quarter of 2019. The operating loss for the segment was reduced to $2.8 million from $3.8 million a year ago.

Having all stores open in the current period versus only 20 percent open in the year-ago quarter was the primary factor in Schuh’s growth. However, online held onto more than 60 percent of last year’s outsized gains to drive digital sales up over 110 percent compared to pre-pandemic levels.

Said Vaughn, “Like Journeys, Schuh’s strength is in its ability to deliver the fashion brands desired by its youth consumer, and Schuh similarly is capitalizing on the shift to casual, which is driving a larger portion of its sales. A big highlight of the spring selling season has been a strong consumer appetite for sandals ever since the weather turned warmer, and it was another quarter of strong full-price selling, which, along with lower promotional activity, fueled nice gross margin gains over the last two years. In addition, Schuh’s operating income gain this year was even more notable, factoring in last year’s significant COVID relief.”

“We are more and more excited about the potential of Johnston & Murphy as we reposition the brand for growth,” said Vaughn. “Our plan to reimagine J&M for a more casual, more comfortable post-pandemic environment continues to produce very positive results.”

Sales were almost on par with the first quarter of 2019 despite inventory levels ending roughly 30 percent below the comparable period and averaging even lower than during the quarter.

Q1’s healthy growth in casual athletic and casual propelled these categories to almost 80 percent of Johnson & Murphy’s footwear sales. Strong growth in apparel and other non-footwear categories has led to these categories expanding to about 40 percent of the total mix. Said Vaughn, “What’s most exciting is our success attracting younger customers to the brand with the under-35 customer base growing over 30 percent in the quarter.”

Said Vaughn, “The licensed brands’ team has completely remade this division since the start of the pandemic by adding attractive licenses and more robust product and sourcing capabilities through an acquisition we completed in late Fiscal ’20. Q1 results demonstrate the increased strength of our licensed portfolio and the team’s ability to capitalize on white space opportunities in the market.”

Guidance Unchanged
For the current quarter, the monthly sequential improvement seen through the first quarter has continued into May. The second quarter is a lower-volume quarter as Genesco’s core teen customer focuses on summer activities before returning to footwear buying for back-to-school selling in late July, noted Vaughn.

For the current year, Vaughn said the retailer continues to “feel positive about delivering top-line growth on top of a very strong” period in the prior year. She added, “We don’t anticipate the factors that led to such a strong full-price selling environment to continue at the same level, especially in light of current economic conditions, and we are working hard to overcome the cost pressures that are prevalent today and in certain areas increasing. We are planning the back half to be stronger than the first half as the stimulus comparisons wane, inventory levels improve, logistics cost pressure comparisons ease, and continued price actions help offset higher costs.”

Genesco reaffirmed its Fiscal 2023 full-year EPS guidance that calls for: