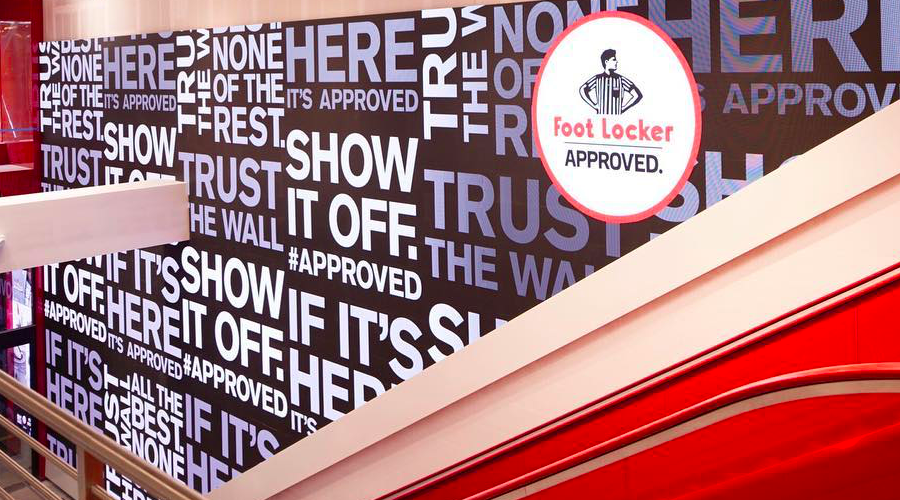 The quarter marked its 27th consecutive period of “meaningful sales and non-GAAP profit growth,” stated Dick Johnson, chairman and CEO, on a conference call with analysts. Johnson attributed the gains to the company being able to successfully navigate shifting trends this year from basketball to more athletic lifestyle offerings. It’s also benefitting from a resurgence at Adidas and Puma, largely in their more casual styles.

Overall, the CEO said a “crucial element” to the company’s consistent success has been its ability to remain at the “epicenter of sneaker culture.” Johnson also attributed the success to Foot Locker’s ability to work with vendors to remain on-trend, as well as its efforts to further differentiate each banner over the years to reach a unique customer base.

Said Johnson, “It is our own passion for sneakers and our understanding of these subtle differences that are key to our ability to maintain critical points of differentiation between our banners and from the competition.”

In the quarter, earnings excluding non-recurring items rose 13 percent to $1.13 a share from $1 a year ago. Results exceeded Wall Street’s consensus estimate of $1.11. Net earnings rose to $157 million, or $1.17 a share, from $80 million, or 57 cents, benefiting from a reduction in tax expense by $10 million, or 7 cents a share, due to higher goodwill value assessed to its European business. The tax break was partly offset by a pre-tax impairment charge of $6 million, or 3 cents a share, tied to its struggling Runners Point and Sidestep businesses. The year-ago period included a $100 million pension litigation charge.

Footwear Shines
Lauren Peters, EVP and CFO, said many of the trends seen earlier this year continued in the period. Footwear and apparel comps were both up mid single digits in the quarter, while accessories posted a low-single-digit decline. Women’s footwear jumped double digits on a comp basis, with the Adidas Superstar line “especially popular” with women across banners and geographies. Children’s footwear again performed well, up mid single digits, while men’s footwear comps finished up low single digits.

Across the footwear category, running and casual were both up in the high-single-digit range, while basketball was down slightly. Lifestyle running, led by Nike and Adidas, continued to be “very strong” while Stan Smith from Adidas, Vans Classics and Puma Suede Classics stood out in casual footwear. Within basketball, strength in court classic styles such as Adidas Superstars largely offset declines in performance shoes. Average selling prices in footwear were up at the low end of mid single digits, while units were also up low single digits. Store traffic in the U.S. was up, and comps in the store segment were up mid single digits.

By banners, the strongest comp performance was from 602, up “well into double digits,” said Peters. The women’s banners’ gains were driven by footwear with strong gains in Puma, Adidas and Nike. Foot Locker Canada also continued its recent momentum with a double-digit increase.

Strengths And Weaknesses
Adjusted earnings were helped by an improvement in gross margin rate to 33.9 percent of sales from 33.8 percent a year ago. The uptick was driven by merchandise margin, which also improved by 10 basis points due to lower markdowns in stores. SG&A expenses improved 20 basis points to 19.4 percent of sales despite higher marketing costs to support DTC.

Inventory was up 1.9 percent from a year ago and ahead 2.2 percent on a currency-neutral basis. Said Peters, “Our inventory remains fresh and exciting and we are well positioned for the important upcoming holiday season starting this weekend with this year’s addition of the week.”

Discussing some of the weaker parts of the business, Johnson said the poor performance by Runners Point and Sidestep partly reflected a challenging retail climate in Germany. However, a banner segmentation strategy set in place after the businesses were acquired in 2013 made incorrect assumptions about each banner’s customers. For instance, Runners Point’s mix shifted toward performance-oriented products and misjudged how many customers were coming to the banner for casual sneakers. Said Johnson, “We remain committed to the Runners Point and Sidestep businesses and believe we can get their performance back to the previous levels of profitability, which is the starting point for the ultimate goal of expanding those banners outside Germany.”

Eastbay, which focuses on the high school athlete, is being hurt by the shift in style preferences away from performance toward lifestyle assortment and is making adjustments to meet more of their target customer’s causal needs

On the positive side, Johnson noted that a number of trends continue to work in Foot Locker’s favor. These include the rebound in Adidas, evident in strength with both NMD and Superstars on the Originals side and with Pure Boost and Ultra Boost in performance. Puma is seeing renewed momentum, particularly in women’s. While limited to certain banners and geographies, Vans, Reebok, Asics and New Balance are all seeing “encouraging momentum.”

Nike, by far its largest vendor, is seeing “significant sales” in the lifestyle running categories with styles such as Roshe, Huarache, Presto and Air Max across regions. The Jordan brand “continues to build popularity around the world and there was also strength in seasonal boots from Nike.”

Overall, the boot business, led by Timberland, has “gotten off to a somewhat slower start” this year. In basketball, while signature basketball remains soft, healthy sales are coming from Nike’s Kyrie Irving model as well as the Curry 2.0 and 2.5 product from Under Armour.

Apparel is making progress at most of its banners with margins “close to catching up to the already strong footwear margins.” Average selling prices are up double digits due to a focus on premium assortments.