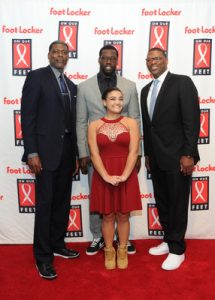 The Foot Locker Foundation joined together members of the athletic industry for its 17th annual “On Our Feet” fundraising gala.

The event, which took place on Tuesday, October 17 at New York City’s Pier Sixty at Chelsea Piers, benefited educational and other youth initiatives supported by the Foot Locker Foundation.

“As a company, we are committed to empowering t\oday’s youth through meaningful educational and sports initiatives,” said Dick Johnson, chairman and chief executive officer, Foot Locker, Inc. “We are proud that this signature event has become an important platform to support funding for programs such as The Foot Locker Scholar Athletes Program and our long-standing relationship with UNCF, allowing incredible student athletes the ability to attain higher education and become successful leaders.”

The Foot Locker Foundation, Inc. is the charitable arm of Foot Locker, Inc., a specialty athletic retailer that operates approximately 3,400 stores in 23 countries in North America, Europe, Australia and New Zealand. Over the years, the Foot Locker Foundation, Inc. has developed significant partnerships and programs to improve and enrich the educational, health and sports opportunities for young people across the country, and has awarded over 950 scholarships to outstanding students through all of its programs. In total, On Our Feet has raised more than $18 million since its inception.

Launched in 2011, the Foot Locker Scholar Athletes Program each year awards $20,000 college scholarships to 20 exceptional students who demonstrate academic excellence and exemplify strong leadership skills both in sports and within their communities. In addition, one of the 20 students selected will be awarded the Ken C. Hicks Scholarship in honor of the organization’s former Chairman and CEO, and will receive an additional $5,000 for exemplifying superior academic achievement, personal passion, and a true love of the game.

Students can apply online or be nominated by teachers, coaches, mentors, family or friends by visiting footlockerscholarathletes.com. Applications close December 15, 2017 at 5:00 p.m. (EST).