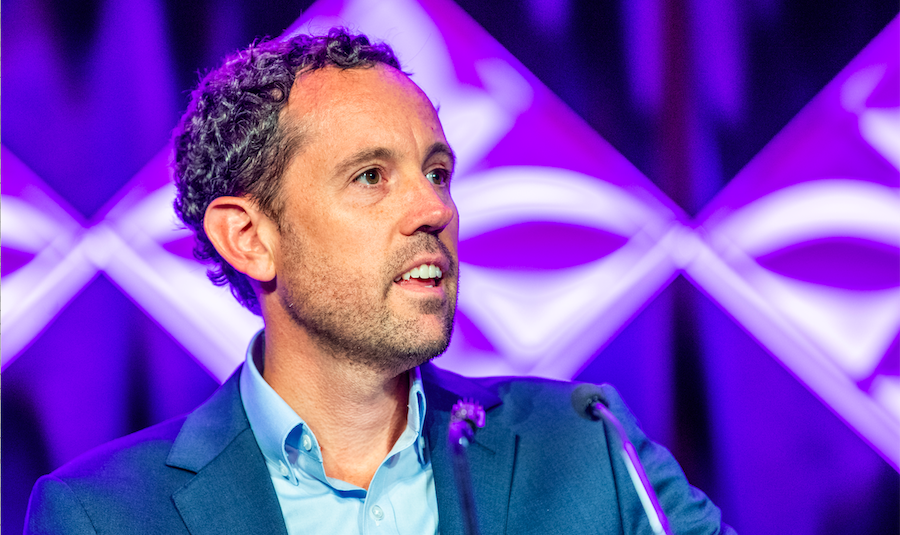 The overall message at Fleet Feet’s Annual Conference was again about the importance of people and culture. But the event’s signature theme shifted to “Lead” to signify the franchisor’s determination to lead the run specialty industry.

The “Lead” theme—shifting from “Let’s Go” and “All In” over the past two years, respectively—comes as Fleet Feet has solidified its position as the dominant run specialty retailer in the U.S. with 177 stores. JackRabbit, which had been threatening to consolidate the run specialty space, has significantly slowed its expansion pace since being acquired by a private-equity group in early 2017 and sits at only 62 locations.

In an interview at the conference held last week in Carlsbad, CA, Joey Pointer, Fleet Feet’s CEO and president, told SGB Executive that being the front runner presents new challenges for the franchisor and franchisees that go well beyond complacency.

“It’s really hard to lead,” said Pointer. “There’s no one in front of you. There’s no one setting the pace. No one for you to follow. It’s just you, and there are competitors nipping at your heels, and so the theme of our conference is we must continue to lead.”

Since Pointer took over as CEO in 2017, Fleet Feet has undergone significant changes rooted in people, culture, business development, the customer experience, national marketing, and innovation. The brand has introduced 3D foot scanning technology to all of its locations, driven customer engagement through the brand’s e-commerce site and digital media channels, added key roles to the senior leadership team, and undergone a complete brand refresh and logo update, all of which have helped support the company’s third year of growth in 2018.

“We broke every record last year from a digital and brick & mortar perspective, and we’re off to a very strong start this year,” said Pointer.

But even though the specialty run category has stabilized over the last two years, it’s far from the steady near double-digit growth seen earlier in the decade. Running race participation has dropped from its peak seen in 2013. And while the popularity of Orangetheory Fitness, SoulCycle and other fitness boutiques show people are still embracing healthy and active lifestyles, Fleet Feet stores face a new challenge of reaching scores of active consumers who don’t identify themselves first as runners.

“I think there’s still a lot of runway for us,” said Pointer. “There’s not too many places where you can come in and have a one-on-one consultation with someone about your unique foot shape and get recommendations for product. It’s unique in the retail environment. Even if you only walk the dog four days a week, you can still benefit from the right pair of shoes.”

At the conference, Fleet Feet set goals to lead in five areas broken down to “Five Cs”: Culture, Community, Collaboration, Customer and Change.

Culture has long been a mantra for Fleet Feet in connecting with runners and its importance is being increasingly called out across industries. Said Pointer, “I think it’s been diminished over time and it’s become like a buzzword that lost its meaning. But when you look at millennials and the next-generation workforce, they want to work for a brand that has a really strong culture. So it’s more important than ever that we double down on our culture.”

Pointer recently spent time with Sally Edwards, one of the co-founders, who talked about her vision of Fleet Feet as a clubhouse where runners discover products and aspire to become better versions of themselves.

“We still embody that,” said Pointer. “We’re bound by this simple core belief that running changes everything. The simple act of left foot, right foot, left foot, right foot, repeat can not only change a person’s life, but it can bring whole communities together, and I think as a society we need more of that.”

Internally, Fleet Feet is increasing efforts to recognize and reward its employees. At the conference, 12 employees across franchisees were recognized as part of the brand’s first Pacesetters award. The individuals went through a nomination process and the winners covered a wide range of positions, from general manager to retail experience manager, footwear buyer, back-room support, and training program coach.

Fleet Feet has also invested in more-expansive human resources tools to help with the job posting process and gives managers a better understanding of whether the candidate will be a strong cultural fit.

Fleet Feet further recently launched a mobile version of Fleet Feet University that lets associates, called Outfitters at Fleet Feet, view the brand’s Daily Huddles and other videos, such as content from vendors, to gain the most up-to-date information to better serve consumers. Fleet Feet is also seeking to ensure that commitment to customer service at the store level extends across the organization, including the distribution center. Said Pointer, “In general, it’s all about people.”

The second focus, Community, extends on that with its focus on bringing people together. Individually, Fleet Feet stores regularly unite local communities through pub runs, training programs, races, and other events but many step out. The Fleet Feet Burbank store, for instance, partnered with civic leaders on a youth running initiative while the brand’s Vacaville store in California launched a program that provides shoes and socks to local homeless shelters.

Increasingly, however, Fleet Feet is looking to bring those community activations to a national level and that’s demonstrated by the success of its third-annual The Big Run 5K event recently held on Global Running Day. In partnership with Brooks, the event on June 5 drew almost 20,000 runners across more than 100 cities.

A national marketing approach can also extend Fleet Feet’s reach to consumers. For instance, Pointer noted that on this year’s Global Running Day, one individual heard his friend participating in  The Big Run event with Fleet Feet Sacramento but he couldn’t get to Sacramento. He looked online and headed to the Fleet Feet in Folsom to complete his first 5K. Said Pointer, “That’s also part of building a brand. What you do may not have a direct impact in your community but you don’t know where the customer is going to land.”

Aimed at amplifying the national reach of its hyperlocal community focus, Fleet Feet revealed plans at the conference to launch its first philanthropic arm, called “Do The Run Thing.” Said Pointer, “When you look at the amount of shoes, dollars and time we donate, for us doing the right thing is doing the run thing.”

As part of the philanthropic effort, Fleet Feet will partner with Girls On The Run, the after-school program for pre-teens that promotes self-confidence and healthy lifestyles. More specifically, Fleet Feet will become the main sponsor of the organization’s SoleMates program, which provides people in the community an opportunity to raise money for Girls on the Run while completing a physical challenge.

Collaboration, the third area to lead, is aimed at Fleet Feet working with brand partners, especially vendors, in coming up with innovative products, fresh approaches to outreach and other ways to create a better customer experience.

One way Fleet Feet is collaborating is around exclusivity, including partnering with its U.S. exclusive in-house brand Karhu last September on the launch of the Ikoni, the first running shoe constructed from the data points of over 100,000 customer 3D foot scans. Fleet Feet has also partnered with Superfeet on an exclusive insole; brought in Tracksmith, a niche running apparel brand, on a limited range; and partnered with Brooks and Asics on exclusive apparel collections and SMUs (special make-ups) in footwear. Said Pointer, “I think there’s that balance where we want to have the best innovations from Asics, New Balance, Brooks, Saucony, Nike, and all the others, but we also want to have some things that make us more special and create something that’s unique for our customers.”

A newer, collaboration test is one with one unnamed footwear vendor that enables items bought on the vendor’s website to be returned to a Fleet Feet store. Said Pointer, “The customer’s able to bring it back to a Fleet Feet store that’s maybe two miles away and then they’ll also be able to seamlessly try on other sizes and gain some one-on-one expertise. So it’s an overall better customer experience.”

The fourth C, Customer, talks about the need to continue to evolve the store experience for today’s mobile-first consumer. Said Pointer, “When the bar’s raised, whether by Amazon or a local grocery store, it gets raised for everybody.”

Fleet Feet has looked to elevate the store experience through its 3D foot scanners, a tool that outputs measurements that store associates use to better personalize solutions for customers based on their specific needs. The franchise earlier this year celebrated the scanning of its one-millionth pair of feet since launching 3D scanning in-store in 2017, a milestone that came as Road Runner Sports, New Balance, Nike, Stride Rite, and others were earning press for launching their first steps into digitizing the footwear fitting practice.

A second step to further engage the customer is the launch of a new app this January that unified and further activated Fleet Feet’s rewards efforts. Customers are rewarded “miles” for showing up for a pub run, posting about Fleet Feet on social media and their physical miles based on links to their Strava or Garmin accounts. The “miles” can be redeemed for freebies such as Fleet Feet hats, stickers or mugs or a chance to win entry to sold-out races such as the London Marathon or the Western States.

Pointer said local stores are able to offer rewards to local businesses, such as free classes to the nearby Orangetheory Fitness, but also benefit from the national scope. Said Pointer, “Our success is grounded in hyperlocal activation, and now we have the opportunity to do it at scale.”

Finally, the last C is the need to embrace Change.

Fleet Feet expects to open 15 new stores this year to close the year with 186. Of the base, 30 are expected to be company-owned and the remaining 156 franchised. Five of Fleet Feet’s company-owned stores will be acquired by employees through a program that sets up employees on the path to ownership.

“That’s one of our programs I’m most proud of,” said Pointer. “People who have worked hard for the brand and have been loyal employees now get to be small business owners. That’s a pretty powerful and rewarding thing.”

As far as plans, Pointer said a major aim this year is refining the numerous initiatives undertaken over the last two years. He said, “We need to figure out best practices and work on how we bring these to life in bigger and better ways.”

Pointer ended his presentation to franchisees with the phrase, “May you live in interesting times,” a translation of a proverb that some also view as a curse. But the message was the ongoing disruption across retail and in the run specialty space that offers opportunities to act boldly.

Said Pointer, “We live in interesting times, and it’s in those interesting times where you can lead, be bold, and be more creative than ever before. I think that leaders are driven by that; they don’t want to follow anybody. They want to set their own course. They want to go at their own pace and not have to worry about beating someone in front of them. I think we can just be more bold and more creative in our actions.”