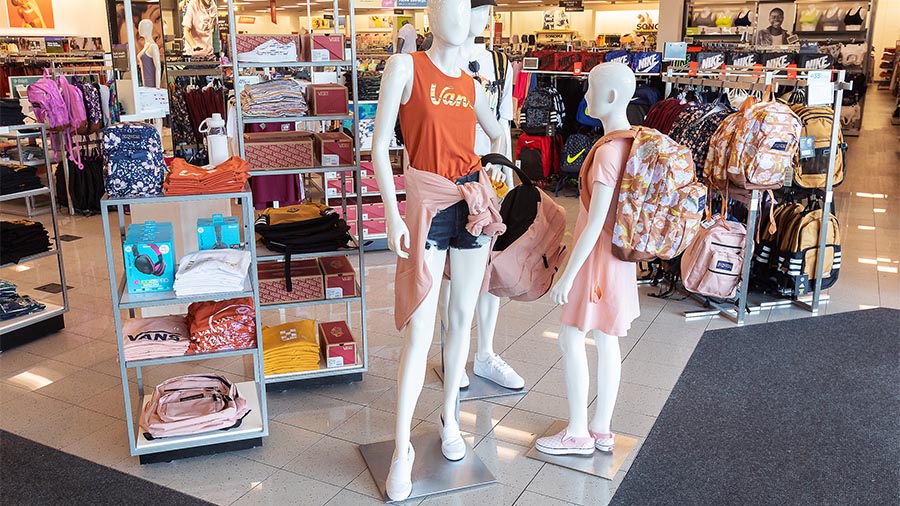 Kohl’s, Inc. significantly reduced its guidance for the year due to expectations of lower sales and escalating promotional activity. The department store chain also said athleisure and outdoor posted strong sales but the overall active underperformed in the second quarter.

Kohl’s has been significantly investing in its active offerings in recent years, including adding Under Armour in 2018, launching an Eddie Bauer collection last year, increasing depth in key brands, including Nike, Adidas and Columbia, and expanding dedicated space to active inside its stores. Gass stressed to analysts Thursday that active remains a “key component” to Kohl’s positioning as the leading destination for the active and casual lifestyle despite the second-quarter shortfall.

“In recent years, we have invested significantly in strengthening our product offering, elevating our merchandising and expanding dedicated space to active in our stores,” said Gass. “These efforts drove strong growth in active sales, including more than 40 percent growth in 2021 and increasing it to 24 percent of our total sales from just 14 percent five years ago.”

In October 2020, Kohl’s set a goal to expand active assortments to at least 30 percent of sales from 20 percent of sales. Toward that end, Kohl’s announced Tuesday that it was expanding its outdoor brands to more stores this fall, including Eddie Bauer, Under Armour Outdoor and Columbia’s PSG collection. Gass noted that the expansion comes as key national brands, citing Eddie Bauer and Columbia, continuing to be a “strong growth contributor” in its men’s offerings.

Guidance Slashed
The big operational news was Kohl’s plans to expand its successful in-store Sephora shops in all of its 1,165 stores, although that was overshadowed by the move to reduce guidance for the year significantly.

The updated 2022 outlook calls for the following:

“Since our last earnings call in May, as all of you know, a weakening macro environment, high inflation and dampened consumer spending are having broad implications across much of retail, especially in discretionary categories like apparel,” Gass told analysts. “Given our penetration in these categories, this is disproportionately impacting Kohl’s. Our second quarter results reflect a middle-income customer that has become more cost-conscious and is feeling greater pressure on their budgets. Therefore, we are seeing customers make fewer shopping trips, spend less per transaction and shift towards our value-oriented private brands.”

She said Kohl’s had responded by increasing promotions, aggressively clearing excess inventory and pulling back on receipts.

“We acknowledge that many others are taking similar actions will likely make for a more promotional environment in the near term,” added Gass. “Our updated guidance contemplates lower sales and margin pressure from a more difficult economic backdrop and a more competitive landscape.”

Second-Quarter Sales Decline 8.1 Percent
In the second quarter, which ended July 30, sales fell 8.1 percent to $4.08 billion, just above Wall Street’s consensus estimate of $3.95 billion. Second-quarter comparable sales decreased by 7.7 percent. Lower store traffic and smaller basket sizes were the primary drivers of the decline. Although the average ticket increased, it was less than historical as customers shifted towards opening price point private brands.

SG&A expenses grew 3.4 percent to $1.28 billion from $1.24 billion and increased as a percent of sales to 31.4 percent from 27.9 percent. The higher spend reflected $36 million in incremental spend year over to add Sephora in-store shops and support store refurbishments.

Kohl’s also incurred $9 million of expenses related to its strategic review process. Kohl’s had initiated a sales process earlier this year after being pressured by activist investors. By early July, buyout negotiations and the sales process ended due in large part to the macroeconomic environment and market volatility. Higher wages and transportation costs also increased operating expenses in the latest second quarter.

Elaborating on the sales performance in the quarter, Gass said Kohl’s saw a benefit early in the quarter from seasonal spring selling, but “it became increasingly clear that inflationary pressures were beginning to impact our customers’ spending, especially our middle-income customers.”

June was the “most challenging month,” and promotions were taken in July to improve demand.

From a channel perspective, digital sales were flat last year. Online selling benefited from higher conversion rates, mainly driven by its reduced free-shipping threshold to $49 from $75 to be more competitive. Kohl’s app accounted for 40 percent of digital sales in the quarter, doubling in penetration in recent years. In total, digital accounted for 28 percent of sales, up from 26 percent last year.

Private brands outperformed national brands for the second consecutive quarter. Gass said, “This is another indication of our ability to fill the needs of our customers looking for greater value during this time.”

Sephora In-Store Shops Provide Sales Lift
A bright spot in the quarter was its partnership with Sephora. The 200 Sephora in-store shops opened last year have maintained a high-single-digit percent lift relative to the balance of the chain. In the 400 stores that have added Sephora in-store shops this year, a mid-single-digit percent sales lift, consistent with the initial performance in the first 200 stores, is being seen.

“We have acquired more than one million new customers since launching last August, which is encouraging given that this occurred in less than half of our fleet, many of which had just opened for a very short period of time,” said Gass. “The new customers are younger and more diverse, and they shop more frequently than our average customer.”

Kohl’s is also expanding its Sephora partnership in other ways, including starting this September to accept any Sephora gift card regardless of where customers bought it. An expanded holiday gifting assortment focused on beauty is expected to be a “big traffic driver” for the fourth quarter.

Said Gass, “We are excited about all that is ahead for Sephora and the impact this partnership will have on our business. As a reminder, we’re just completing the build-out of this year’s 400 stores. The vast majority of Sephora’s business impact is still in front of us.”

Among other categories outside active and beauty, women’s slightly outpaced Kohl’s average with strength in areas it had invested over the past 18 months, including continued momentum in dresses and strength in “more elevated casual offerings,” such as work wear and growth in key private brands of Nine West, Simply Vera Vera Wang, Lauren Conrad, and Sonoma.

Overall, women’s declined primarily due to weakness in juniors tied to fashion miscues that were adjusted. Juniors departments were also moved in the 400 stores that added Sephora in-store shops, and the category’s performance is expected to improve in those stores as shoppers become accustomed to the updated layout.

Home and children’s both underperformed as the home category continues to normalize following strong demand earlier in the pandemic. In children’s, declines occurred across tweens, boys and girls departments due to softness in seasonal classifications and basics, as well as in toys and sleepwear, which were up against solid growth comparisons.

Inventories Jump 48 Percent
Inventories ended up the quarter ahead 48 percent year-over-year. Kohl’s CFO Jill Timm said the increase was driven by lower-than-expected sales in the second quarter, along with three unique factors.

Excluding the three factors, inventory would have increased 27 percent to 2021 and decreased 8 percent to 2019 levels. Timm said, “We’ve taken action to address inventory, including increasing promotions, being aggressive on clearing excess inventory and pulling back on receipts.”

Looking ahead, Gass said overall back-to-school trends are in line with expectations. She added, “As it relates to the back-to-school season, we are focused on delivering compelling value across key categories. We’re supporting this with promotional events and more targeted offers.”

Elaborating on the outlook, Timm said that while overall sales are expected to “remain soft given the challenging economic backdrop,” Sephora in-store shops are expected to continue to contribute incrementally to growth.

Gross margins in the second half are expected to be similar to the second-quarter gross margin performance, driven by product cost inflation, an increased promotional environment and elevated freight costs.

SG&A expense is projected to increase approximately 1.5 percent this year and benefit from lapping last year’s Sephora rollout expenses and the lack of holiday-based retention incentives this year

“2022 has turned out to be very different than we anticipated,” said Gass. “The weakening economic backdrop and inflationary pressures have created headwinds for our customers, our industry and our business. We are leveraging our agility and responding with the customer at the center of our focus. Kohl’s has navigated many difficult periods in the past, and we’re confident we will successfully manage through this dynamic period as well.”