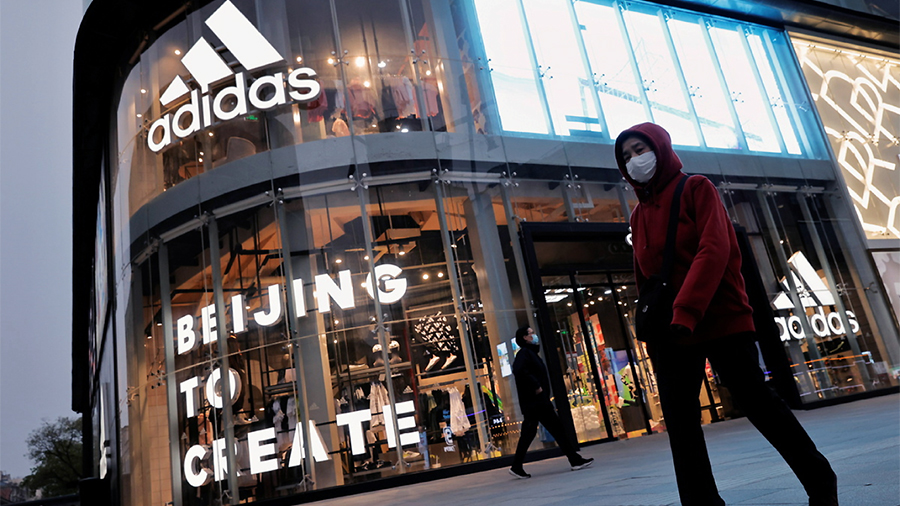 Adidas lowered its expectations for 2022 after a first-quarter slump as renewed COVID-related lockdowns worsened trends in Greater China. Sales declined 35 percent in the region in the quarter, and Adidas officials now expect sales to decline “significantly” in the key country this year.

Adidas’ updated guidance calls for currency-neutral revenues to come in at the lower end of its previously-forecasted growth range between 11 percent and 13 percent due to the severe impact of COVID-related lockdowns in China. Consequently, net income is also forecasted to reach the lower end of the previously communicated range of between €1.8 billion and €1.9 billion.

“The reality is that we are operating in a very dynamic environment with heightened uncertainty,” said Adidas CEO Kasper Rorsted on a call with analysts. “The devastating war in Ukraine, a continued challenging market environment in Greater China, COVID-19 political restrictions in the east, supply chain challenges and inflationary pressure have impacted first-quarter results, and they will continue to be leaving their mark on our business in 2022. Against this current negative industry backdrop, we remain committed to focus on the things we can control, actively managing our growth levels to drive top-line expansion and market share gains, all with the consumer at the heart of everything we do.”

The downwardly-revised outlook comes despite Adidas continuing to see double-digit growth in Western markets in the first quarter despite supply constraints that particularly affected sales in EMEA and North America. Indeed, the original growth targets for 2022 for EMEA (mid-teens growth), North America, Latin America (both mid-to-high-teens growth), and Asia-Pacific (mid-teens growth), which combined represent more than 80 percent of the company’s business, were confirmed and supported by strong order bookings.

However, overall sales in the first quarter were down 3 percent on a currency-neutral basis due to both supply and demand challenges. While Adidas continued to experience strong demand in all Western markets, supply chain constraints, as a result of last year’s lockdowns in Vietnam, reduced top-line growth by around €400 million in the first quarter.

Adidas had previously predicted its EMEA, North America and Latin America markets would be impacted by $600 million in inventory shortages due to logistics constraints. Adidas also noted that COVID-related lockdowns in Greater China and Asia-Pacific continued to weigh on growth. In euro terms, revenues inched up 0.6 percent to €5.3 billion ($5.6 bn).

From a regional perspective, sales continued to differ significantly between Western and Eastern markets. Despite supply chain constraints limiting growth by around €400 million, currency-neutral revenues in all Western markets combined increased by 13 percent during the quarter with double-digit increases in North America, up 13 percent; and Latin America, climbing 38 percent. Excluding the impact of the COVID-related shutdowns of factories in Vietnam last year, growth would have been 24 percent in North America.

Sales in EMEA were most impacted by the supply shortages with more than half of the total negative impact recorded in this market. Nevertheless, EMEA’s revenues grew at a high-single-digit rate, up 9 percent. Excluding the Vietnam impact, EMEA’s sales would have been up 20 percent.

In the East, the company continued to face a challenging market environment in Greater China, amplified by COVID-related lockdowns across both regions. As a result, revenues in Greater China decreased 35 percent also due to strong prior-year comparables and 16 percent in Asia-Pacific.

As previously stated, Adidas has prioritized its DTC channels in light of the supply shortages. DTC revenues increased 1 percent in the first quarter versus the prior year, reflecting a 33 percent increase compared to the 2020 level. North America’s DTC sales grew more than 20 percent. EMEA’s DTC was also up double-digits, driven by more than 50 percent growth in owned retail.

E-commerce revenues increased 2 percent during the quarter, reflecting high growth in the prior-year period. Compared to 2020, e-commerce revenues grew 50 percent in the first quarter. E-commerce’s performance was led by growth in the North America region, which also achieved its lowest level of markdowns ever for the quarter and help lift e-commerce’s global full-price share by 11 percentage points.

From a category perspective, growth was strongest in its strategic growth categories Football and Outdoor, which both grew double-digits. Football was helped by the latest iterations of key footwear franchises and the launch of the World Cup match ball.

In addition, sales in Running increased at a high-single-digit rate driven by strong sell-through of its latest product releases, including UltraBoost 22 and AdiStar as well as the broadening of the Solar franchise with the introduction of SolarGlide. In its lifestyle segment, new product drops helped drive strong double-digit growth in Yeezy.

Adidas’ gross margin in the first quarter was down 1.9 percentage points to 49.9 percent. This decrease was mainly driven by a significant increase in sourcing and freight costs. In addition, the negative impact of a less favorable market mix and tough prior-year comparables in e-commerce weighed on gross margins. These headwinds were only partly offset by a significantly higher share of full-price sales and selective price increases, mainly on DTC exclusive products.

Operating profit amounted to €437 million, down 37.9 percent. Operating margins erode to 8.2 percent from 13.4 percent a year ago.

Looking ahead, growth on the lower end of its 11-to-13 percent range for the current year is expected to be driven by momentum in all Western markets and the return to double-digit growth in the company’s Asia-Pacific region than expected to compensate for the significant decline predicted for China.

Adidas expects to return to growth in the second quarter despite a continued sales decline in Greater China and around €200 million negative impact from supply chain constraints. In the second half of the year, net sales are expected to grow more than 20 percent driven by unconstrained supply combined with strong momentum in Western markets, accelerated demand in Asia-Pacific, a pipeline of products, and major sporting events.

Because of the less favorable market mix due to lower-than-expected revenues in Greater China, Adidas’ gross margin is now expected to be around the prior year’s level of 50.7 percent in 2022 (previously: between 51.5 percent and 52.0 percent). As Adidas continues to invest in the brand, its products DTC and digital to support double-digit growth in all other markets in 2022 and long-term market share gains worldwide, the company also expects its operating margin to come in at around the prior year’s level of 9.4 percent (previously: between 10.5 percent and 11.0 percent).

Rorsted stated, “While we will remain agile, we will not jeopardize our long-term growth opportunity for short-term profit optimization. We will continue to invest into our brand and partnerships, into our DTC business and digital capabilities to support top-line acceleration and market share gains in our growth markets in 2022.”