Easton Sports announced a partnership wherein Easton will become an official equipment supplier of the Central Hockey League (CHL) during the 2010-2011 season.

“We are extremely excited about Easton's involvement and thrilled to be working with them,” said Duane Lewis, Commissioner for the CHL. “Easton is always at the cutting edge of technology when it comes to hockey gear, and that's crucial.”

“It is evident from watching hockey at all levels, from the NHL to the Olympics to games at local rinks, that Easton has become the premier hockey brand,” said Ned Goldsmith, Senior Vice President of Easton Hockey. “We look forward to expanding this relationship throughout the season and watching the CHL continue to grow in popularity.”

The arrangement will go into effect after the conclusion of the 2009-2010 season and the products will be on the ice from the drop of the opening puck of the 2010-2011 season.

The CHL recently completed its 18th season with the culmination of crowning the Rapid City Rush the 2010 Ray Miron Presidents' Cup Champions.  The league consists of 15 active member teams across nine states.  The CHL saw close to two million fans attend games in each of the last two seasons and has regularly been the North American professional 'AA' hockey league leader in average attendance. 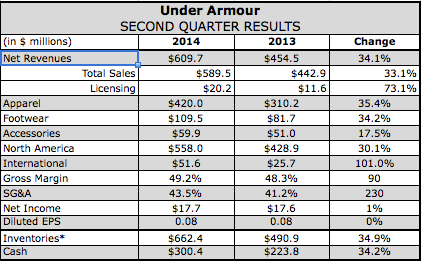 Under Armour’s Momentum Continues in Q2