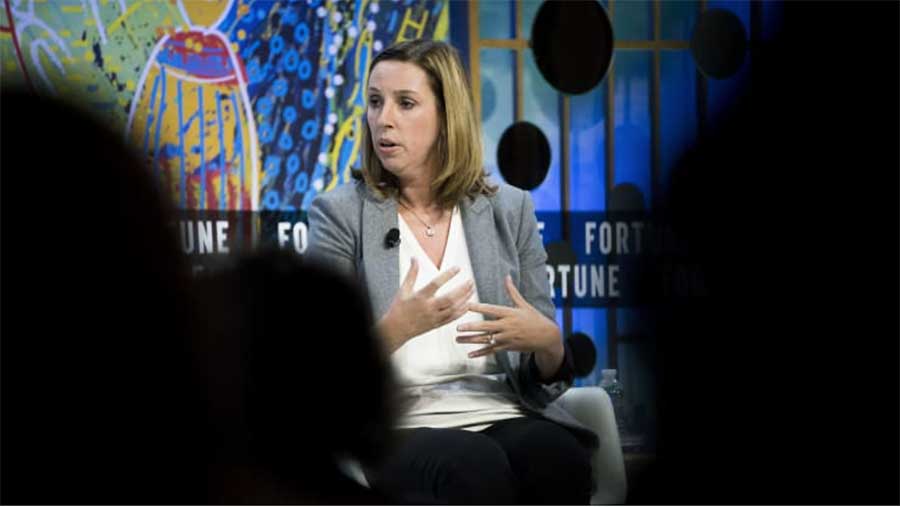 At CNBC’s Evolve Global Summit, Lauren Hobart, CEO of Dick’s Sporting Goods, shown above, said she believes that consumers have permanently embraced active apparel and outdoor hobbies due to the pandemic. However, she also elaborated on the supply chain hurdles the chain faces catching up to that newfound demand.

“They never cease to amaze me,” Hobart said of the continued supply change challenges in an interview with CNBC’s Becky Quick. “The challenges that we’ve had, the whole world has had, right? So this is not a Dick’s specific thing, but it just keeps going where we think we’ve got things back in stock and under control, and then, there are new issues, some challenges in Vietnam right now, and a few other places…If I were to say we have any sort of an attack team out still working on pandemic-related issues, it would be supply chain.”

Nonetheless, she noted that for the most part, Dick’s team has been able to chase down enough inventory to drive the retailer’s record same-store gains over the last four quarters. She added, “It’s been a challenging year to keep in stock, but we’ve gotten good at managing and trying to chase things and trying to provide people with what they need.

On May 26, Dick’s significantly hiked its guidance for 2021 as stellar first-quarter results provided more confidence that the surge seen across many categories during the pandemic would continue, and categories such as team sports saw a strong comeback.

The quarter saw a same-store gain of 115 percent year-over-year, driven by a nearly 190 percent increase in same-store sales at its brick and mortar stores as stores were closed for about half of the time in the prior-year period. However, compared to 2019, brick and mortar comps increased 40 percent on roughly the same square footage, underscoring the overall momentum across the business.

“We managed through all of last year to drive these comps with the inventory being constrained as it was,” said Hobart. “So, we’ve developed, I think, a pretty good muscle at this, so it keeps me up, but not for very long at night.”

Asked how Dick’s has been able to manage the supply chain challenges, Hobart said it’s “a multi-pronged cross-functional effort.” She said the retailer’s partnership with FedEx that supports quicker delivery has been “super helpful.” However, the chain has also been working closely with vendor partners to help speed up delivery that may be held up ports or travel.

“We will take truckloads, and we do not require them to stop and be disbursed to different distribution centers for us,” said Hobart. “We will pick up product wherever it is. We will airship products if it needs to happen and if it makes economic sense. So there are levers in our toolkit that we can use when things go wrong. And we have been helpful to our brand partners in that way by being very flexible.

Another example is oftentimes is that they are supposed to send things neatly hung and on hangers. We will take all that work off of our plates. If we can just get product, we will pick it up. So, we have become very adept at this.”

The CEO discussed Dick’s initial shift to “preservation mode” in the early days of the pandemic as the chain was closed on average eight weeks across the chain. The retailer eventually had to furlough most of its staff but continued to provide health insurance. Hobart said the decision to continue to cover insurance “ended up being something that has improved morale in some ways. The family dynamic that we have here is pretty special.”

Hustling to get employees back to work quickly became an internal “mission,” according to Hobart. With nearly all its inventory locked behind closed doors, the chain could add curbside pickup in 48 hours. The retailer’s roadmap had called for curbside pickup to be rolled out over an 18-month period.

“Another lesson we learned from the pandemic is that when you have a burning platform, you can move mountains,” said Hobart. “And a lot about how we want to save and keep some of that scrappiness that we got. We use the term ‘scrappy’ a lot at Dick’s.”

As stores began opening amid social distancing calls, Dick’s saw sales take off as people embraced being active and outdoors.

She said, “We first saw it in the golf business. The golf business started taking off and has not slowed down since. The first activity you could really do outside, which was great. But biking. You probably saw people walking and running in your neighborhood more than you ever have before, and then home fitness became a huge, huge business. People were trying to build home gyms. You couldn’t go out anymore. So it was this really neat motion that the whole country had towards being outside and being active. And so our business started to respond to that.”

Asked how much of the recent strength is due to stimulus checks, pent-up demand as activities like team sports returns and more people embrace active and outdoor lifestyles coming out of the pandemic, Hobart said, “I wish I could apply percents to all of those things, but I think they’re all somewhat true. I mean, we definitely saw an impact of the stimulus checks, and people were out buying. We saw an impact of team sports coming back and some pent-up demand there. But the businesses that were surging during the heart of the pandemic, so the outdoor businesses, golf and outdoor, lifestyle, biking, they have not slowed down.’

She added., “So I actually do think people have fundamentally changed their lifestyle. People will certainly go back and take vacations, there may be less discretionary income in the market, but I think there’s been a permanent shift towards outdoor living and active living. And also athletic apparel. I mean, people are wearing, you know, athletic apparel now to the office. So it’s just ongoing. I do believe that this will continue. And we’re certainly going to do everything we can to, quote-unquote, comp the comp.”

Among other topics, Hobart addressed moves by Nike and other vendors to shift direct-to-consumer.

“All of the brands have a direct-to-consumer strategy, which makes sense for them,” said Hobart. “So it’s somewhat similar to how we have what we call our vertical brands. It used to be our private brands, but our vertical brand strategy where we also need to diversify. And so we have got products in the stores, like Calia, and this new VRST line that are really attractive to consumers, as well. But our partnerships with the Nikes of the world are at an all-time high in terms of the fact they are actually trying to narrow their distribution. They have been pretty public about that and really placed bets with partners who are going to bring their brand to life in the best way possible. And we have a very, very strong relationship, and so I do think this actually does open up some market share for us, even though DTC will be growing, I think it’s actually a win for Dick’s, as well.”

She also said she believes Dick’s corporate and in-store teams have been “energized” by Dicks’ recent success and the strengthening trend towards active and outdoor lifestyles. She said, “If you go into any of our stores right now, you will feel it. I really do feel like there’s a different level of service and engagement and energy and so, you know, it’s nice to be on a winning team. And so the team’s energized.”