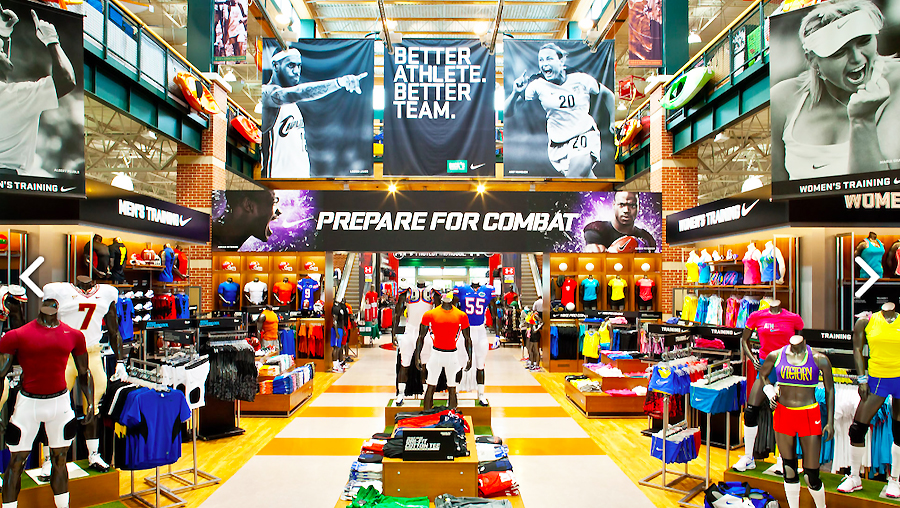 Dick’s Sporting Goods Inc. raised its full-year outlook while reporting its strongest quarterly comp gain since 2016. The performance was in large part tied to a 19.0 percent hike in inventory levels. Dick’s officials indicated other newer strategies—including increasing space to faster-growing categories, forming closer partnerships with key vendors and differentiated marketing— are also starting to pay off.

In the Q&A session on a conference call with analysts, a few of the questions focused on the higher inventories and the related margin risk if markdowns will be required to handle slow sellers.

Ed Stack, chairman and CEO, noted that the planned ramp-up in inventory investments “in key growth categories” was discussed in the company’s first-quarter conference call as officials recognized 2018 inventories had become “too lean” and some sales opportunities were missed.

“Through this investment, we’ve improved in-stock levels and are able to showcase key items in a very impactful way,” said Stack. “Our athletes [customers] have responded positively to these changes, and we expect to continue to deliver positive comps throughout the second half of the year.”

Addressing markdown risk from elevated inventory levels, Stack noted that on a two-year stack basis, inventories are up 8 percent. He also feels that the markdown risk should be low because the extra buys are focused on categories seeing healthy growth, citing footwear, apparel, baseball, and golf. “We’re not very worried about markdowns,” said Stack.

Other key highlights of the quarter included:

In the quarter ended August 3, net earnings slid 5.8 percent to $112.5 million from $119.4 million. On a per-share basis, however, earnings rose to $1.26 from share, from $1.20, a year ago and topped Wall Street’s consensus estimate of $1.21. The EPS growth versus the net earnings decline reflects a lower share count due to aggressive stock buybacks. Net sales for the quarter increased 3.8 percent to $2.26 billion, just ahead of Wall Street’s consensus estimate of $2.2 billion.

The gain marked a return to positive comp growth at Dick’s brick & mortar stores and was the strongest since the fourth quarter of 2016 when comps rose 5.0 percent. Adjusted for a calendar shift, comps were down 4.0 percent in the 2018 second quarter.

Comp growth has been held back by Dick’s decision following the mass shooting at a Parkland, FL, high school to stop selling assault-style weapons as well as any weapon to consumers younger than 21 years old. Other factors pressuring comp growth include its exit from the electronics category and a move started in 2017 to rationalize its vendor base. Said Stack on the call, “Our major headwinds are behind us and we’ve bent the curve on sales.”

Growth was seen across each of its three primary categories—hardlines, apparel and footwear. As expected, the decline in comps in the hunt category moderated.

Stack said Dick’s continues to benefit from the reallocation of floor space to growing categories, particularly footwear and apparel.

Stack noted that the company’s business with strategic partners, including Nike, Adidas, Under Armour, North Face, and Callaway, remained “very strong.” He said, “These brands continue to invest in our business through in-store shops, marketing programs and improved access to premium and differentiated product. Working together, we have elevated our assortment and renewed our focus on the enthusiast athlete, allowing us to better serve all athletes.”

Private brands, which accounted for 14 percent company sales in 2018, again saw growth that outperformed the average, led by Calia, Walter Hagen and Alpine Design. Late in the quarter, DSG, a value-oriented, performance apparel line, was launched and is “off to a great start,” according to Stack. DSG replaces Reebok, which Dick’s had an exclusive on in the athletic channel.

Also helping drive growth was the expansion of HitTrax to another 20 stores, bringing the batting-cage experience of 170 of its 727 locations. The HitTrax expansion, deeper assortments, and improved integration of its GameChanger app helped drive “meaningful comps” in baseball. Golf was stood out as a strong performer among hardlines.

On the hunt category, Stack noted that late in the third quarter last year the category was removed from 10 underperforming Dick’s doors and replaced with a “more compelling localized assortment.” Those 10 stores generated their third consecutive quarter of comp positive growth and outperformed the balance of the chain.

As announced in the first-quarter conference call, hunt was removed from another 125 stores in the second quarter and replaced by categories seeing growth. Said the CEO, “While it’s too early to discuss performance, we’re optimistic these changes will better serve our athletes and these communities and generate positive results.”

He said the company was continuing to review of the hunt category, including the Field & Stream chain, but said no decisions have been made. Some news outlets believed Dick’s was set to make a major announcement on the category with several stories in recent days detailing Dick’s review.

Gross margins reached 29.9 percent of sales in the quarter, a 31 basis point year-over-year decline. Merchandising margins decreased 65 basis point. Lee Belitsky, CFO, said the company was “pleased” with the merchandise margin performance given the ongoing clearance of hunt merchandise from 125 stores as well as clearance of Reebok apparel. Added Belitsky, “Our inventory is in good shape, and we expect our year over year merchandise margin performance will sequentially improve in the second half of the year.”

Margins were also impacted by higher shipping and fulfillment costs due to e-commerce growth. Belitsky said that while the gross margin rate of its e-commerce business is lower than its stores, SG&A expenses are lower as well and the company overall is “very pleased with the overall profitability of this channel.”

SG&A expenses were 23.6 percent of sales, up 31 basis points and slightly better than expected. The higher rate reflects ongoing growth investments as well as inflationary headwinds from increasing hourly-rate wages. Belitsky said the company remains on track to achieve its 2019 productivity objective of eliminating approximately $30 million of expenses.

On the call, Lauren Hobart, president, addressed some key investments, including the rollout in late April of “new service standards” for its in-store associates that are believed to be improving conversion rates and helped drive the return to positive brick & mortar comps during the quarter. She said in-store associates are embracing the program with many enthusiastically calling out benefits on LinkedIn.

Hobart said the company remains “in early innings” in terms of improvement in-store service levels. She said, “This is some degree a new muscle for us and we are going to be continuing our training, and our focus on athletes and our focus on service and we think there’s a lot of headroom here.”

The 21 percent online growth brought total online sales to 12 percent of overall sales in the quarter, up from 11 percent in the same period last year. Later this year, Dick’s will launch new responsive websites across mobile, tablet and desktop. Two dedicated e-commerce fulfillment centers opened earlier this week in New York and California and a strategic delivery partnership was recently formed with FedEx to support the fulfillment of online orders. Delivery times are expected to be reduced to nearly one day in many cases.

The Scorecard rewards program remains “a tremendous asset,” according to Hobart, with more than 20 million active users who account for over 70 percent of sales. In October, a gold tier will be launched for those spending at least $500 annually or owning a Dick’s credit card.

Hobart also noted the retailer and its foundation last month pledged to provide access to sports for 1 million additional young athletes nationwide by 2024 as part of its Sports Matter program. Dick’s will match up to a million dollars in donations made by customers as part of the new initiative. Since launching in in 2014, Sports Matter has impacted more than 1 million young athletes across the country,

Asked about the sale of Blue Sombrero and Affinity Sports in the Q&A session, Hobart said the company found over the last few years that “we did not have to own and operate those businesses specifically to be able to extract the value from them.”

Dick’s will keep the GameChanger part of the Team Sport HQ business that links directly to consumers. The company also entered a long-term strategic partnership to become the official retailer of Stack Sports. The partnership includes data sharing. Hobart said, “We see this as a real win-win in the ability to deliver that same strategy that we indicated a few years ago.”

Dick’s expects the sale to result in a one-time gain to be determined later in the third quarter that’s not yet incorporated into full-year guidance.

The tariff tranches that are set to become effective on September 1 and December 15 are incorporated in guidance.

Dick’s said it has purchase orders written across the impacted apparel items and most of its affected hardlines categories for the rest of the year. Belitsky said the combination of inventory on hand and purchase orders should lead to a “relatively minor impact” from tariffs in the second half. For 2020, Dick’s isn’t providing guidance given a wide range of mitigation options available, including sourcing changes and further negotiations with vendors.

Stack was optimistic that the impact would remain minimal. He said, “We’ve worked with a number of vendors, even going into the spring of next year and into the second quarter of next year, and I can tell you that we were pleasantly surprised at the lack of meaningful price increases so I don’t really think this is going to be a huge. We’re not seeing anything really significant so far.”

On inventories, Stack said the inventory investments were “extremely helpful” to Q2 top-line growth. The retailer, he said, is “in a much better in-stock position” across apparel and footwear, as well as baseball and golf on the hardlines side. Year-over-year inventory growth will remain elevated in the third and fourth quarter and slightly elevated in the first quarter of 2020 but an additional level of inventory investments isn’t being made. Said Stack, “We don’t need to invest in any more inventory.”

Asked about the test of Dick’s Sporting Goods Clearance Outlets, Stack said the company was only testing the off-price model with “a couple” locations to “understand how to clear inventory to kind of mitigate some of the markdowns we have and it’s way too early in the cycle to have really any comments on it.”

As reported, the Racine Journal Times reported that Dick’s has transformed three of its stores into Dick’s Sporting Goods Clearance Outlets since May with a particular focus on footwear and apparel.

Positive Comps Expected For Back Half

On growth, Dick’s officials were asked why they were only expecting low-single-digit growth for the year despite the strong inventory position and strength in key categories.

Stack said the second-half faces some tough comparisons, including the core hunting season arriving and Dick’s likely to more greatly feel the impact of pulling hunt from 125 stores. The year-ago Q3 was boosted by cold weather that helped drive cold-weather categories, particularly the Under Armour Cold Gear business. Finally, a favorable MLB playoff season last year led to healthy licensed sales that may also cause comps to decelerate from the 3.2 percent gain seen in the second quarter.

Still, Stack assured analysts that comp growth should continue as many headwinds, including the changes in space allocation and distribution philosophies, are behind the company as witnessed by improving top-line performance over the last three quarters.

Said Stack, “Those headwinds are behind us now. We feel that we’re enthusiastic about the three main categories of our business, apparel footwear and hardlines. And even with the continued to deterioration in the hunt business in the firearms business, we’ve been able to make up for that in these other categories and we expect to be able to do that through the balance of the year.”

He also stressed that besides the inventory buys and merchandise changes, investments in in-store service and in differentiated marketing are helping. Stack added, “All these tactics and investments we put in place are starting to pay off and we couldn’t be happier.”