Inside The Call: Crocs Hikes Outlook As Momentum Accelerates In 2021 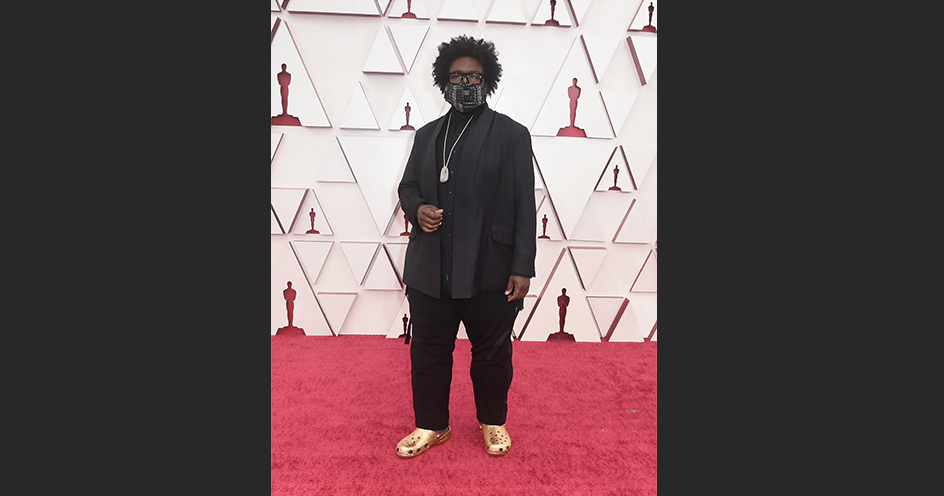 Crocs Inc. reported sales jumped 64 percent in the first quarter and said it now expects sales for 2021 to climb about 45 percent for the year. The comfy shoe brand has benefited from the comfort footwear trend in the stay-at-home economy, but it’s also increasingly worn as a fashion statement.

The latest sign of its increasing fashion clout was at this year’s Oscars, where Questlove, the musical director, wore gold Crocs clogs, above and below. Only four years ago, Balenciaga stunned fashion insiders sending Crocs down the runway in Paris, and the brand has since rolled out a steady stream of collaborations with celebrities including Justin Bieber, Bad Bunny, Post Malone, designers, and high-end retailers that often quickly sell out. 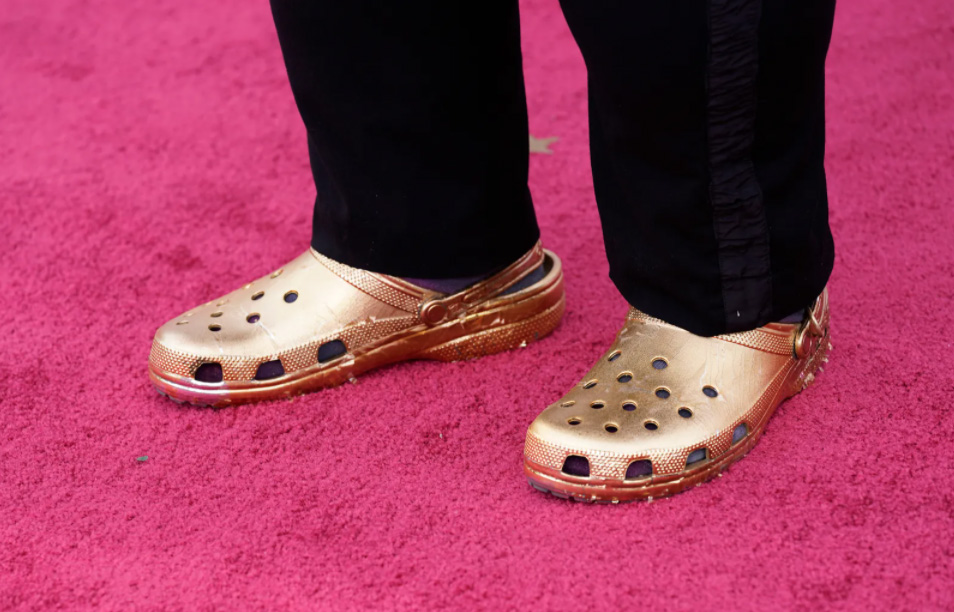 On its first-quarter conference call with analysts, Andrew Rees, CEO, said Crocs ranked at its highest level ever in Piper Sander’s spring “Taking Stock With Teens” survey. He said, “The strength of our brand remains unabated.”

First-Quarter Sales Climb 64 Percent
In the first quarter ended March 31, revenues reached $460.1 million, an increase of 63.6 percent on a reported basis and 60.5 percent on a constant-currency basis. Crocs previously forecasted sales in the quarter to expand between 40 percent and 50 percent. Wall Street’s consensus estimate had been $416.0 million.

Income from operations grew nearly six-fold to $124.7 million from $20.8 million a year ago, while operating margins expanded to 27.1 percent from 7.4 percent. 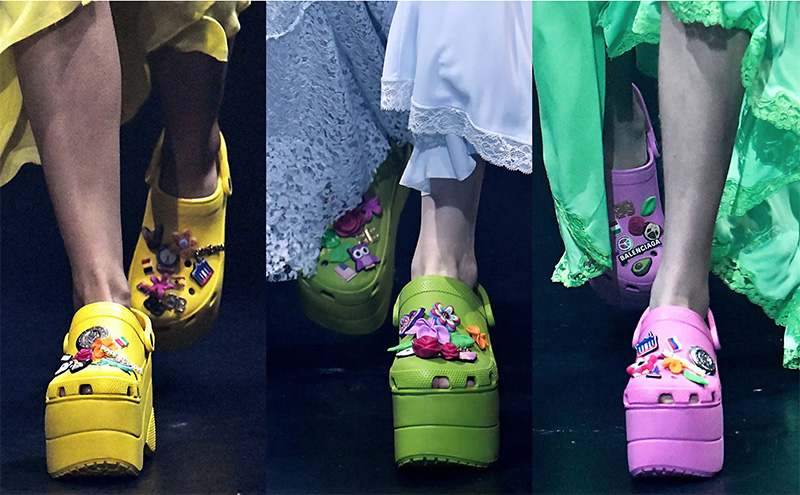 Wholesale revenues climbed 50.1 percent to $290.0 million, fueled by growth in all segments. E-tail and its Top 20 brick & mortar accounts experienced “exceptional sell-through,” said Rees. Distributors had the highest growth as inventories were replenished in anticipation of strong 2021 growth.

Rees said Crocs began terminating select North American wholesale relationships in the quarter as part of a strategy to focus more on wholesale partners “aligned with our brand strategy and desired positioning in the marketplace.” He inferred the similar moves being made by Nike, Adidas and others to streamline wholesale distribution. The CEO added, “Looking forward, we’ll remain focused on our strategically important accounts comprised of leading e-tailers, sporting goods, family footwear, and specialty retailers.”

Americas Growth Expands 88 Percent In Q1
By region, revenues in the Americas increased 87.5 percent on a constant-currency basis to $276.4 million. DTC grew 131.3 percent with the help of strong traffic and conversion. Last year’s store closures contributed to triple-digit growth in both company-owned stores and e-commerce. Wholesale growth was 59.4 percent as strong sell-through more than offset logistics challenges.

In the Asia Pacific region, revenues grew 20.1 percent on a constant-currency basis to $82.6 million. DTC increased 20.6 percent while wholesale grew 28.6 percent. Digital revenues grew 60.1 percent, and penetration increased significantly from 24.4 percent to 30.9 percent. Balanced growth was seen across most key countries. India was a standout with triple-digit growth. Distributors also returned to growth, albeit at a slower rate.

Clogs Sales Surge 87 Percent
From a category standpoint, sales of clogs climbed 87 percent to represent 76 percent of total footwear sales from 65 percent last year. Standout styles include the Out of This World Slide and Marvel prints, shown below.

Sandal revenues increased 17 percent to represent 17 percent of footwear sales, down from 24 percent a year ago. Rees said Crocs is encouraged by the initial results of sandals featuring personalization. Clogs growth is expected to outpace sandals in 2021, but sandals are expected to expand at a faster rate long-term. Jibbitz, shown below right, sales “continue to be outstanding,” more than doubling for the quarter as the global personalization trend continues. 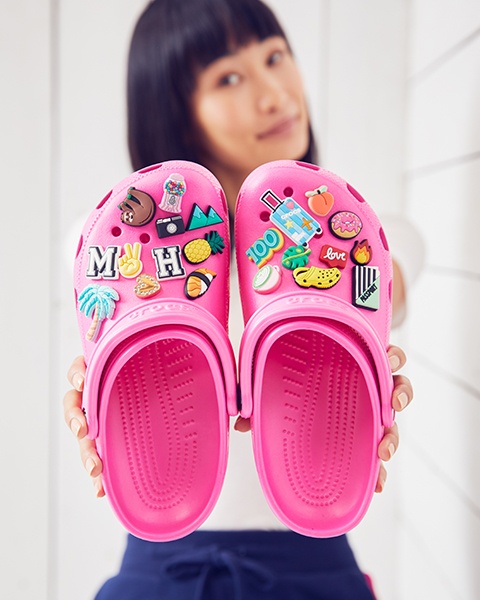 Logistics Challenges Causing Some Delays
Inventories were essentially flat at $196.5 million as of March 31 versus $195.8 million a year ago. Year-ago inventories were elevated to store closures due to pandemic closures. Compared to 2019, inventories are up about 50 percent.

Rees said retailers are “probably not in stock to the degree they would like to be, quite frankly,” but inventories are at adequate levels to support robust growth in the near term. The blockage of the Suez Canal and significant bottlenecks in West Coast ports has led to shipment delays, and the company is being “as proactive as possible” to support its strong growth trajectory. A new EMEA distribution center opened in the Netherlands, and the transition is running smoothly. The expansion of its U.S. distribution center network is also proceeding as planned.

Non-GAAP adjustments in the quarter are expected to consist of $3 million related to distribution center investments that will impact gross margin.

For the full year, updated guidance now calls for: