Columbia Sportswear Co. reported net sales grew 16 percent in the second quarter to $324.2 million compared with  sales of $280.5 million for the same period in 2013, including a less than 1 percentage point benefit from changes in currency exchange rates.

Second quarter 2014 net loss totaled $6.3 million, or 18 cents a share, including a net tax benefit of $5.6 million, or 16 cents per share, resulting from the favorable resolution of uncertain tax positions from prior years. During the quarter, the company incurred approximately $3.4 million of non-recurring transaction costs related to the prAna acquisition, and approximately $1.3 million in amortization of certain acquired assets and other integration costs which, combined, equated to $2.9 million net of tax, or $(0.08) per share. Second quarter 2013 net loss totaled $7.1 million, or $(0.21) per share.

Tim Boyle, Columbia’s president and chief executive officer, commented, “We are very pleased with our performance through the first half of 2014 and anticipate strong Columbia and Sorel brand momentum in the second half, particularly in North America. In addition, our brands continued to stabilize in the key Europe-direct markets that are a focal point of our ongoing efforts to drive renewed growth and improved profitability.

“With the successful completion of our previously announced acquisition of prAna during the second quarter, we enter the second half of 2014 with a new exciting brand in our portfolio, which we expect to be accretive in 2015.”

Boyle concluded, “Our first half performance, coupled with the confidence we have in our brands, our line-up of innovative products, and our global team, led us to increase our full year 2014 financial outlook. We believe we are beginning to make meaningful, sustainable progress toward our goal of improving our profitability.”

The second quarter is the company’s smallest revenue quarter, historically accounting for a mid-teens percentage of annual net sales. As a result, regional, category and brand net sales results often produce large percentage variances in relation to the prior year’s comparable period due to the small base of comparison and shifts in the timing of shipments.

During the second quarter, the company completed its previously announced acquisition of prAna Living LLC for $188.5 million, net of acquired cash. The company ended the second quarter with $394.4 million in cash and short-term investments, compared with $430.6 million at June 30, 2013. Approximately 54 percent of cash and short-term investments was held in foreign jurisdictions where a repatriation of those funds to the United States would likely result in a significant tax cost to the company.

All per-share amounts in the following outlook are based on projected outstanding shares prior to the effect of the pending two-for-one stock split scheduled to take effect after the close of business on September 26, 2014.

Including prAna’s anticipated operating results for the June through December period, as well as the non-recurring transaction costs and amortization of certain acquired assets and other integration costs described above, we expect our full year 2014 financial results to include: 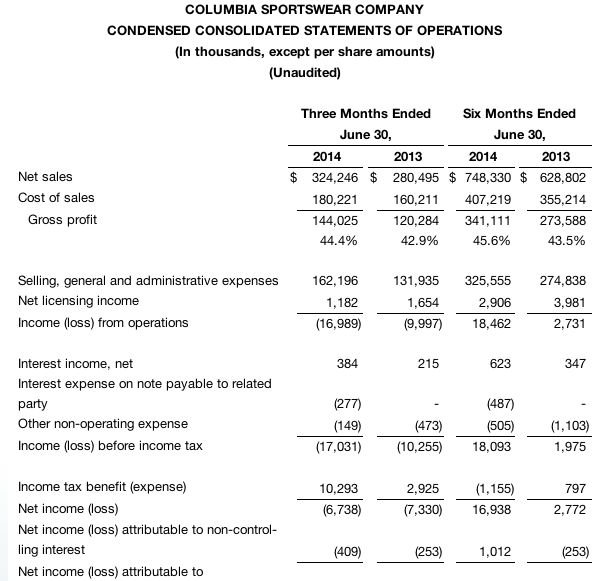 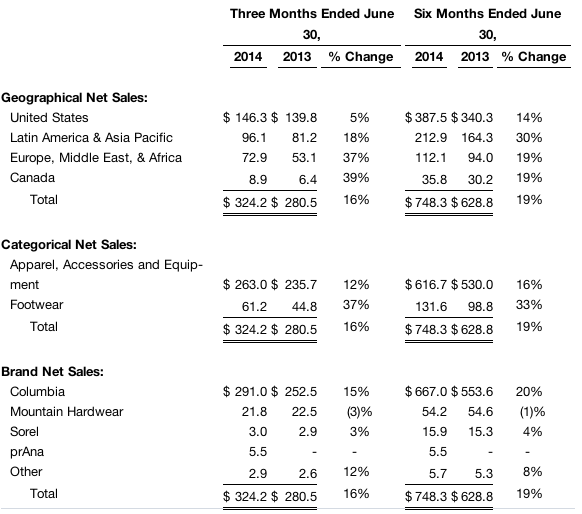