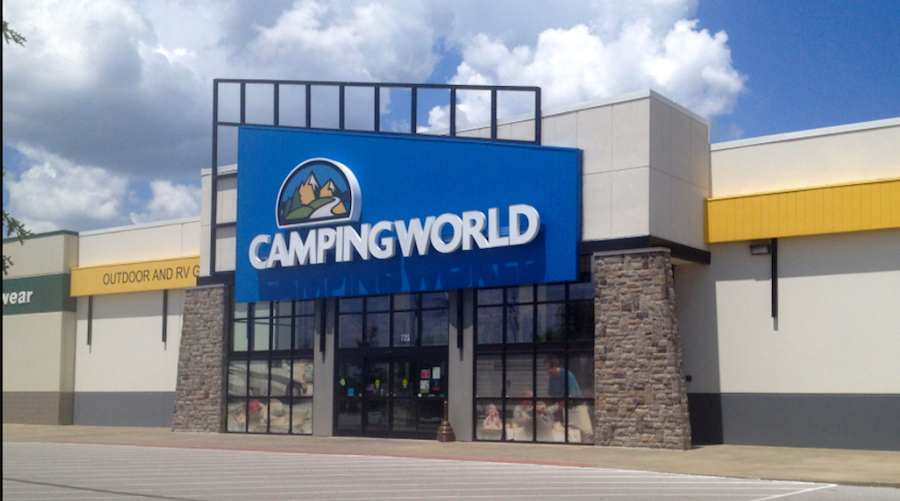 While all of Gander Mountain’s 126 stores are undergoing going-out-of-business sales, Marcus Lemonis, chairman and CEO of Camping World, has pledged to bring back at least 70 locations.

“About 10 days ago I bought all of the assets, all of the intellectual property, all of the trademarks, all of the leases and the Overton’s business. Except for the fact that I did not buy, intentionally, the inventory that’s in the stores,” Lemonis, better known to the public as the star of the CNBC show, “The Profit,” told the IndyStar Sunday morning.

He added, “A liquidator bought the inventory that’s in the stores and they have the right to sell that inventory down and out as if it’s going away. But the confusing message is whether a store is staying open or not. And ultimately we control the leases – every single property. And my intention is to keep at least 70 open.”

As reported, under the terms of the deal, Camping World is only obligated to assume a minimum of 17 leases. The company will also immediately operate the Overton’s business as a going concern upon closing the transaction this month. Camping World agreed to purchase Overton’s existing inventory for an amount equal to cost, which as of the date of the bankruptcy auction was $15.6 million plus $22.2 million for certain other assets of the Gander Mountain and Overton’s business.

The assets include the right to designate any real estate leases for assignment to Camping World or other third parties as well as intellectual property rights, operating systems, platforms, distribution center equipment, Gander Mountain’s and Overton’s e-commerce business and fixtures and equipment for the Overton’s retail and corporate operations.

On Camping World’s first-quarter conference call last week, Lemonis was also bullish, even slamming Gander Mountain’s former management for sending the chain into bankruptcy proceedings. At the same time, he was more measured in discussing the Gander Mountain opportunity.

He particularly hoped to capitalize on selling Camping World’s Good Sam products to the “outdoor enthusiasts” from Gander Mountain’s and Overton’s that includes club membership sales, credit card services, warranty insurance. He added, “Let me super clear, we are going to market RVs to the multimillion person database that’s in there as well.”

He noted that while Gander Mountain’s business was “solid” in 2014, 2015 and the beginning of 2016, gun sales have seen a “dramatic drop” with the arrival of the Trump administration. A more pro-firearms administration has reduced concerns over tightening NRF restrictions over gun ownership that had boosted sales in recent years.

Lemonis said Camping World management doesn’t know if the current rate of firearm sales is the “new normal” or whether they’ll eventually recover. But he said the company is basing all decisions around real estate as well as staffing and inventory “on the trough, not the peak.”

Finally, Lemonis stressed that the company only plans to reopen stores “that have a clear path to profitability with EBITDA margins consistent with how we run the rest of our business.” The company’s EBITDA margin was at 8.1 percent in the first quarter. Stated Lemonis. “I will not be doing anything or taking on any liabilities that put that EBITDA margin in jeopardy.”

Still, he said on the call to analysts that there are “potentially as many as 50” stores “that could actually enhance” its margin number because of his expectation around lease renegotiations as well as sales of other products and services through any reopened doors. Margins for the Gander Mountain business are also expected to be helped by “a cataclysmic shift” in the way inventory is managed as well as the location of its distribution center.

“So as I think about each box individually, is it profitable in its own right and can it really be maximized for our other assets,” said Lemonis. “Do I believe that the thing could be huge? I do. But we are not going to chase revenues. You guys have heard me say, I hate revenue, I like earnings. And so every location or every decision that we make will be based on not compromising our 8.1 percent EBITDA margin.”

Lemonis said the plan is to maintain the current operation of Overton’s catalog and online business, along with two Overton’s stores. For the Gander Mountain nameplate, the plan is to “very tightly refine the merchandise assortment, re-negotiate leases and operate only those stores with a very clear path to profitability.”

He added, “We don’t know which stores we may be looking to keep, what the merchandise assortment will look like today from store to store and when individual stores will come online, but we do know that we’re focused on keeping those stores that have a clear path to profitability.”

He called Overton’s “the secret jewel” of the transaction. He noted that Gander Mountain paid $77 million for Overton’s in 2007 when the business generated $60 million in revenue and between $8 million to $9 millions of EBITDA. The EBITDA and sales level are basically the same now. Lemonis said, “So despite all of the nonsense that happened in Minnesota, that staff at was very good at insulating that business.”

He also noted that Overton’s complements Camping World as RVers “love lakes and Overton serves the lake community and the shore community” as opposed to the deep sea fishing community that’s addressed by a chain like West Marine. He expects to be able to open Overton’s stores either as standalone locations next to Camping World locations and/or Gander Mountain stores in the future.

“I would expect Overton’s presence to dramatically increase without increasing the overall company’s fixed stock structure,” he stated. “I think everybody should take very close notice that when we have markets like Astro in North Carolina, like Myrtle Beach, like some of our locations in Texas and Florida where we already have a facility that have an 8 percent EBITDA margin and we can find 5,000 or 8,000 square feet, we will add to Overton to attract more people, to generate more revenue and to get that EBITDA margin from 8 to 9 or 10.”

He also said Camping World wants to “make sure that we’re complementing that with existing Camping World and Overton inventory to maximize margin and maximize share of wallet.”

As far as merchandise changes at Gander Mountain, Lemonis suspects Gander Mountain’s apparel assortments will be reduced “significantly” while the stores expand some categories that Camping World has expertise selling, including generators, towing and hitching, grilling and chairs. He said, “There are very few products that will lap over into both, but when we do find products that was in both stores, we’ll obviously consolidate to a similar vendor and look for margin improvement.”

Some Gander Mountain stores “that permit space,” citing Bowling Green in Kentucky or in Augusta, Georgia or in Amarillo, Texas as examples, may be able to sell RVs. Pop-ups as well as “full blown dealerships” nearby those locations may be explored.

The Gander Mountain locations are expected to continue to carry a selection of handguns and shotguns that suit market demand and deliver adequate margins. But Lemonis said his own conversations with store managers and customers indicate Gander Mountain‘s mix shifted too much toward guns and an expansion on the fish side, and even getting back into selling live bait is expected.

“At the end of the day, we think there’s got to be nice assortment,” said Lemonis. “The model is very simple, low cost of SG&A, very competitive understanding of what the online community is doing, and having an assortment there that is curated for the local market. I’d rather have 50 stores heavily curated for that local market than 150 stores that look like everything is the same, which is essentially what it was.”

He attributed the bankruptcy filing to “poor” real estate transactions, “undisciplined” inventory management and stores that weren’t curated market by market. He noted that inventory decisions were being made by people with “no experience,” including its largest shareholder. He believes management didn’t clearly understand that “what sells in Michigan does not sell in Jacksonville, Florida.” He further said Gander Mountain had a “very sloppy SG&A model” with “vice president after vice president and just layers of staff that no business could survive on.”

Finally, he believes Gander Mountain over-expanded in reaching more than 160 stores. He elaborated, “I think there was some cannibalization in markets like Wisconsin and Florida and Michigan and Texas that just has no reason to it. So, yes, we are the beneficiary of somebody else’s sloppiness.”

Asked about the competitive landscape, Lemonis acknowledged that Bass Pro and Cabela’s are “world class retailers” and strong competitors. But he also indicated Gander Mountain should be able to differentiate with its smaller store and lower-rent model. Said Lemonis, “We believe that with that tight SG&A, with the low real estate cost, we will be able to be the low-cost provider like we are at Camping World and still achieve the EBITDA margins.”