Also for the first quarter of 2015, the company reported earnings per share of 39 cents compared to 61 cents per share for the same period last year. This performance is better than anticipated due in part to better than expected gross margins and other income/expense. The company expects these results to carry through the year and therefore has increased its full year earnings guidance as discussed above.

“Although sales for the first quarter were slightly lower than we expected, overall I feel good about the business and our continued progress,” commented Chip Brewer, President and Chief Executive Officer. “Our brand momentum and market shares continue to improve and our profitability exceeded our expectations due in part to continued improvements in our manufacturing and supply chain along with tight cost management.  The first quarter effect from the strategic shift in product launch timing and the consumption tax increase in Japan should smooth out as the year progresses. In addition, some regions are just beginning to open up for the new golf season and we are cautiously optimistic for improved market conditions as the year progresses.”

“We continue to realize the benefits from the many changes we have made in our business over the last few years,” continued Mr. Brewer. “As a result of these changes, we have generated increased consumer interest in our products, improved our operating efficiencies, and improved overall profitability. While there is certainly more work to be done, I believe we have set the foundation for steadily improved financial performance and long-term shareholder value.”

For the first quarter of 2015, the company reported the following results, as compared to the same period in 2014:

The company has included in the schedules to its press release the company's results on a constant currency basis.

The Company provided the following estimated full year results for 2015:

The decline in the Company's estimates for full year net sales from its previous GAAP guidance of $855 million – $880 million is due to the amount by which first quarter net sales missed Company expectations as discussed above.  A further strengthening of the U.S. Dollar for the balance of the year would also negatively affect the Company's sales estimates.

The Company estimates that its 2015 GAAP gross margins as a percent of sales will improve approximately 100 basis points from its previous guidance of 40.0% due to a stronger sales mix and continued operational improvements more than offsetting adverse foreign currency rates.

The Company estimates that its 2015 Pre-tax income will increase from its previous guidance of ($1) million – $8 million due to improved gross margins more than offsetting the decline in net sales.

The Company estimates that its fully diluted earnings/loss per share will increase from its previous guidance of ($0.09) – $0.01 due to improved gross margins more than offsetting the decline in net sales. The Company's 2015 earnings per share estimates assume a base of 79 million shares as compared to 78 million shares in 2014. 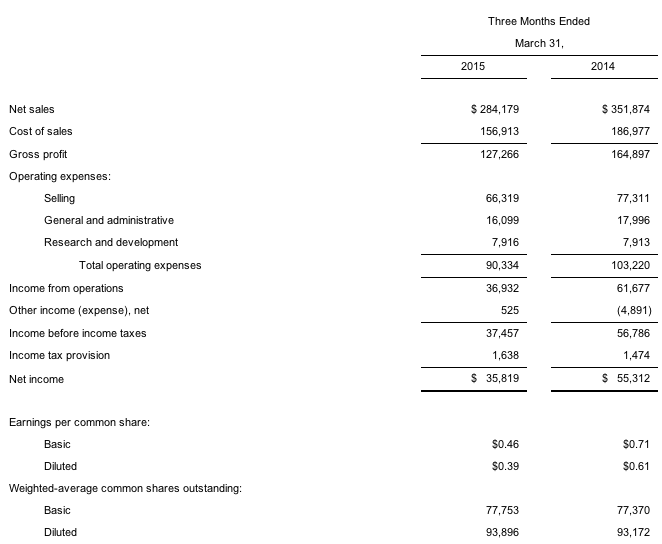 Orvis to Open Store in Freeport