For the quarter, we were pleased operating margin improved from 9.0 percent to 10.6 percent and new stores significantly outperformed legacy stores in sales and profit per square foot,” said Tommy Millner, Cabela’s chief executive officer. “We are less pleased that the rebound in revenue, following the firearms and ammunition surge of the last two years, is occurring slower than expected and as a result comparable store sales declined 11.2 percent. In addition to strong new store performance, we were encouraged by the performance of Cabela’s CLUB and expense management in the quarter.”

For the trailing twelve months, our 20 new format stores opened for the full period outperformed our legacy store base by 40-60 percent in both sales and profit per square foot, Millner said. These new format stores averaged sales per square foot of nearly $460. With this strong new store performance, our retail store expansion remains on track with plans to open 13 to 15 new stores per year over the next several years. During the quarter, we opened six new stores, marking our entrance into several significant markets, including Buffalo, NY; Atlanta, GA; Portland, OR; Ontario, Canada; and British Columbia, Canada.

“Thanks to the hard work and dedication of our outfitters, in the face of the slower sales recovery, we successfully controlled expense growth in the quarter,” Millner said. “Additionally, during the quarter, we reduced anticipated incentive compensation by the $11.8 million previously recognized in the first half of the year. Reductions of professional fees and other corporate overhead also contributed to cost savings in the quarter.”

“For the quarter, our Cabelas branded product sales penetration increased by 100 basis points,” Millner said. “The launch of our Instinct line has been a success with positive customer reactions to this new innovative line of products. Along with the Instinct line, we have had positive customer response to our Cabelas Guidewear®, Cabelas XPG, and Wildlife and Land Management products. These results give us confidence in the prospects for future growth in Cabelas branded products.”

During the quarter, merchandise gross margin decreased 100 basis points to 36.3 percent from 37.3 percent in the same quarter a year ago. Approximately 60 basis points of this decrease is due to the previously announced adjustment in the presentation of reimbursement between segments. As a reminder, this new presentation, initiated in the second quarter, will be ongoing and has no impact on consolidated operating income or earnings per diluted share. See the “Selected Financial Data” table located herein for a more detailed explanation of this adjustment.

The Cabela’s CLUB Visa program had another solid quarter and continued to build a base of extremely loyal customers. CLUB members shop more frequently and have higher average spend. During the quarter, growth in the average number of active credit card accounts was 7.5 percent due to new customer acquisitions in our Retail and Internet channels. Growth in the average balance per active credit card account was 5.2 percent, and growth in the average balance of credit card loans was 13.0 percent. For the quarter, net charge-offs remained at historically low levels of 1.56 percent compared to 1.72 percent in the prior year quarter. Increased Financial Services revenue was driven by increases in interest and fee income as well as interchange income.

“In light of the slower than expected rebound from the surge, we are adjusting our full year guidance,” Millner said. “Thus far in October, comparable store sales have improved over third quarter levels, and we now expect fourth quarter comparable store sales to decrease at a mid-single digit rate and total revenue to grow at a high single digit rate. Based on these revenue projections, we expect full year 2014 adjusted earnings per diluted share to be between $3.10 and $3.20. While our 2015 budget is not yet finalized, we expect to return to a low double digit growth rate in both revenue and diluted earnings per share for full year 2015.” 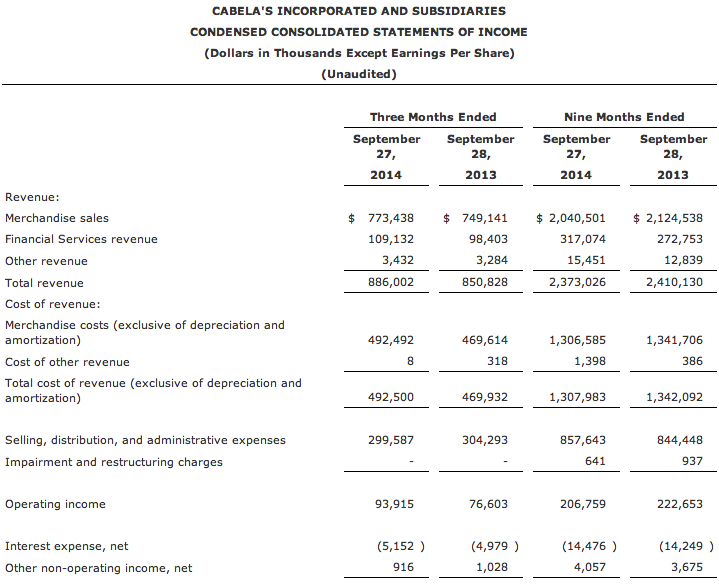