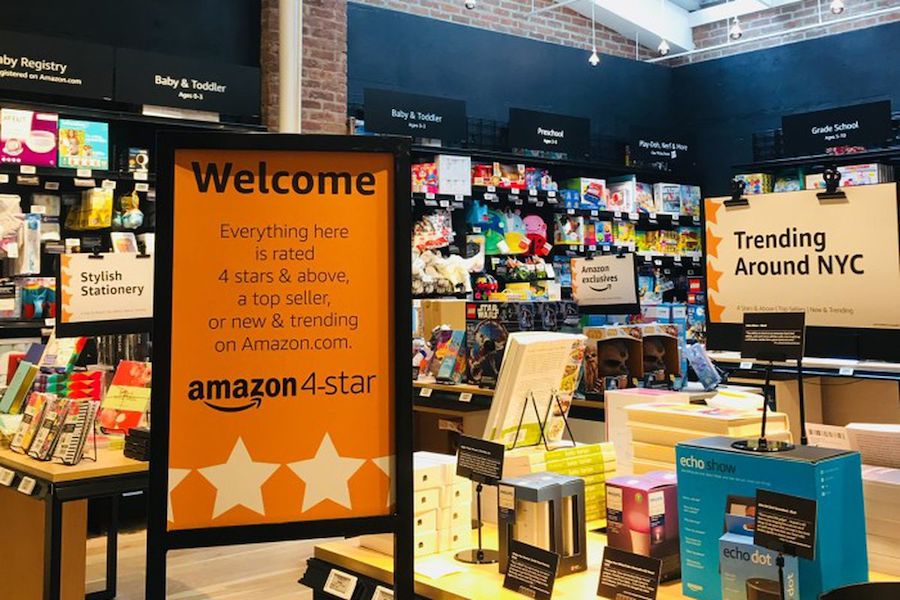 Amazon on Thursday opened Amazon 4-star, a new physical store where everything for sale is rated 4 stars and above, is a top seller or is new and trending on Amazon.com.

According to Golf Datatech, golf rounds played in the U.S. were down 1.6 percent in August year-over-year on a national level.

Colorado Teardrops, specializing in premium teardrop style trailers, announced that the company is relocating headquarters to a new building on October 1, allowing for further expansion as the company grows.

Gordon Hayward, the Boston Celtics forward, has reportedly agreed to a “massive shoe deal” with Chinese sportswear brand Anta, according to ESPN.

Panelists have been announced for the IHRSA Women’s Leadership Summit, hosted by Athletic Business, on Thursday, November 8, at the Ernest N. Morial Convention Center in New Orleans, LA.

Nike nearly ended the company’s contract with Colin Kaepernick in the summer of 2017 before moving this year to have the former quarterback play a prominent role in the brand’s 30th anniversary ad campaign according to a report in the New York Times.

Marcolin Group, one of the world’s leading eyewear companies, and TBL Licensing LLC announced the early renewal of the licensing agreement for the design, production and worldwide distribution of Timberland optical frames and sunglasses.

Fabletics, the active-lifestyle brand co-founded by Kate Hudson in 2013, announced the first partnership between Hudson and her mother, actress Goldie Hawn, to launch a global capsule collection in support of The Goldie Hawn Foundation’s MindUP.

Johnson Outdoors Inc. announced approval by the company’s Board of Directors of a quarterly cash dividend of 14 cents per class A share and 12.73 cents per class B share.

Investors in American Outdoor Brands Corp., the parent of Smith & Wesson, on Tuesday won a shareholder vote urging the firearms maker to do more to address gun violence.

With support from the Outdoor Industry Association (OIA) and specifically the Outdoor Foundation (OF), the Association of Outdoor Recreation and Education (AORE) will assume ownership of the Outdoor Nation Campus Challenge (ONCC) in the fall of 2018 and will work alongside OF staff to seamlessly transition assets, knowledge and resources.

The Conservation Alliance and Outdoor Industry Association released a letter Monday signed by more than 280 outdoor-focused businesses and organizations asking Congress to permanently reauthorize the Land and Water Conservation Fund (LWCF) with full and dedicated funding.

Retailer Nordstrom Inc. on Tuesday announced plans to reopen the company’s store at the Mall of San Juan in Puerto Rico, which had been closed since fall 2018 as a result of severe damage from Hurricane Maria.

Sears Holdings Corp. CEO Eddie Lampert’s hedge fund in a regulatory filing called on Sears’ board to sell $1.5 billion more in real estate and restructure $1.1 billion in debt in order to stave off a bankruptcy filing.

The PGA Tour and Technogym have announced a multi-year partnership designating Technogym as an Official Supplier of the PGA Tour Player Performance Center.

Daniel Emerson, CEO of Light & Motion, was interviewed on Monday by Audie Cornish on the National Public Radio program, All Things Considered. The story is about the third round of United States’ tariffs on China that started Monday. Emerson said the tariffs “tax U.S. production, but give a free pass to our China-built competition.”

Brooks Running Company is inviting marathoners and 10 milers to participate in the “Outrun Yourself Challenge,” which encourages runners to strive for a new goal. Runners who improve their overall race time from 2017 will be awarded for their accomplishment with prizes including Brooks gear and entry into the 2019 Medtronic Twin Cities Marathon.

Outdoor Industry Association (OIA) announced the association’s endorsement of U.S. Senator Martin Heinrich for re-election, due in large part to his tireless support for New Mexico’s public land and water and the state’s nearly $10 billion outdoor recreation economy, along with the 99,000 jobs it supports.

Led by an additional 15,009 participants in girls sports programs, the overall number of participants in high school sports increased for the 29th consecutive year in 2017-18, according to the annual High School Athletics Participation Survey conducted by the National Federation of State High School Associations (NFHS).

Nike released some clever imagery honoring Tiger Woods and his victory at the recent PGA Tour Championship, his first PGA event win since 2013.

Earth Treks Climbing and Fitness and Planet Granite Climbing, Yoga and Fitness on Monday announced the change of their corporate name to El Cap Holdings LLC.

Tile, a startup that makes an app and devices to help keep track of the location of things, appointed CJ Prober, former COO of GoPro, as the company’s new chief executive officer.

Pirelli, the Italian tire manufacturer, hired Sasquatch Agency as the company’s public relations agency of record for all cycling products within the United States of America and Canada.

About 970 safety straps from Titan Manufacturing and Distributing are being recalled.

Asics announced five start-ups to benefit from Tenkan-Ten, the growth catalyst program for businesses disrupting the sports and wellbeing sector. It is a part of the company’s recently launched new business and innovations division.

The University of Massachusetts Board of Trustees unanimously approved the creation of the Dr. J. Keith Motley Chair for Sports Leadership & Administration at UMass Boston. The chair will head a new sports management and leadership Bachelor of Arts program enabled by a $5 million pledge, the largest in UMass Boston history, from Boston-based New Balance.

On December 5 to 8, FIBO—the world’s largest interactive showcase of fitness, health and wellness innovation—will make the company’s United States debut at the Orange County Convention Center in Orlando, FL. The event is produced by Reed Exhibitions.