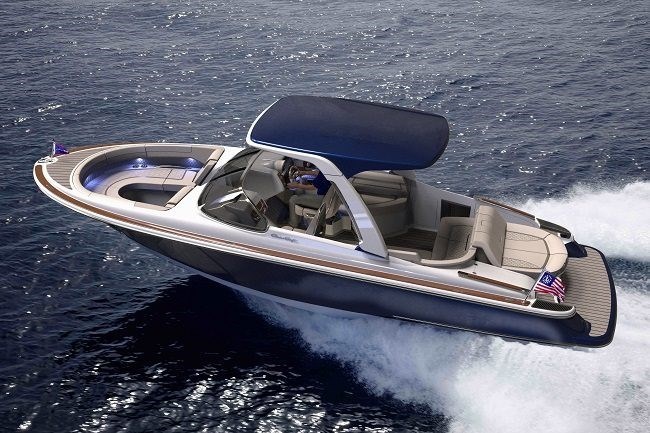 Winnebago Industries Inc. acquired Chris-Craft (pictured), the recreational boat builder, from Stellican Ltd., which has owned Chris-Craft since 2001. Terms of the transaction were not disclosed.

The Outdoor Industry Association (OIA) announced two returning board members and four new incoming members to the company’s board.

Lululemon Athletica Inc. announced that the company has agreed to repurchase 3.3 million shares of the company’s common stock in a private transaction with funds affiliated with Advent International Corp.

Dick’s Sporting Goods made a donation of golf clubs, balls and other equipment to Bunkers in Baghdad, which supports American troops and veterans deployed around the world and recovering in the U.S.

Imports at the nation’s major retail container ports are expected to set record numbers this summer and fall, even as the debate over trade and tariffs continues in Washington, according to the monthly Global Port Tracker report released Thursday by the National Retail Federation and Hackett Associates.

Proposition 68 was approved in California. The measure will authorize the state to borrow $4.1 billion for investments in outdoor recreation, land conservation and water projects.

Puma has launched a global agency review. The company has been working with Publicis Media’s Blue 449.

Rogue Fitness formally announced the acquisition of OSO Barbell, a designer and manufacturer of barbell collars and other specialty weightlifting products. As part of the agreement, Rogue will carry all OSO products into the company’s line-up in 2018.

Thefts, fraud and losses from other retail “shrink” decreased to $46.8 billion in 2017 from $48.9 billion the year before, as shoplifting and organized retail crime continued to be the leading causes, according to the annual National Retail Security Survey released Wednesday by the National Retail Federation and the University of Florida.

Through a technology platform powered by Locally, Spy now delivers an online-to-offline shopping experience that showcases immediate local availability on the same page as the products being viewed.

Crocs Inc. announced that Bill Gray has been appointed to the company’s board of directors. Gray has served as a senior adviser to Blackstone’s Private Equity Group since 2010.

Deckers Brands announced the appointment of Brian A. Spaly and Cindy L. Davis to the company’s board of directors. Coinciding with these appointments, Deckers also announced that Karyn O. Barsa has resigned from the Board.

Element announced the addition of Jon Sinko to the company as VP, global merchandising and design, overseeing the brand’s product function globally.

In an interview with Bloomberg, Adidas CEO Kasper Rorsted predicted that unit sales of jerseys at this year’s World Cup will exceed the 8 million Adidas sold in 2014.

Gracedbygrit has been acquired by Hylete. Both are digitally native women’s athletic apparel brands.

Shoe Carnival Inc. will donate 10 percent of total purchases back to shoppers’ schools of choice in the Philadelphia and surrounding areas.

Under Armour has reached an agreement to outfit Bradley University in Peoria, IL.

The athletics department of Gustavus Adolphus College in St. Peter, MN, has entered into a five-year partnership with BSN Sports and Nike.

Riddell announced the launch of the company’s annual Smarter Football initiative. Special for the fourth season of the program, Riddell and brand ambassador and strategic advisor Peyton Manning teamed up to unveil ’18 in 18,′ inviting teams to apply for 18 total equipment grants–increasing the amount from previous years’ 10.

FloSports, a provider of live digital sports and original content, on Tuesday announced a multiyear rights partnership with the Professional Bowlers Association (PBA).

Kiwi Energy has teamed up with The Yoga Trail in Central Park this season as a part of the group’s health and wellness initiative.

The May 2018 NSSF-adjusted National Instant Criminal Background Check System (NICS) figure of 904,834 is a decrease of 8.5 percent compared to the May 2017 figure.

Bear Archery announced the hiring of Jack Borcherding, formerly at Cabela’s, to serve as marketing manager.

More than 30 Signed up for Interbike East Demo