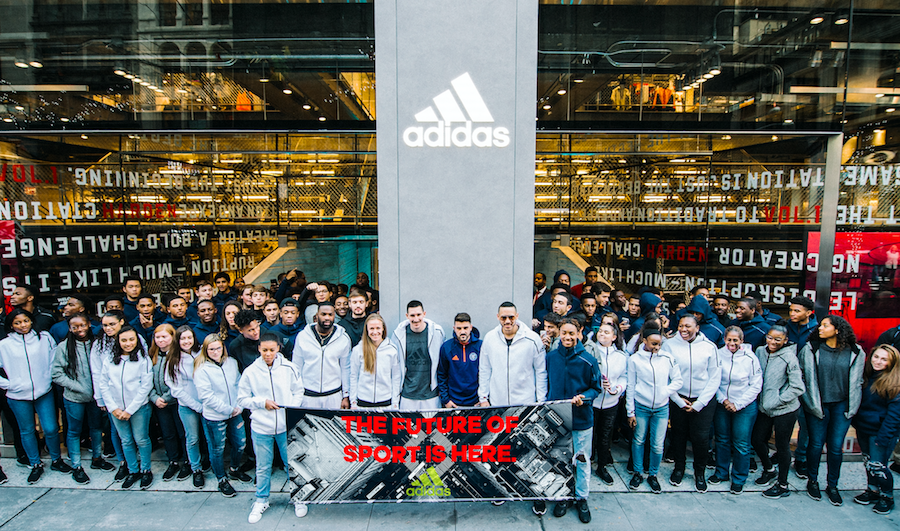 Adidas AG said a slowdown in Western Europe and continued weakening of key footwear franchises in the first quarter were more than matched by strong sales momentum overall in North America and Greater China, an accelerating apparel business and strong full-price selling.

Listing strengths and weakness, adidas CEO Kasper Rorsted on a call with analysts cited strong top-line growth as one of the company’s strengths, although it was in line with expectations. The gains were marked by healthy double-digit growth on a currency-neutral basis in strategic growth areas, including a 23 percent gain in adidas North America, 26 percent Greater China and 27 percent in e-commerce.

The online gain marked a slowdown from 57 percent seen in the fourth quarter due to the timing of product launches. The adidas shopping app was launched in the U.S. and Western Europe and is already generating a “much higher” conversation rate for those using the app versus adidas’ normal online channel.

Another highlight was an acceleration in the company’s apparel business, driven by athletics product and not by World Cup jerseys. Said Rorsted, “The majority of the gains are coming from outside Football.”

Another strength was cited as strong gross margin increase, reflecting a focus on “high quality” or healthy-margin sales.

Finally, the sizeable improvement in operating margin was cited as a strength and the improvement came despite investing 12 percent more in marketing year-over-year to drive brand heat. Rorsted said that with a 17 percent profit gain coming from 2 percent top-line growth, adidas is starting to better leverage its scale. He noted that a “substantial” decline in head count year-over-year was a key component in the margin improvement.

Among the challenges were seen as sales decline in decline in Emerging Markets and Russia/CIS, reflecting challenging market conditions.

Footwear growth also slowed to mid-single digit gains versus from 24 percent currency-neutral growth in Q417 due to a slowdown in key major franchises, particularly Stan Smith and Superstar. Both franchises had been delivering robust gains for years and were expected to slow down.

Harm Ohlmeyer, CFO, on the call said the company is still guiding 10 percent currency-neutral growth in the year with faster growth in apparel expected than footwear. Ohlmeyer said that fits with the company’s goal to better balance footwear and apparel mix, and management also feels that the new franchises need “nurturing and time to be lasting, so we don’t overshoot.”

Other challenges include a normalizing of momentum at Originals reflecting tough comparisons from prior periods. Rorsted said the company had been generating a “very, very high growth rate” from Originals and is gaining “more balanced growth” from a distribution standpoint. Finally, concept stores are seen as a challenge as comps declined in the quarter, driven by Russia/CIS.

Sport Performance for adidas Brand grew 11 percent, led by double-digit gains in Football, Training and Running. Sport Inspired sales, including Originals and Neo, climbed 13 percent, due to double-digit growth in both Footwear and Apparel. Said Rorsted, “We’re now getting a more balanced portfolio from sports and sports inspired.”

Reebok’s revenues were down 3.0 percent on a currency-neutral basis to €440 million ($527 mm) while sinking 10.6 percent on a currency-neutral basis. The decline was mainly due to sales declines in Asia-Pacific, Russia/CIS and Latin America. The Asia-Pacific business was impacted by declines in Japan due to a mature economy and South Korea due to the impact of travel bans on Seoul.

North America returned to growth, up 3 percent. A return to growth for Reebok was also seen in Western Europe.

Said Rorsted, “We are getting closer to the point that we’re striving for. That is turning the Reebok brand into becoming profitable. We are at the same time continuing to invest into the Reebok brand over-proportionately.”

By region, revenues in North America jumped 21.1 percent on a currency-neutral basis to €1.04 billion ($1.25 bn) and gained 5.3 percent on a reported standpoint.

Adidas Brand revenues were up 23 percent, driven by double-digit growth in all key categories.

Reebok brand revenues grow 3 percent in North America, led by increases in Running and Classics. Ohlmeyer said that while the focus on Reebok has been on improving profitability through the Muscle Up turnaround initiative, growth is expected to continue for Reebok in 2018 in North America.

Gross margin for the North America region eroded 30 basis points to 37.8 percent as some warehouse constraints that impacted the second half of 2017 led to the need to clear inventories in the first quarter. Additional inventories will need to be cleared in the second quarter although to a lesser extent.

Operating margin down 40 basis points to 9.5 percent, mainly due to the gross margin decline. Adidas still expects operating margins to improve in North America in the full year.

In the Asia-Pacific region, sales grew 15.1 percent currency-neutral to €1.86 billion ($2.2 bn) while expanding 6.4 percent on a reported basis.

Gross margin in the Asia-Pacific region were up 20 basis points to 56.0 percent due to a more favorable pricing, channel and category mix. Operating margin was down 0.2 basis points to 35.7 percent Gross margin improvement more than offset by increase in operating percentage as a percent of sales. Said Ohlmeyer of the Asia-Pacific region, “Overall a very stable segment for us led by 26 percent growth in Greater China.”

Adidas Brand revenues were up 5 percent, driven by significant growth in Football and Originals. Reebok sales increased 1 percent on top of a 25 percent jump in the prior year period.

Ohlmeyer said growth in Europe has slowed in a “very mature market.” The gain in the quarter also reflected a boost from sell-in for the World Cup. With a similar World Cup boost not expected in the current quarter, Western Europe’s sales are expected to be flat for the second quarter.

The weakest country in the region is France, where is a mature market and new franchises being launched have “not worked as well” as some classic franchises in the country. Ohlmeyer said the country had over-proportionately sold Stan Smith models versus other areas. Adidas is also exiting the Decathlon chain in 2019 and that exit is already starting to impact sales. Similar to Brazil and Argentina, Ohlmeyer said Adidas in France is developing an “attack plan to get back to the right growth.”

In Latin America, sales grew 10.5 percent on a currency-neutral basis to €430 million ($515 mm) while declining 5.3 percent on a reported basis. Ohlmeyer said the region benefited from past restructuring activities in Brazil and Argentina and the growth was driven by Argentina, Mexico and Brazil. More importantly, operating margins in the Latin America region was up 650 basis points.

In Russia/CIS, sales were down 16.4 percent on a currency-neutral basis to €119 million ($143 mm) and gave back 25.5 percent on a reported basis. Ohlmeyer said the weakness reflects the ongoing impact of sanctions, low consumer confidence and related pricing pressures, as well as the closing of 93 adidas stores in the quarter on top of the closing of 180 last year. With a focus on expense and inventory management, operating margins in the Russia/CIS region were up 720 basis points in the quarter.

In the Emerging Markets, sales on a currency-neutral basis were down 5.4 percent to €308 million ($369 mm) and off 16.0 percent on a reported basis. Ohlmeyer described the overall performance in Emerging Markets as a “mixed bag.” The weakest area is the Dubai/United Arab Emirates (UAE) that’s being impacted by less travel and increased price sensitivity. Merging some distribution in the Dubai helped lift operating margin in the Emerging Markets by 210 basis points.

Rorsted said adias will “remain very disciplined in our segmentation” with product being specifically designed for the commercial price points and sports performance or originals not selling in value channels.  Said Rorsted, “We’ll continue to create brand desirability at the top of the pyramid.”

For 2018, adidas continues to expect sales to increase at a rate of around 10 percent on a currency-neutral basis, driven by double-digit growth in North America and Asia-Pacific.

Gross margins are forecast to increase up to 30 basis points to 50.7 percent. Gross margin will benefit from the positive effects of a more favorable pricing, channel and regional mix. These improvements will be partly offset by the negative impact from unfavorable currency movements as well as higher input costs.

The operating margin is forecast to improve between 50 to 70 basis points to between 10.3 percent and 10.5 percent, reflecting the projected gross margin improvement as well as operating overhead leverage, which is expected to overcompensate the planned increase in marketing investments.

Net income from continuing operations is projected to increase to between €1.615 billion and €1.675 billion, reflecting an increase of between 13 percent and 17 percent compared to the prior year level of €1.430 billion, excluding the negative one-time tax impact recorded in 2017.