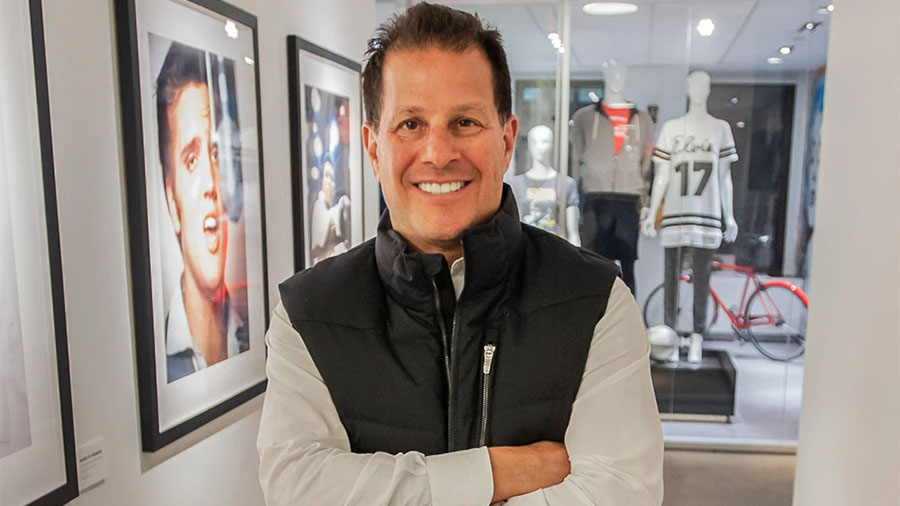 In the prospectus for his company’s IPO, Jamie Salter, founder and CEO of Authentic Brands Group (ABG), discussed how he came up with the digital-first licensing platform that he believes “deconstructs and reconstructs” the traditional brand-building model.

“Before ABG, I worked all over the brand business—founding, managing, operating, wholesaling, and retailing brands,” wrote Salter in a letter to shareholders. “I enjoyed a long career on that side of the industry, met a lot of smart people and learned a great deal about how successful brands win.”

Salter began his career in the snowboarding industry as a co-founder of Kemper Snowboards and then founder of Ride Snowboard that he took public in the nineties. Salter went on to Gen-X Sports, which he built into a diversified sporting goods company with over $100 million in annual sales. He then partnered with Fanatic’s founder and executive chairman Michael Rubin to create GSI Commerce, helping GSI secure licenses to sell goods from North America’s leading sporting goods retailers online.

In 2004, he founded Collective Licensing, a brand-licensing business that included Saucony, Sperry, Keds, and Stride Rite. In 2007, Collective Licensing was sold to Payless Shoe Source, which, that year, was renamed Collective Brands Inc. In 2006, Salter spearheaded the formation of Hilco Consumer Capital investment vehicle that purchased consumer brands such as Polaroid, The Sharper Image and Linens’ n Things. He left in 2010 to form ABG.

“I came to realize that most brands were structured for a different era — before the speed of digital and the complexity of global; antiquated, and ultimately difficult to retool as the market and the consumer evolves,” wrote Salter in the IPO prospectus. “Being best-in-class in every competency at every step of the value chain is an impossible task for most teams, but that’s what defines success in the traditional model. Insource all activities, capital needs, and risk. A vast number of great brands are structured like this.”

In 2010, he said he met his current partners at Leonard Green to explore a rethinking of the “broken” branded model.

Salter wrote, “Over-retailed, burdened by legacy cost and inefficiency and not equipped to win in the ongoing digital transformation, I pitched the idea of a new breed of brand licensing company. Within the hour, they ‘got it.’ We founded and capitalized ABG and set out to execute on our vision.”

Through its model, ABG retains brand ownership and approval rights over marketing strategies, product development and use of data. Licensee partners incur the capital, manufacturing, inventory, markdowns, and distribution responsibilities while working in partnership with ABG’s team to drive growth.

“We are a licensing business and are purely focused on brand identity and marketing,” wrote Salter.

Digital-First Approach
Another strength for ABG is its “digital-first flywheel” approach that has served as the basis for brand development. The digital focus gives ABG access to a broad array of consumer insights to support marketing strategies, drive conversion and acquisition efforts. It also drives growth by creating and deploying fresh content to drive consumer demand and generate increased retail sales and royalties.

ABG’s social media content engine spans a wide range of channels and platforms and includes over 230 accounts with over nine billion annual impressions and approximately 269 million followers as of March 31, 2021.

“ABG’s digital-first, 360-degree approach to marketing is at the core of our strategy and success,” wrote Salter. “We have pioneered leading digital marketing capabilities, which has served as the basis for our brand development. We engage with a massive number of consumers digitally—over 250 million followers and four billion annual impressions on social channels alone. Our expansive digital reach enables remarkably powerful data capabilities and allows us to do things that I wouldn’t have previously thought possible, like building our own multi-brand digital marketplace and subscription platforms.”

30 Percent CAGR Growth Since 2016
​Starting in 2010 with the Marilyn Monroe and TapOut acquisitions, the ABG licensing platform has completed over 30 brand acquisitions, including 19 over the past five years. The company generates approximately $10 billion in GMV (gross merchandising value) through its network of over 700 partners globally.

Revenues have grown at over a 30 percent CAGR since 2016 through organic growth and acquisitions. The average organic revenue growth rate was 7.7 percent between 2016 and 2019.

The company gets most of its revenue from licensing fees. According to its prospectus, ABG had a net income of $225 million in 2020 on total revenue of $489 million. Revenue for the three months ended March 31 rose 32 percent to $160 million from the year-earlier quarter.

ABG breaks its business into two segments: Lifestyle and Entertainment.

Lifestyle represents brands with “deep heritage” across women’s and men’s apparel, accessories, beauty, and home. Its Lifestyle segment is supported through 420 licensees globally and represented approximately 82 percent of revenue for the year ended December 31.

The Lifestyle segment breaks down further into five subsets:

Growth opportunities in the future include collaborations such as Forever 21 x Juicy Couture and the expansion of brands into new categories, territories and channels. International, only representing 21 percent of sales last year, was cited as an obvious untapped opportunity. ABG brands are represented in 136 countries worldwide.

Healthy Pipeline Of Acquisition Opportunities Projected
ABG plans to continue to acquire brands, pointing to a “broad range of potential opportunities” within Lifestyle and Entertainment and “new verticals that represent compelling candidates for the ABG model.” The prospectus listed opportunities in electronics, children’s, home, food & beverage, and hospitality, and acquired brands with an international presence.

ABG noted that it typically has a core licensee partner agreement signed before an acquisition is executed, “significantly de-risking the successful execution of the intended strategy and providing upfront visibility into the future revenue, profit and growth potential of acquired brands.”

ABG also said its track record of success, supported by its financial resources, ability to employ creative transaction structures and speed of execution, helps it attract acquisition candidates. The company also expects “numerous high-quality acquisition opportunities” to become available in the coming years due to disruption in traditional models.

Slater wrote in the prospectus, “We have an incredible team in place at ABG, and while we are energized by our success to date, we are just standing at the start line. We will continue to execute our ABG organic growth playbook while evaluating new deals with creativity and discipline. We are in the early inning on the next phase of our digital 2.0 strategy and our global growth agenda. The brand universe is vast, and we have a model that works with brands across a wide range of categories. With our versatile model, the way we look at the world, there is $13 trillion of branded commerce in our sights.”

Proceeds from the offering will be used to pay debts. ABG did not disclose how many shares it plans to sell in its offering or place a valuation on the business. The filing said the company plans to sell $100 million worth of stock, but that is a placeholder amount and will likely change.

Women’s Wear Daily in May reported that ABG filed confidentially for an IPO and Bloomberg previously reported that the company was considering an IPO that would value the company at $10 billion. According to CNBC, ABG was valued in the range of $4 billion to $5 billion in 2019 when BlackRock purchased a 30 percent stake in the company for $875 million.

Bank of America Corp., JPMorgan Chase & Co. and Goldman Sachs Group Inc. are lead underwriters in the IPO. The company plans to trade on the NYSE under the ticker symbol “AUTH.”